Porridge?
Have as much of it as you want, and you can have all the porridge I haven't eaten!
Can't stand the stuff.

Bit of news regarding Wetherspoon's at Plymouth.
Sounds a bit smelly.

We are going round in circles on this subject on this forum.

It would run into thousands of pages.

I'm a Labour supporter and a Brexit supporter (but not the Brexit that the tories organised), and think Johnson is a prat, and Thatcher shouldn't have been elected in the first place, and FPTP should be consigned to history, and Corbyn was a thoroughly decent bloke, and Major was a prat but not as much of a prat as Johnson.

Get that lot out of the way.
Over and out.

Going round the buoy yet again.
The ship's crew are getting dizzy.

What's the significance of the square hole in the centre of the spoke key. I've a similar one but with a diamond ?

I have no idea!

Sociable in the pub, and out of it too.

When I go to pubs, I'll have a couple of pints and then leave. Rarely have more than two.

We have a thread about greeting other cyclists ........ and walkers, and people we meet.

No bacon this morning.
I had poached eggs on buttered toast.
Bacon tomorrow maybe.

We're having Steak and Ale pie for tea today, with gravy made from home-made chicken stock, and spuds, carrots and swede, cauliflower and broccoli.

Re: no H and L on mech screws

Rear mech is now Shimano Deore XT and recently bought another as they are no longer made. The spare I have was probably the last one anywhere. Photo of it newly fitted shows it still had a sticker on it. 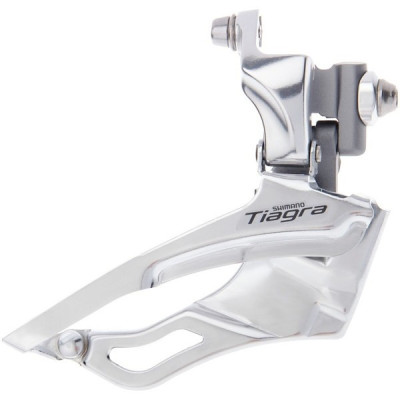 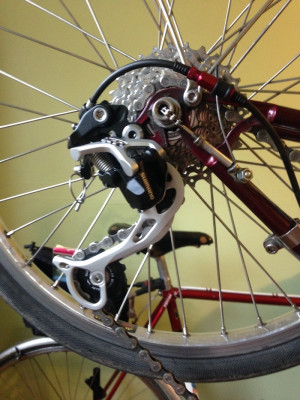 Hi John, and good evening.
I have a long thread on the subject on the Health section.

Précis about it:
Took "rugby balls" of statins - 80mg - for ten years.
I developed headaches and then severe headaches, plus aches and pains and stiff joints.
I put it down to being "old", but the headaches became so bad, only Cocodamol would work and I had to go to bed and sleep. Honestly, it was terrible.

One day, I read the leaflet in the stains packet (Atorvastatin) and saw I was suffering from almost all the side effects.
I was on Atorvastatin because the doc had tried me on other ones and Atorvastatin was the best for me ............ but ten years later it was awful in the extreme. Stopped taking them.

Spoke key!
Circa 1970's perhaps.
Still have mine - rarely used for many a long year - and use a Spokey Pro.

This one is my old one! 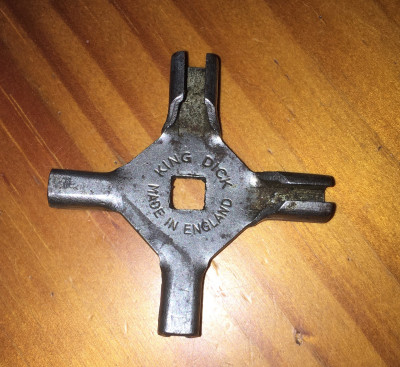 As for the Freestyle jacket, it says Sports on the label. Just looked.
Freestyle was a Plymouth manufacturer.
Boyfriend of our younger daughter was into kite-flying and often bought off-cuts from them. Going back to the early/mid 1990's then.

Re: no H and L on mech screws

My Shimano mech on Moulton doesn't have any plastic (other than the jockey wheels).
Second Shimano rear mech on that bike, and neither that one or this one, has any plastic.

Exactly TC.
You know better than most of us.
If you kill or injure someone, morals come into this of course.

Say one drives along and hit some railings or street furniture or something. One's car is wrecked. One has been drinking and is perhaps over the limit.

Some folk see the damage and phone the police, but meanwhile one walks down to the nearest hostelry and get legless.
The coppers and the courts don't have a leg to stand on either.

I enjoy my food and my lifestyle. Full stop.
Bacon?
Who gives a damn?

I believed you have high cholesterol. A good reason to look at your diet.

My high cholesterol is familial, and not dietary.
Had a blood-test check only a week or three ago and all was fine.

Take injections every two weeks on a Friday. Next one is on Friday this week.
Statins are the Devil's work.
Read my thread all about it.

Always makes my laugh, not only today.

The owner established the shop on the back of a pools or premium bond win in the late 1960's
Bought lots of bike bits from him, none of which i now have, apart from a pair of acrylic socks to stop the bottom of my jeans catching in the chain.

They had a glass cabinet under the counter with it sectioned off with Campag on one side and "other stuff" on the other.
I remember them saying that Campag was getting so expensive, they were going to stop selling it.

At the far end of the shop, they had the racks of clothing, and that's where my "Freestyle" Goretex jacket was hanging.
£80 ish back then, but it was worth it, as I still wear it ......... riding or dog-walking.