^that would be the obvious choice, or you could spend twice as much for something recumbent specific (like a Fastback frame bag).
Or, if you want more capacity. something from Radical 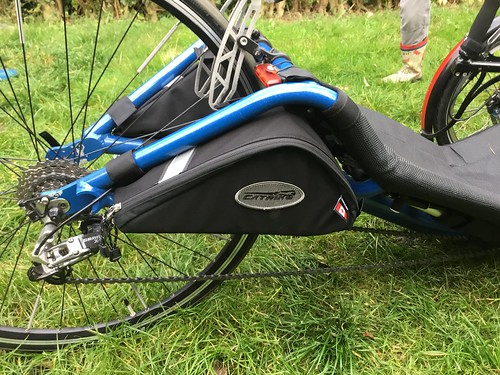 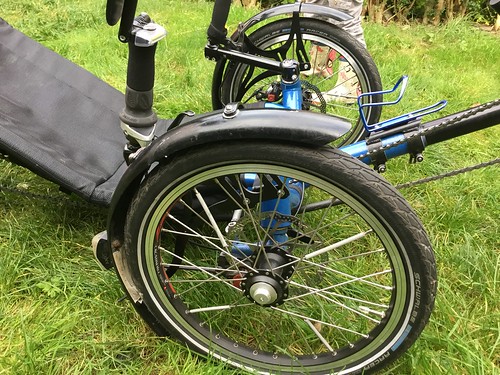 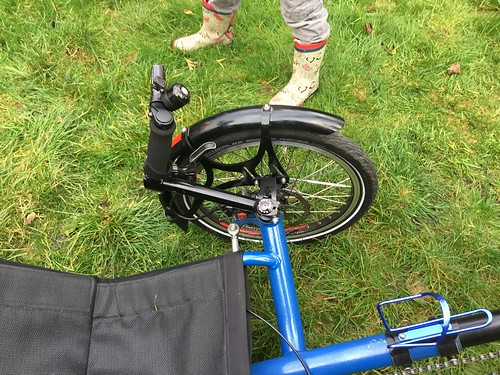 Mudguards were second hand (from this parish) and my LBS had to sort some alternative attachment for it. Bags direct from Arkel in Canada.

Carlton green wrote: ↑16 Oct 2021, 11:10pm Perhaps I’m looking in the wrong places but second hand load luggers seem to be quite expensive to me, and I’m rather surprised that your Christiana Trike didn’t sell for much more.

Well, we were happy to sell at that price because it worked out to be about cost we paid (including postage) + repairs. I think we paid £200 but had to rebuild the back wheel. I guess it's luck and timing as to the price you pay. Depends on your rush.

Bang per Buck I think this is the winning entry - it gives the most extra carrying vs a regular bike but is significantly less expensive than a Cargo bike.
...
That said, second hand Cargo bikes can be had for cheap, we sold our Christiana trike for £300ish (but buyer had to collect or sort collection via third party).

Another thought (more expensive for sure) would be a Circe Helios tandem adapted to be a longtail. Better for kid carrying/ferrying, has the additional "normal tandem" use and a good long tail hauler.

@UpWrong, we got our Tern HSD (not GSD) derailleur gear bike from Go Outdoors for about £3k. Go Outdoors are utterly crap so we had to pay about £25 in remedial repairs, swap new pedals and then we wanted further accessories. It's not really bang/buck unless it's replacing a car, but it is worth re-calibrating your thoughts on a starter bike now being £1k.

I used to ferry my twins in a trailer - riding fixed gear. Trailers are a really good plan and the added length just makes you more noticeable.

Not sure you want a bike to lug loads AND do the kid run. Kids grow out of being ferried about in a year or two - unless they are in some way disabled (like my daughter) or you want to do long rides with them. In both these cases you would be better off with something like a Tern than something like a bakfiets. We had a Christiana trike, but once we were only riding with one kid in it the weight and size made it not especially useful.

Do you regularly ride with bulky loads? If so then something like a cargo bike would make sense. Otherwise, use a trailer in reserve for those moments and get something that will allow decent load carrying and invest in some different panniers.

Currently my best load carrying bike is the recumbent - speedmachine. I can load as much as I want onto it and it still goes. Obviously something with double pannier rack, maybe a recumbent trike, would be better.

Re: Anybody with a recumbent trike in Gloucestershire?

https://www.ebay.co.uk/itm/224615614744
*cough* not mine *cough*
I would totally have gone for it, had I sold a couple of bikes. It's above a standard starter price, but comes with extras (streamer, bags, lights) which more than make up for it imo.

I'm open to selling my speedmachine 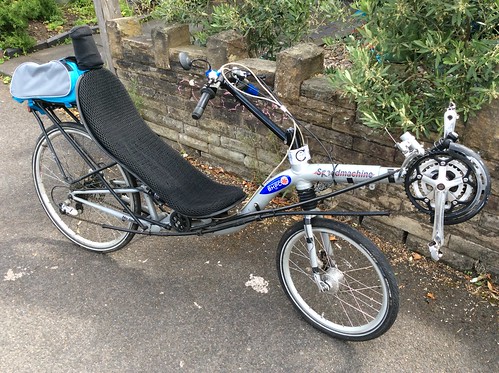 In their own words: https://www.hpvelotechnik.com/en/recumb ... road-bike/

Mine is much more used and abused.
It is basically a GT version of the bike, with front and rear suspension (air shock upgrade), hydraulic disk brakes (with pretty new pads), 3x9 Shimano speed (currently twist-shift, but I bought some trigger shifters that will go with the bike). It comes with a spare tiller and the option between the current setup and more race orientated Burrow's bars. Also has front dyno hub and I will include a front solidlight (upgraded) with the bike (cables permitting).

It's a decent bike, but I don't *love* it and given a choice I'd rather ride my Trike.

While it is in rather used condition, it works well and has lots of stuff with it, so £500 seems more than fair to me (especially when I see the spec in writing). Price does reflect that it will need to be collected from Birmingham (viewing welcome).

Re: My Ice Trikes Sprint on eBay

Commiserations on your need to sell and I hope you get a good price for it.

It looks like a lovely bike (but not one that I can afford).

Interesting, my experience of Evans is that they actually have cyclists working there and work more like a bike shop than that. But then this predates their purchase by Sports Direct.

I don't tend to buy new bikes for myself (I build my own or get them second hand) but the immediate move of change saddle, pedals, tyres and then maybe handlebars is pretty classic.
That said, I would expect bog standard cheapo pedals to at least fulfill their role. If you sell a bike sans pedals that's fine; if you sell it with pedals, they should work. If you're a shop that sells bikes you should be able to swap a defective pedal with another pedal from your big box of bog standard pedals.

I'm not sure I agree. You get a discount by buying volume and therefore it costs you less and you share some of those savings with the customer - meaning that you get the sale.
Either you have a bike technician to build/check the bike or you don't. If you don't I wouldn't understand why the bike manufacturer (Tern) would have you as a dealer. If you do, then why have an incompetent one when frankly you can underpay a qualified person as readily as an unqualified one.

I also don't think that Tern ship a number of pre-assembled bikes to the UK in boxes, I would assume they ship the parts in much more stackable boxes to be assembled in-situ. Otherwise, why have a local dealer at all?

Just been to my LBS because I couldn't get the gears indexed. Turns out the chain was too short and the gear cable was attached incorrectly.
Frankly, Halfords do better.

Issues included:
Chain too short
Cable attached to the shifter the wrong way round.

Yup, I was never going to figure that out.

(I think I haz the limit screws right.)

If I get the cable tension right to change the high gears (small cogs) then I can't shift to my lowest gear. If I increase tension to be able to shift the lowest gears (biggest cogs) I get a jump between gear 7&9 *small cogs, high gears).

I seem to have a choice between skipping gears or not changing gears on one click near the middle.

(And I was so pleased with my gear indexing on the 7 speed SRAM and all...)
Search found 1501 matches