Re: EE - No More Free Mobile Roaming from January

Asda mobile, which these days runs on top of Vodafone;

If you have a bundle you can use it as you would do at home, as long as you're in one of the European destinations below.

rogerzilla wrote: ↑18 Oct 2021, 5:48pm Magnets aren't ideal unless you are throwing away the balls, as they magnetise the balls, meaning they attract wear particles instead of sweeping them aside.

mm - can't help but think that's a bit too concerned.
Where are these wear particles swept to in a hub/headset?

I use ball end hex keys which came magnetized. The small ones from the set which just have slight magnetism. The bigger ones are more strongly magnetized and so pick up the neighbouring bearing as well, which you don't want of course.

So I'm essentially with MickF on this I think.

By matching the notches I assume you mean?
Am pretty bad at such things but will try.
Thanks.

Probably been mentioned upthread, but the canal and river trust shows showers on its canal maps.

but from a bit of time peering over I only managed to find one - at Greenberfield near Barnoldswick - funny, I have never noticed them when there - and even some places, major canal centres, where you would expect to find them don't seem to have them.

Part of the general poshing up of many pursuits I suppose - many boaters doubtless have their own very nice onboard facilities.

Still - useful for water taps in locked cabinets - more common - saw one at Salterforth just up the Leeds and Liverpool - if freecamping could be very useful for filling a water bladder of an evening.

Or two for a fiver on eBay.

tempting for sure - my lost one came from ebay for not a lot.
Do you have a link for one you have used?
As normal key copying can be often be wonky at the best of times.
Looking around there seem to be very few showers indeed but could be handy for toilets and water cabinets.

Just checked - I rather had the idea from previous delving into its depths that they were there.

As with all the POI data in OSMand you can get them to appear on the map or just search for them.

You get a bit of detail on each one though am not sure how up-to-date accurate it is - exanmples of info given - 24 hour (if they are), whether there is a charge and an indication of the amount, saw one which said "not monitored".

Have you greased the O rings?
I had a malfunctioning track pump once - greased the rings with some appropriate (ie O-ring friendly) grease and all was sorted.

There was nothing seriously wrong with the actual O rings.

thanks for all the reassuring answers on the key folks.
May well get another one from the Trust shop - seems to be around a tenner with postage.
Now off to research how many facilities/showers they have - I do get the feeling that there maybe aren't a lot - mainly concentrated at Marina's etc?
Was up the Leeds and Liverpool the other day on the bike - too captivated by the wonders of the Bingley 5 rise locks to explore any facilities that might be available there.

Oldjohnw wrote: ↑16 Oct 2021, 7:42am If I were a non-cyclist visiting a pub, whether or a Wetherspoons, I would probably not want to see half a dozen bikes in the bar.

Why can’t pubs have bike racks?

Fair point oldjohn - yep it couldn't become a general thing - you couldn't have lots in there and muddy MTBs would definitely I think cause issues- a line would have to be drawn - again I liken it to Northern's policy - 2 bikes on the trains but they will try to accommodate.

I only really known one spoons with proper bike racks (sheffield or the like) actually on their premises - I keep meaning to send them another mail about this.

I started the thread to highlight ones which are handy/accommodating for cyclists, laden or otherwise - hence I exclude a fair few which though wonderful pubs aren't very practical for cyclists.


Just for you a pic of a bike in a spoons - they batted not an eyelid though it was pretty clean and just inside the door [...] Pub is in York- The Postern Gate. Fine pub in a nice spot.

Probably not the most objectionable thing to get taken in one. I can see on Streetview why you need to take your bike in there: there's no bike parking or signs to it outside, just a nice big car drop-off/pick-up layby. The usual car-friendly spoons.

I could have sat right outside in extensive seating with my bike and ordered on the app as above.
As I have said at least once upthread, my definition of "friendly" is easygoing/accommodating - as they have many times proved to me.
Much preferable to box ticking.
Kind of similar in a way to Northern Rail.
Many many pubs wouldn't have let me take that bike inside.

jb wrote: ↑14 Oct 2021, 12:03pm My mate rates Wetherspoons but I haven't visited enough to form an opinion. I did however come out of one in Rotherham once to be greeted by a gentleman who requested if I had the time about me, obviously a prelude to a further request. Pointing out the irony of the fact that just behind me was one of the biggest town centre clocks in Yorkshire was somewhat lost on him.
Can't say I be over happy about leaving a bike there.

That calls for some more pics i think to reassure you.
Certain lack of real-world logic in your fear I fear.
Any views on leaving a bike outside london's Ritz?

Oh I've left my bike outside of some London pubs, touring luggage is a good deterrent I think - too many sweaty underpants to rummage through. But I don't go there often I hate these provincial little towns - so full of themselves.
Rotherham's nice.

well then if you've left your bike outside some london pubs you can doubtless overcome your wariness of leaving one outside a spoons wherever. London does of course have several/many spoons - some listed buildings.

Pic of a bike outside a spoons for you - they are quite often good for this as some of their pubs are modern, or have modern extensions, with lots of glass. I used to lead lots of rides for a london cycling group and we would sometimes cross the Downs to Oxted where we could see our bikes locked through the extensive glass. 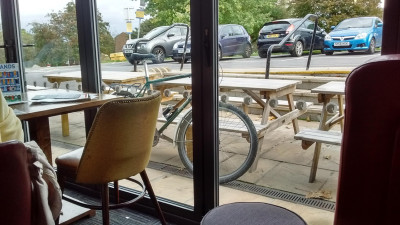 The Old Unicorn, Bramley, Leeds - swung by on a long ride for a pint of, er, Monkey Wrench, the app had told me was going.

I was sat inside.

As I was leaving, staggering under assorted bike gubbins a nice member of staff unprompted offered to fill my water bottle.

Sweep wrote: ↑14 Oct 2021, 3:59pm Certain lack of real-world logic in your fear I fear.
Any views on leaving a bike outside london's Ritz?

Not brill, but I'd be happier leaving a bike in the Ritz than in the poo-pub.

I've not actually left a bike in the Ritz but I think I've left a folding bike in the cloakroom of The Clermont Charing Cross which isn't far away.

"poo-pub"?
are we in kindergarten?

Don't know if you've ever been to the Ritz - I have several times - but I'd be amazed if you could take a full-sized bike in - unless maybe you were an oligarch they were grovelling to.

Just for you a pic of a bike in a spoons - they batted not an eyelid though it was pretty clean and just inside the door - I could have sat outside but it was early (not long after eight) and I fancied chilling a bit more - nice pic also of a fine local pint of Monkey Wrench - had to have this alone for breakfast as the kitchen opening was delayed due to covid-related staff shortages. But no matter - it powered me on an 80 mile ride which took in an ascent of Greenhow Hill. 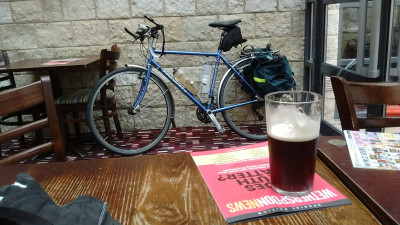 Pub is in York- The Postern Gate. Fine pub in a nice spot.

TrevA wrote: ↑15 Oct 2021, 1:59pm Now that Wetherspoons have their App, there’s no need to go inside to order beer, drinks or food, so no need to leave your bike. You order and pay at your table and everything is brought out to you. We regularly visit at our local Spoons after our evening chain gang and do just this. The bikes never leave our sight.

Very true - one of my bikes outside Winsford spoons - bike pretty much at table- the fine beer and the passable curry (salt in probably saved me from my regular post-long-loaded-ride cramps) were ordered from the tablet you can see on the table. 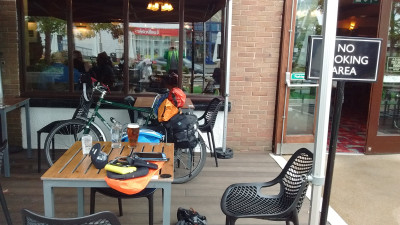 jb wrote: ↑14 Oct 2021, 12:03pm My mate rates Wetherspoons but I haven't visited enough to form an opinion. I did however come out of one in Rotherham once to be greeted by a gentleman who requested if I had the time about me, obviously a prelude to a further request. Pointing out the irony of the fact that just behind me was one of the biggest town centre clocks in Yorkshire was somewhat lost on him.
Can't say I be over happy about leaving a bike there.

That calls for some more pics i think to reassure you.
Certain lack of real-world logic in your fear I fear.
Any views on leaving a bike outside london's Ritz?

Never been sure - is it OK to just buy one of those keys or is that considered "sneaky"?

ie are you not really supposed to do it/maybe intended for bona fide boating folk who maybe pay some sort of subs?

I stress I'm not criticising you - I bought one once but lost it amongst my many keys and am not sure which one it is.

Is there are a charge for using those canalside showers?

Do they ever change the key?