hufty wrote:Paper maps are great - the batteries never run down and you get a great overview, so I personally wouldn't want a Garmin in the first place. I always found the OS 1:1250 000 Western Scotland and the Western Isles to be about right for road cycling. No longer available from the OS. Scottish map seller Nicolsons maps used to do their own version but didn't look so available a second ago.

The best source then is the mighty Aqua3.com for a customised, waterproof, extended width/height map.

Decided to order a map after reading this. Impressive service; map arrived yesterday and in my excitement I opened the envelope a bit too enthusiastically. The map ended up in the washing up but I'm happy to report it is indeed totally waterproof....

So many places have WiFi these days that if I need the Internet or email when out and about I prefer to use my Nexus 7. Browsing web sites on a small screen is guaranteed to frustrate. I have a smart phone on a low tariff but the smart features and data don't get much use to be honest. However Google maps on a smart phone with GPS is very nice when lost.

mercalia wrote:well re GPs. I had a thumb that blew up and started to puss when I pierced it. I thought it was due to having eaten some chesnuts and having peeled the shell off and a bit got under the nail. Well the lady gp saw it and sent me immediatley to the out patients with a note. I could see looking at the the out patients doc faces that the lady gp had in her mind to cut the thumb off! well I went in each day for a few days and they pumped anti biotic into my arm & that was that. dont trust what a GP says ( or thinks ) we now live in a consumer NHS the standard gp is a quack?

So your GP made an appropriate referral resulting in effective treatment and resolution of your condition?

Had a call from "Jonathan" at "Windows" today. He was calling about a possible virus on my Windows computer. I thanked him enthusiastically and we set about trying to identify where my Windows computer was. I had some fun with "what does it look like?" and "what colour is it?". When I sensed he was losing patience I said that I'd found it and it had a picture of an apple on the front. There was a pause after which he asked if I was using an Apple computer. I said I thought it probably was. I think the penny finally dropped then because he got angry and told me to ******** !

Re: I should have been wearing my helmet

Having read post#18 several times I see nothing more than a good personal story. Later replies to the poster do not give the impression of much respect for the post yet at no point did his post suggest that his opinion trumps all others on the matter of helmets. Are comments about lucky rabbits feet helpful? Is it reasonable to suggest medical professionals are deluded, or shouldn't offer advice unless they are also qualified materials scientists? If my GP suggests jogging would help my blood pressure does he really have a duty of care regarding the risk of twisting an ankle?

We all respect the differing opinions on the helmet debate, on which there is unlikely ever to be definitive proof, don't we?

Re: Dog walkers or horseriders?

Neither. The animals don't bother me half as much as people that have no respect for others. As regards accidents that i've been witness to on shared paths; one fractured wrist with serious dental injury in a cyclist was caused by another cyclist, and one dislocated shoulder in a cyclist caused by an out of control dog.

TonyR wrote:
You missed a major issue with your message analysis. If cyclists are not on the roads, motorists do not learn to expect cyclists on the road nor to know what to do when they encounter one (the safety in numbers effect). Keep the cyclists segregated away and they will never learn. Mix them up as is happening in London now and behaviours start to change. Motorists are expecting cyclists and look out for them and when they spot one they have learnt from experience how to react. So you are not training the cyclists. You are training the motorists. Training cyclists just helps train motorists quicker but the safest group of cyclists in London are the Boris Bikers because drivers know to expect them and expect them to be inexperienced and therefore make much greater room and allowances for them.

Training motorists by letting them encounter increasing numbers of cyclists - so that they can work out how to react when the come across them next time. But not actually training them as such; more "learn by your mistakes" so you'll do it better next time. While I agree passionately that it's the motorist that needs to be trained, I suppose I missed this major part of the analysis because I can't quite believe the suggestion is a valid one!

The rate of cycling injuries in London does not seem to be reflecting this particular part of the message:
http://www.standard.co.uk/news/london/i ... 76360.html

mcslaski wrote:New residential areas should have cycle routes factored in from the start. Where there's a will there's a way.

My village is 5 miles from town. Many live in the village also work in the town. An old railway line (closed in the 60's) links the two. Prior to 2000, commuters used either the A road (busy and hilly) or the back road (hilly, fast and graveyard for several motorcyclists). Now we have a cycle path along the rail line which is pancake flat. Every day it's used by commuters who I know would be using their cars to get to work if the cycle path was closed. Because the above ambitious projects are not working is IMHO not a reason not to abandon the idea.

The message which comes through on this thread seems to be:
- More integration of cyclists with other road users; train the cyclists who by exposure to heavy traffic will become more confident and therefore safer, while motorised road users become more tolerant and aware of the vulnerable human powered vehicles with whom they share the road. Such integration includes removing all cycle lanes where they exist and planning no more.

Have I interpreted the message correctly?

mcslaski wrote:New residential areas should have cycle routes factored in from the start. Where there's a will there's a way.

Mark1978 wrote:But there is an entrenched assumption that cycle lanes means the crap we have now. It need not be that way.

Vorpal wrote:I'm not certain that I understand. People commute to the same places that they shop, go to school, and live. How can we provide total segregation just for commuting? How can we separate leisure cycling form commuting in that regard? If anything, it is easier to provide segregation for leisure cycling.

The government has, or should have, a transport policy. Central to this should be public transport and the encouragement to use a bicycle rather than a car to go to the shops or to work. What's the average car journey? Probably about half a mile (I exaggerate deliberately, but I'm sure it's pretty short). Both of these central ideas are ignored, and it's not good enough.

mcslaski wrote:Intrigued to know what level of evidence would convince (if at all) helmet non wearers of their value, and if you advise young family members to wear, or not?

This is where the Thudguard comes in..... 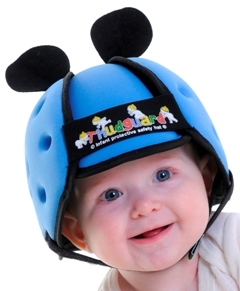 Head protection for children who are learning to walk, and a direct correlation to the cycle helmet debate

Neither has conclusive proof of their effectiveness

So given the equally compelling and comparative evidence, would you advise their use?

Nice. The big difference here of course is it's not the wearer who has the belief in using the head gear! But to answer the question, I wouldn't advise them and I'd try to resist the retort that this is a clear example, alongside the instructions in a packet of toothpicks, that the human race has really lost its way!

What we need is a complete physical separation between cyclists and the vehicles that kill or injure them.

How can that be possibly achieved?

It can't. Not even in the Netherlands do they completely separate bicycle and motor traffic.

In the Netherlands, segregated provision is most common on main routes & intercity or intertown routes. So, there is segregated provision where the roads have high speed limits, and/or are heavily used at peak times. In the centres and residential areas, they largely depend upon low speed limits, helped by zones where motor vehicles have limited access, pedestrianised areas, and infrastructure that limits the use of motor vehicles.

If we're talking about commuting, rather than leisure cycling, then I don't think this is impossible. It's undeniably difficult and would cost. I think we all recognise that there are large modern roads feeding our towns and cities. Some of them are clearly big enough to accommodate a protected cycle route alongside. Old rail lines and canal side paths should be fully utilised. Little used roads in old industrial parts of towns and cities are another example. New residential areas should have cycle routes factored in from the start. Where there's a will there's a way.

Vorpal wrote:Well, John Forester's opinion is that that is why so many cycle lanes are put in, to the detriment of cyclists. In the US, it's true that there are many kerbside cycle lanes in cities. They ignore data that cycle lanes make cyclists less safe. We see posts on this forum about how cycle lanes make people, especially novices feel safer. Why is that? Why would cycle lanes make them feel safer?

We can rationalise it all we want to... Cycles lanes separate cyclists from same-direction traffic, and slightly improve the safety of cyclists between junctions, but they typically worsen the safety of cyclists at junctions, where most motor vehicle - bicycle accidents occur. Why do cyclists, in the face of this evidence, ignore it, and request cycle lanes? If it was only highways authorities, I could say that it was due to prioritising for motor vehicles. But it isn't. Cycle campaigners around the world invest their time and energy into getting cycle lanes painted (or coloured) onto roads and streets.

Absolutely with you. Cycle lanes are ignored by motorists where I live. I believe the cycle lane contributed to my accident. What we need is a complete physical separation between cyclists and the vehicles that kill or injure them.

Interestingly my other half's belief system re: helmets is that, in wearing one she negates the risk of a contributory negligence claim were some tosser to knock her off her bike! She then goes on to say that she rides faster down hills with a helmet than she would dare without one! LOL!!