Price included a helmet - so pretty moderate for these days.

Custom painted helmet, no less. I think the budget would barely cover materials.


I would guess they are Curtis Odom hubs.

Thanks, I'm sure you're right, I'd never seen or heard of them before (referring to the Bilenky Shelly Horton bike, not the 'hands-across-the-pond' bike).

I've always had a notion for building a wheelset (not that I've ever built a wheelset but there's always a first time) using the high flange Zenith hubs from Spa Cycles (built by Novatec, apparently).

I know there isn't much comparison with the Curtis Odom hubs, they have cartridge bearings, the rear hub is for a freewheel but they look nice.

There's 1,636 in the UK according to Taginfo, so it's likely to be more than that number.

According to OSM there's a post box with an ER royal cypher, I presume it isn't referring to Elizabeth Tudor...

I knew the timescale was short but didn't realise it was that short! Contacted on May 23, to be designed and built by June 5!

Bilenky also build wonderful tandems - maybe they could build one for Joe and Jill. This is my favourite among many: 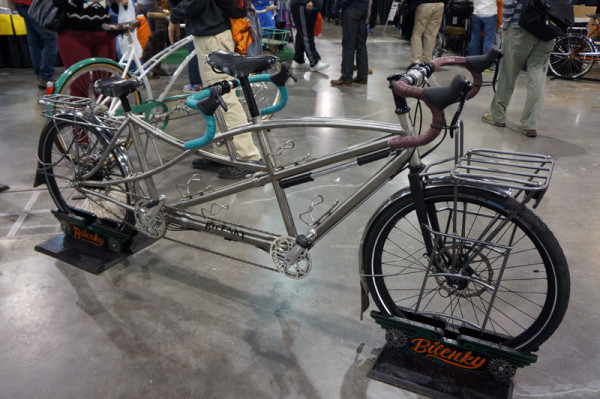 Bilenky are a rough looking, raggle-taggle bunch, though - their workshop is situated in a scrap yard - hard to believe they created the bicycle above, but there you go... 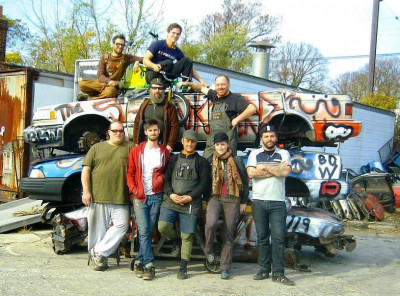 Young Ms Shiffer, who cut the lugs for the Shelly Horton mixte, should be easy enough to spot (everything being relative!). Steven Bilenky is the little guy with the cycling cap, the shades and the long beard.

Here she is cutting out the lugs (like I said she moved on a while ago to pursue a career in industrial design; she already had degrees in art and sculpture before she joined Bilenky)... 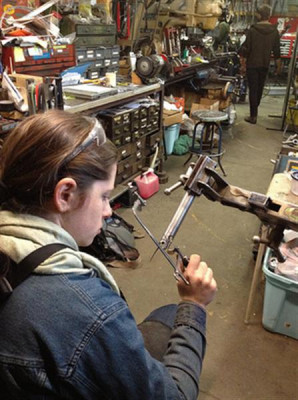 ...and with Bilenky's 'shop cat Ferdinand... 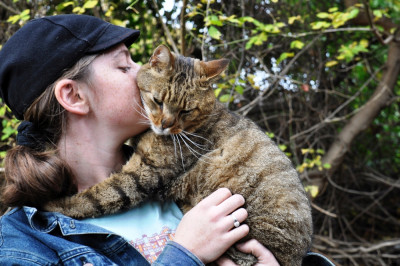 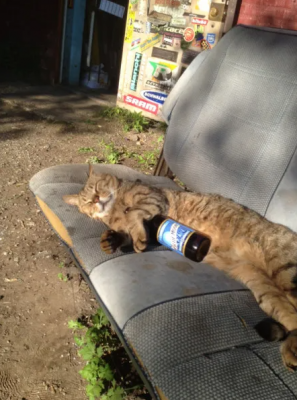 More details of the above (anyone got any idea what the hubs are?): 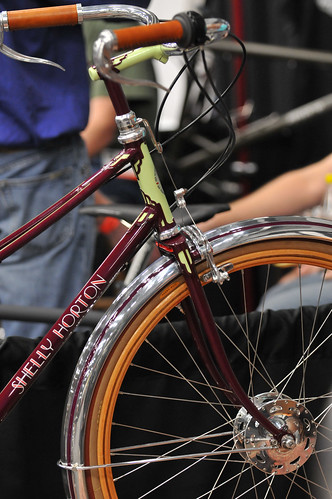 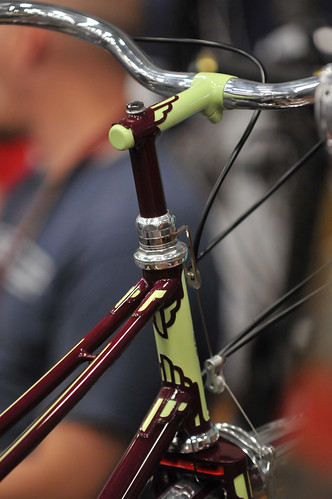 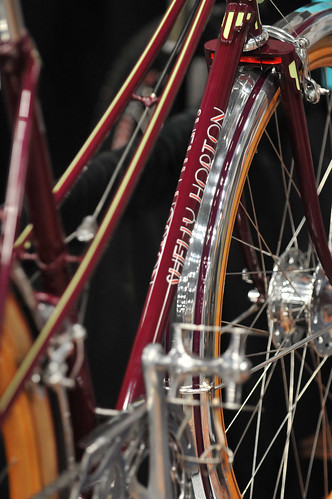 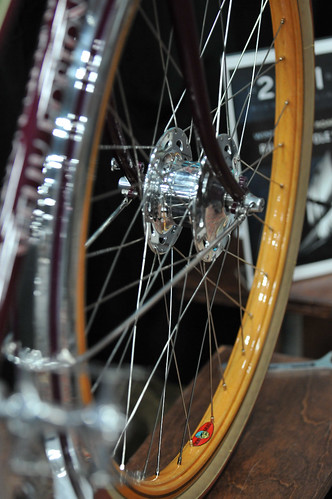 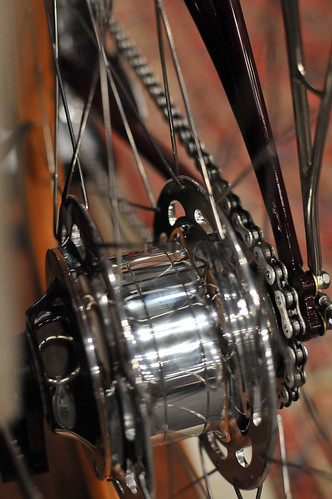 Bilenky Cycle Works, when they have the time - which they absolutely didn't in this case, apparently - have built some beautiful bicycles - this is the nicest one I've ever seen, just about - the Shelly Horton town bike, a mixte. Maybe not to everyone's (or maybe even anyone's) taste, but you surely have to admire the workmanship. 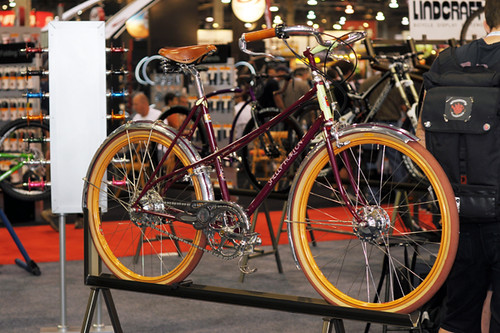 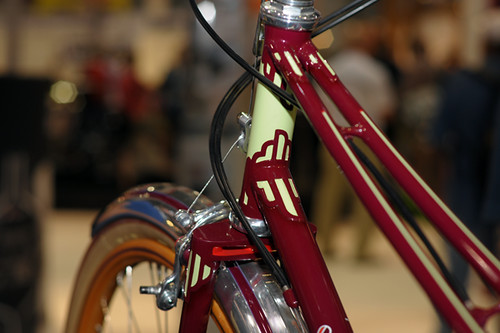 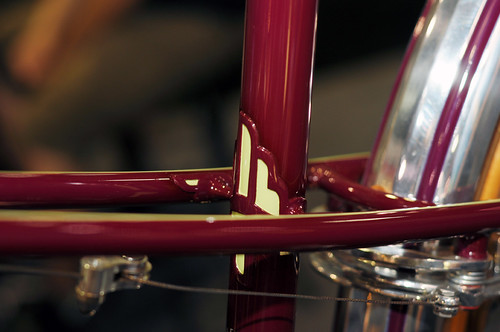 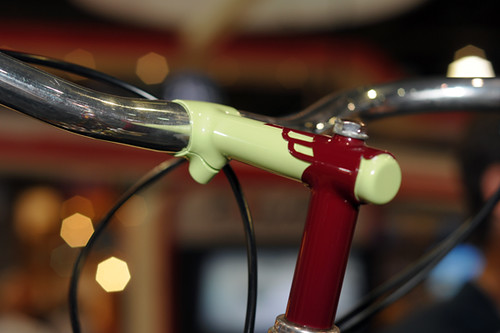 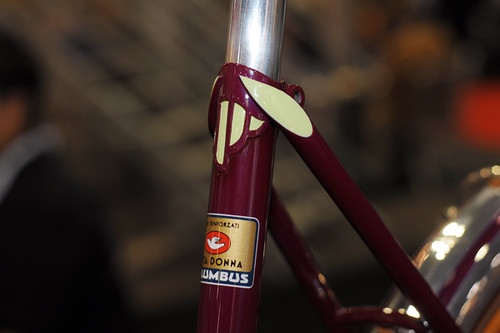 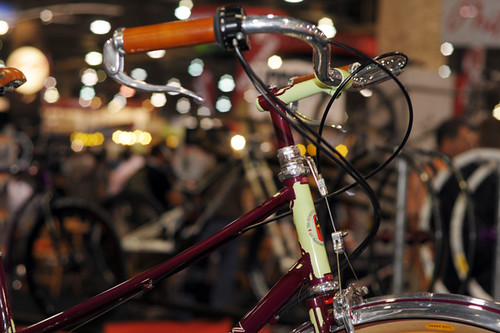 The bilaminate-style 'lugs' - effectively sleeves brazed over the ends of the tubes before they were mitred (the way Claud Butler built their 'lugs' post-war when no stamped or cast lugs were available) - were hand cut by Isis Shiffer, who now runs an industrial design consultancy in Brooklyn after studying at the Pratt Institute (she did her middle year at the Royal College of Art in London), although that was after she left Bilenky. She cut the sleeves/lugs with a coping saw in the style of an art deco door her boss Steven Bilenky had salvaged from a railroad station. Paint was by the legendary frame painter Joe Bell. The wheels had Ghisallo wooden rims.

The headbadge for the bike was made my Jen Green, who makes some beautiful headbadges 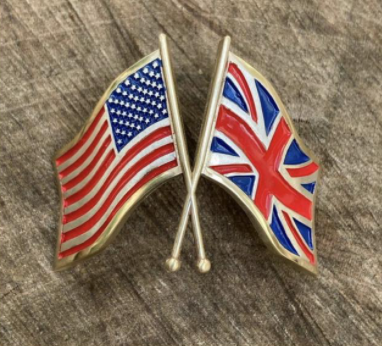 She did these for True North Cycles from Ontario, Canada 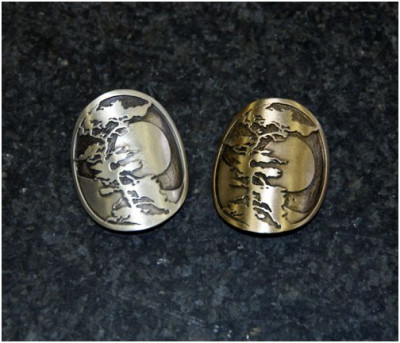 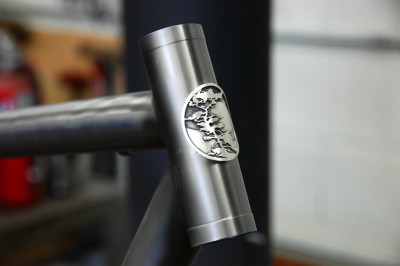 would appear to be very rare, esp ones displaying the scroll.

And this was doesnt even appear on the wiki page for Edward VII boxes
https://commons.wikimedia.org/wiki/Cate ... n_Scotland
Could I have made a new discovery exploring the Borders on my bike - LOL

There's also one on the corner of Arroll Drive and Auchentrae Crescent in Seafield, Ayr - it's a 'Category B listed building'! 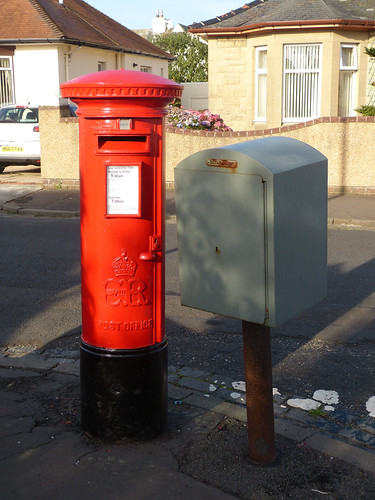 slowster wrote: ↑11 Jun 2021, 7:18pmList of links in Too Good To Lose to various posts by Brucey on Shimano hubs and freehubs:

Well done - glad you managed it!

Apologies for this being a vague and quite possibly stupid question - just thinking out loud but maybe not very cleverly - could you used a rawlbolt to remove and (hopefully) easily re-insert the dust cap in a freehub body, or just hubs in general, without distorting the cap?

RJ the Bike Guy on YouTube uses a blind hole bearing puller - he already had one - but it's fairly expensive to buy for all it will ever be used:

I've tried removing one by levering it out but distorted it and haven't bothered since, but removing it makes it easier to clean out old grease, plus I'd have to remove the dust cap entirely if I ever need to remove the cup (I've got the tool for that) to get at freehub body internals. I've got a freehub that tends to stick every now and then, just once per revolution. I've tried getting lube into it but although that helped, it hasn't fully cured the problem.

Sorry for the thread drift but just wondering if a rawlbolt could be used for another purpose, same principle. Or if anyone does it another way?

Similar but the other way around, I was at a local cycling festival in Troon, South Ayrshire, I'd just done a 100K and got talking to a fellow I didn't know. Quite a scruffy lad with a straggly beard, which is how I look in the winter but in the summer I shave my head or keep it cropped and shave off the beard, and this was in the summer. Perfectly pleasant chap he was, though, but there was something about the way the conversation went that didn't quite jibe - something just... off - something I wasn't getting...

Eventually, after about ten minutes of going places I couldn't quite follow he said, "Oh... so you're... not... Graeme Obree?"

I never said I was!

I made the mistake of telling my pals about it (it was too good of a story not to tell, though) and needless to say I've lived to regret doing so - now if I lag behind even slightly on a ride I get...

(In case anyone doesn't know who Graeme Obree is...)

Reminds me of a stock routine air stewards apparently go through if an uppity obnoxious 'celebrity' passenger who's giving them strife asks, "Do you know who I am?"

"No, sir/madam, I do not but I will try to find out for you." [Turns to colleague] "This gentleman/lady does not know who he/she is - do you by any chance recognise him/her?"

Krashper wrote: ↑6 Jun 2021, 10:23pm No, I won't be lining the frame. I thought about some stripes, like thin red ones but I've decided against it because it seems more fitting for vintage touring or racing bikes. These bikes weren't state of the art machines so I want to keep it looking humble.

Looking at Raleigh and Humber catalogues from the 1930's and 1950's, they do show lining on various roadster models, and I have seen it "in the flesh" on Raleigh roadsters from the 1960's. I suspect it was dropped on later models - I bought a 1970's / 80's model for someone a few years ago and don't recall it being lined.

You'll likely have seen this, but this is how it was done at the factory:

kylecycler wrote: ↑26 May 2021, 1:20pm There's no chain on the chainsaw. Apparently it's common practice at mtb events - like a much more extreme version of these whirly rattles folk used to take to football matches (a long time ago - so long ago that I'd forgotten all about them!).

Definitely - just about anything is less annoying than voovoozelas!

The rattles didn't just go out of fashion, btw, they were banned in the 1970s, apparently.
Search found 872 matches