BTW the only confusing thing about top swing and bottom swing is how anyone could possibly get it wrong.

Well I defer to your greater knowledge.
So for my benefit what are the advantages/attributes of top swing versus bottom swing?
Would I be correct in thinking that my Shimano Ultegra mechs are top swing?
My Simplex front mech is linear BTW.

The "top swing" is done for Mtb's where the space is rather limited due to short seat-tube or the linkages of the rear suspension and so on, then the cable routing, as well.
Just think of where the clamp is and then where the cage moves: in a Mtb "top swing" derailleur the clamp is lower than the cage, so the latter "swings on top of it". You can see it well in this image, look at the linkages: 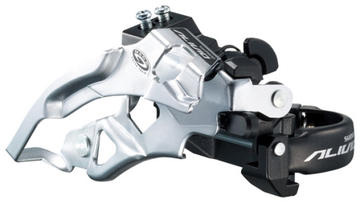 While the road bike derailleurs that we all know, if you see it from the front (or rear) you see that the clamp is higher than the cage, and the latter "swings under it". 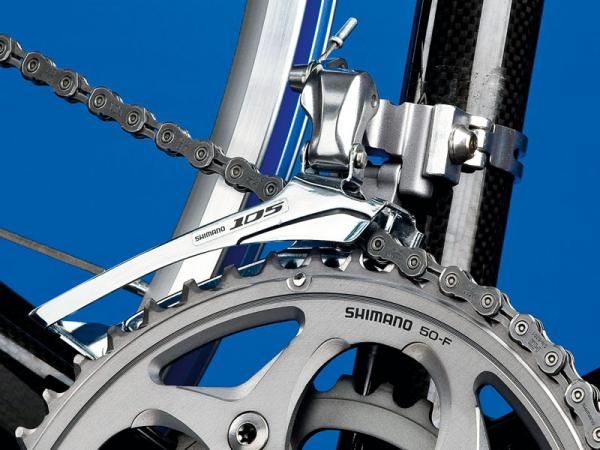 Re: Which Brompton tyre make/model are easiest to fit

Marathon Racers have little of the "marathon" name, being lightweight and with supple sidewall (which can be a bit fragile), so are fairly easy to fit especially on the new rims where the inner width is fully usable.

You can reshape that part, and once you fit the noodle (flexy ones can be made with the start portion of some Jagwire cable kits, or bought as new part anyway) you can use a small ziptie to keep the end of the noodle well inline with the yoke. A noodle that's not inline will often cause this problem, altogether with poor braking and friction in the cable.

However you can 'improve' them by filling them with better grease before installation.

Same you can do with external-cups bb's. It all depends on which ones.
I have been running five years on my Power-Torque bottom bracket bearings, still butter-smooth and the bike does no less than 5k/year of commuting in all weathers.... correct lubrication and just enough maintenance of the bike make things go a long way

I am yet to see an "off the shelf" bike with a BB30 that has been installed with good quality of bearings and enough grease around!

alexnharvey wrote:What is the inside diameter of the tube? Will an M5 bolt pass through? If it does you obviously could not thread at M5 and would need to go to M6. An M6 bolt might not pass through the holes on the rack though.

Gattonero wrote:A passing-through boss is actually a better option, if brazing is correctly done (and a steel bike from the '90s is most likely so) it acts as reinforcement so it's better.
You are to use a long bolt, and use a class 10.9 bolt (or Stainless 304 is acceptable) for improved strength, and long enough to use all the washers (large "penny" washers are better to spread the load) and spacers that you may need. And Nylock nuts. IIRC, the Tubus racks come with good fastenings anyway, but if you need a longer bolt you're probably looking to a 60+ mm length.

I agree with you on the first point about passing through being preferable and the nyloc nuts but I have some queries on some of your other instructions, which you supply with your typical authority

Why would large penny washers be needed when they will be bearing against the end of the tube, probably about 1mm wall thickness? A normal washer or even a narrow form washer should suffice.

Can you explain how you concluded that a 10.9 bolt is required and why 8.8 (for example, or 12.9) would not be sufficient for the load that would be carried on a front rack, given that the bolt is supported along it's length by the tube? Especially puzzling because an A2/304 bolt would be weaker in tensle strength than an 8.8 one.

I would guess that the bolt length is more likely to be around 30-40mm, it should be possible to bolt it on to a tourer without many spacers and so on.

Hey, I may apologize for my bad use of the english language that makes you feel my comment been done with "authority", but I'm not sure where you get this from.
Truth is that most people speak for having fitted a couple of racks in their life, while I've fitted several bicycle racks only in the last week...
But let's move on, brazed bosses on bicycle are almost always for M5 bolts. For example, older Colnago's were known to use M4 bosses for their bottle cage mounts, while some city/work bikes from north Europe would use M6 threaded bosses for heavy-duty rack mounts. Your forks are most likely to be either threaded or non threaded, but for an M5 bolt.
The class of bolt is related to the load you are going to carry and how safe you want to be: some people like me do not like to carry a lot of weight on their bike (I have a trike than can carry over 80kg

) but other may need to carry some relatively heavy stuff on their bikes. A class 8.8 bolt can be sufficient and the zinc-plated ones won't get corrosion too easy, the A2 bolts are tempting for most but if you want a rustproof bolt a 304 is a better choice, stainless fasteners react to stress in a different way from carbon-steel ones, with less chances to fracture (they don;t really have a yeld point).
A class 10.9 or above is more sensitive to rust so it needs some form of protection (there's several products that can be sourced from the automotive industry, i.e. the ACF50).

Play in the freehub is detrimental, because it is what leads to the pawls becoming misaligned and crack, or makes their spring to crack.
The difficulty in this is the narrow width of the shims, being barely 2mm (IIRC) between their OD and ID makes very hard to cut them by hand with scissors (commercial puch tools will simply deform such thin sheet of metal).
Ideally you want to recycle shims from old freehubs, some from other brands of freehubs (or even freewheels) can be rearranged to meet the diameter, it doesn't have to look pretty but only to stay snug in the inner core to avoid fouling with the outer part of the freehub or (worst) the bearings.
The new high-grade freehubs have a bonded rear seal that makes A PAIN to remove and rebuild the freehub (ask me how do I know) but it can be done, i.e. to "transplant" the inner of one freehub to another and make it fit to a specific wheel. I won't recommend to the faint hearted, though!
For lubrication, I use the Morningstar tool, works a treat with no disassembling required, like I've said many many times: 99% of the rolling components are killed by rust and corrosion (due to poor lubrication in the first place, and often none been followed by the end user). 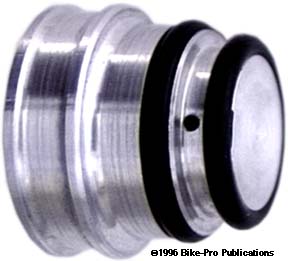 On the other hand, all this becomes often academic, due to the little time most people have available they'd rather use it for cycling than dismantling a freehub for a few hours when a new part will set you back around £25-30. A skilled mechanic with tooling and facilities can service a freehub in less than 20 minutes, but not the Average Joe...

Re: Handy stuff to have in your camping kit

I use a wooden spatula: great for making scrambled eggs and clean after. £1 from Wilko, can't go wrong with it!

If the BB has a BSA thread it couldn't be easier: use some 10sp cassette spacers, Sram ones are excellent because have a round ID.
More difficult is for an italian-threaded BB, you'll have a hard time finding a 35mm ID spacer.
But rather than messing with the chainset, altering the chainline and all that, just use some extensions for you pedals: cheaper, quicker, no fuss. What's not to like? £15 and sorted in seconds 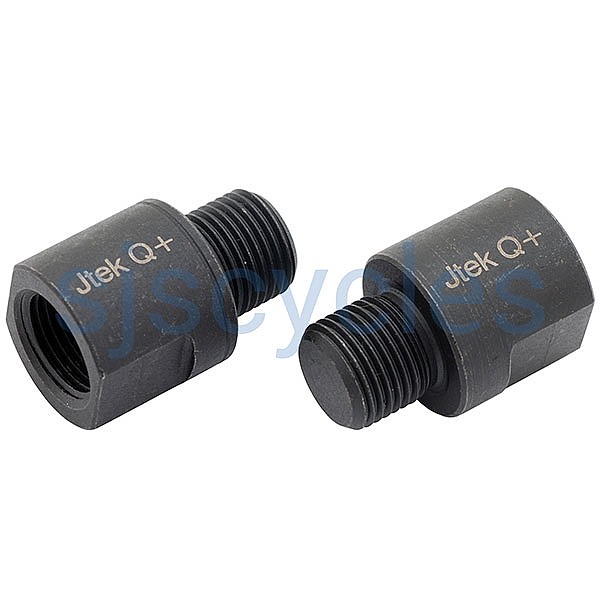 I won't be surprised if the seatpost is a 25.4mm size, a cheap frame ought to be made with thicker tubing.
And would not advise to measure frame with verniers, unless is to give a rough idea to narrow down the hunt for the correct size. This is due to the possibility that the end of the seat-tube is being ovalized for various reasons, like trying to fit a wrong size (too small or too big), or seatpost that was too short (which is likely to have permanently damaged the frame), etc.

Audax67 wrote:I used to use Vaseline, which you can get at any chemist's shop. Watch it if you stop for a coffee, though: it goes through and leaves bumprints.

Another advantage of the Sudocrem: when applied on the skin it will stay there

The pedal hitting the front wheel can be or cannot be a problem, it depends if the bike was designed to (for example, on a race bike is irrelevant) and how the user can cope with.
That bike is a 29er mountain bike. It is designed to go offroad where you've most unlikely to make a tight turn while keep on pedalling. Perhaps a touring/commuting bike, with room for mudguards too, would have been a better choice.

The semi-fluid grease suggestion sounds worth a try. Following a recommendation elsewhere on here I bought a spray can of Carlube 100+ SFG and it's very low viscosity and penetrates well so I'll be using that in future for my Aksium pawls I think.

The Mavic system is slightly different, oil is needed also to lubricate the synthetic (yellow) bushing that runs against the hub body, and to lubricate the lip-seal too. The latter makes a loud noise when left dry, I suppose it's a good thing to make sure the user follows the maintenance!
But the type of hub you have, yes can be lubricated with oil like the Finish-Line, just bear in mind will require more frequent lubrication, I'd say every 2k miles maximum.
Or you can try to find a real 00 grade grease, like the Morris K400EP (if you can handle a 12kg pack!)

Re: Which Brompton tyre make/model are easiest to fit

It is actually true the opposite.
The older single-wall Brompton rims had a narrow well, and using a very narrow strip of rim tape this was prone to move around causing the nipple heads to poke the inner tube. Also the narrow well, beacuse more than half of the internal width is used by the cavity of the rim extrusion, makes for very little room to fit both sides of the tyre in.
The new Brompton rims are true double-wall, and their inner is round-shaped which makes for an usable well, so it's a lot easier to fit tyres on the newer Brompton rims, also very unlikely to move or twist the rim tape.
Bear in mind that Schwalbe tyres are known to have issues when seating along the bead, regardless of the rim. It happens that some portions of the bead "do not come up" so the tyre will ride like having a "hump". You will need to brush the tyre beads with water&soap, then pump to 100-110psi (don't go mad, especially if your rims are worn) to get the tyre seating correctly.

A passing-through boss is actually a better option, if brazing is correctly done (and a steel bike from the '90s is most likely so) it acts as reinforcement so it's better.
You are to use a long bolt, and use a class 10.9 bolt (or Stainless 304 is acceptable) for improved strength, and long enough to use all the washers (large "penny" washers are better to spread the load) and spacers that you may need. And Nylock nuts. IIRC, the Tubus racks come with good fastenings anyway, but if you need a longer bolt you're probably looking to a 60+ mm length.
Search found 3717 matches