If you want good advice & entertainment
Ozcycles, Velotrace for all things Chinese.
Engineering Hambini takes some beating but be prepared for fruity language as he is autistic. This will lead you to many other great channels.Enjoy

Re: Luck counts for more than a helmet

pedalpower2 wrote:In the 1950s long before helmets, I was involved in a collision with a car and woke up several hours later in hospital. However I suffered no real injury.Many years later a friend of mine was out on a windy day and was knocked off by a guy on a moped. She hit her head on the kerb and despite having a helmet was rendered blind and died a fortnight later. So take your chance, crossed fingers are probably just as helpful.
pedalpower2

Sorry to read about the loss of your friend pp. Back in 1967 giving my mate a lift to work on my motorbike a car pulled out on us from the kerbside resulting in us both being thrown through the air.
I was wearing a Stadium Jet crash helmet and he , legal at that time , wasn't wearing one.
It was me that needed to have stitches in my head and he got away injury free. Go figure.
Having had this experience I never wore a cycle helmet for years but decided in the end to wear one as most other cyclists were. Again go figure.

matt2matt2002 wrote:I met Mark for 10 mins in the Braemar carpark 3 years ago.
I had just returned from a short trip in Ethiopia, so we chatted about the Nile gorge.
He struck me as a very friendly guy and I was over the moon to met him.
I wish him well.

Ditto
I met Mark before and after a presentation he did in Tunbridge Wells after his first world record.
Smashing fella who also has a lovely mum.
I too wish him well.

should politics be banned on the forum?

Moderator note: this was split off from the thread about Brucey

Vetus Ossa wrote:Well I miss Cyril as well, am I alone here?
Cyril, please come back and amuse me.

You're not alone.
I'm also sorry Reohn2 no longer posts.

I am going to have to check this out now as having exchanged PMs for several years. I regard Reohn2 as being a friend. Smashing bloke. Now catching up on this thread its interesting to read that I am not the only one who has lost a bit of love for this Forum.
Someone once accused me of being a racist for a posting I made and that is the last thing I am. I wonder whether politics should now be banned.

SimonCelsa wrote:Are they Brasher Boots I spy there. The old style, not the new Chinese manufactured clogs?

That's an interesting question SimonC because I hadn't used them for some and for some reason I thought I would dig out my Brasher boots out and go for a walk. Turns out that they are actually Zamberlan Ibex good but a little heavy so I have brought some lighter Berghaus boots. But its interesting to read Brasher boots weren't what they once were.

thirdcrank wrote:That sounds like snakebites from hitting the pothole and then the refitted tube having a but trapped under the bead which exploded on inflation

spot on tc. I have since learnt to reflate the tyre with a bit of air in the tube. Sadly I had also made the mistake several times before.

Re: Best wishes for Brucey

Only just seen this and very sorry to read it.
Brucey is our Sheldon Brown on here.
Best wishes to Brucey for a speedy recovery. Ted

Tonyh wrote:I have now had four punctures in two weeks and only out on the bike six times and all on roads. All four punctures have been on the back wheel and I have taken the bike to the local repair shop for a new inner tube each time, but am now wondering if there could be something wrong with the back wheel to keep getting these puncture.
Its annoying because I had gone nearly four years without ever having a puncture.
Is there anything I should be checking or would you recommend me purchasing a set of puncture resistant tyres I was recommended these
Bontrager gr1 team issue 700x35
My bike is a Trek Duel Sport 1
Thanks for any help

Hopefully this will make you feel a bit better. 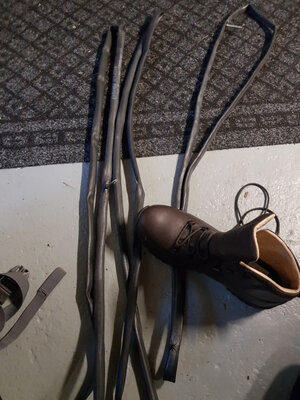 Three on one ride at 5.30am 2 on a pot hole and one newxtube exploded on me . Might have to review just carrying 3 spare tubes

pedalsheep wrote:I'm back to square one as my problem is I don't have an Android device!

Why don’t you persevere with the computer? It’s got to be possible just contact them. My OH contacted them re using IPad and they responded with helpful information within 15 minutes.

We were pleased our Eurosport subscription is still active as GCN live was down this afternoon.

Ditto Glad I had gone for the belt and braces method. Already watched some great videos on GCN +

Mike_Ayling wrote:There are 15,000 journals on CGOAB so wherever you may be thinking of going someone has probably been there already.
Borders may open and close and governments change but the roads usually remain the same.

The forums there are dead apart from Neil's long rambling posts and the odd word of support from his supporters.

For information on camping gear, panniers etc look in this forum or the "commercial" forums such as Cyclechat and the huge American Bike Forums.

Forums at Cycle Blaze are very quiet and most of the members there are well funded retirees and do the credit card thing.

Could not have worded it better Mike.

simonhill wrote:Lucky that you have enough free time to browse Crazyguy for such informative gems.

I think you're right, tons of boring stuff only interesting to the traveller but now and then you get a gem.
I look at journals, read a couple of pages and move on if it shows endless boring photos of meals etc and not much else.
Some travellers write fascinating journals and are great reading.
I followed one chap who cycled around the world and I checked in every few days to read his latest submission. I felt I was on the journey with him but from the comfort of my armchair.

Yes there are some great journeys amongst the dross. This one’s a real timepiece (1977) https://www.crazyguyonabike.com/doc/?o= ... 4872&v=75R a small town kid seemingly obsessed with how much everything costs.

Mmm probably less than a skilled worker could earn in that time period.

zenitb wrote:
So looking at your response hondated and trying to find an answer to my quesion of "What do people find useful/refer to on his site?" I see you are saying "I spend hours on there reading journals". so... from that it looks like peoples inspiring travel narratives/ideas are the main draw ?

I think that's a fair assessment on why I enjoy it , but clearly others have different opinions which they are entitled to have. However I think if your disputing the wealth of Neil then you should back it up with proof. I have mine in that he has a running appeal. Political opinions let's not go there as I have mine and many may agree or disagree with them but they're not something I will express on this Forum now.
Finally it's hard enough to begin or answer a thread on here let alone post a journal so people shouldn't imo be knocking those that have the courage to write a journal.

Hondated, when you say "However I think if your disputing the wealth of Neil then you should back it up with proof" I am not sure you have understood my post. I merely expressed a preference for the cycling UK forum - I am not sure I "should have to back it up with proof" after all this isnt a court of law. If it helps though the consideration of older equipment, focus on UK and European touring, and frankly the huge amount of technical help I have received means this forum is very much suited to my needs. Cycling touring across the US to Niagra Falls less so. Hopefully that makes sense

Apologies as my reply was to nsew

zenitb wrote:Maybe its living in the UK but I've always found this forum more helpful than the "crazy guy on a bike" stuff. I am not a world tourer/super expert though. What do people find useful/refer to on his site? I am genuinely keen to hear....

I am surprised to read this in some ways but not in others.

If you have any interest at all in cycle touring then there is really only one Forum to go to and its CGOAB. And if you have I would recommend both going on it and considering giving a donation as Neil needs it to help him survive.
I spend hours on there reading journals and just wishing I too had done some of them when I was younger and fitter.

But that said this Forum is hard to beat when it comes down to seeking advice from others with anything cycle related. I do think there is a clique on here , but there is in most clubs or groups of people , and I have fallen foul of it several times but in the main everyone seems to jog alongside each other nicely. Via PMs I have also made more serious friendships as well.
Along with Cyclechat these are my three go to Forums when I need to get away from Youtube cycling videos. Oh I wish they all existed when I was younger.

So looking at your response hondated and trying to find an answer to my quesion of "What do people find useful/refer to on his site?" I see you are saying "I spend hours on there reading journals". so... from that it looks like peoples inspiring travel narratives/ideas are the main draw ?

I think that's a fair assessment on why I enjoy it , but clearly others have different opinions which they are entitled to have. However I think if your disputing the wealth of Neil then you should back it up with proof. I have mine in that he has a running appeal. Political opinions let's not go there as I have mine and many may agree or disagree with them but they're not something I will express on this Forum now.
Finally it's hard enough to begin or answer a thread on here let alone post a journal so people shouldn't imo be knocking those that have the courage to write a journal.
Search found 2382 matches