Powdercoating can look good if (a) the frame isn't lugged and (b) you pay for an extra lacquer coat, which gives it the gloss of normal paint. There's usually something minor wrong when it comes back, but you pays your money, etc.

One came up on eBay. Finally. The chap who used to make the repro racks stopped a few years ago, btw. Found it in the magazine.

How has it failed?

Thorn expedition tourers are odd - very floppy steering, too quick by road racing standards. But they don't try to wag their tails when you honk up hills with 40lb of gear on the back, so they are well-designed for the job, even if not the best to ride unladen.

As an aside, I congratulate you on spelling Kirkby correctly. I've lost count of the number of Moulton enthusiasts who insist the place is spelt with only one k.

Half my family are scousers and the other half are wackers, so I have no excuse!

You should see their idea of frame alignment. The main frame is ok, but the spike...

I'm tempted to dock it to 2" and cap it. But then the seat tube might break. 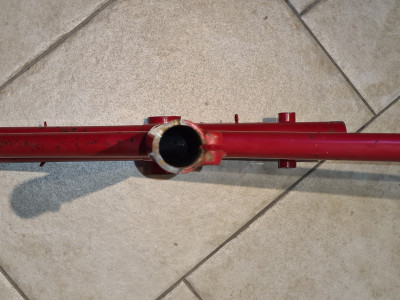 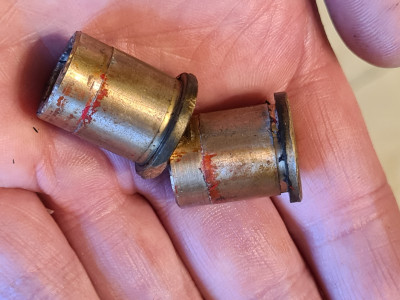 If only that were true

Early F frames, certainly until 1964, had brass or bronze bushes, and they can be well stuck in place. Bikes built in Kirkby, a factory with standards that would make the worst Chinese tat foundry blush, are especially bad, as apparently the pivot tubes were under-reamed and they just forced the bushes in. And they didn't know what grease was.

I have a 1964 Speed currently soaking in Plus Gas. The bolt and pivot are out, which is half the battle. The bushes apparently need drilling out in some cases. I really hope it doesn't come to that.

The Moulton (and Brompton) have little trail because of their small wheels. The distance between the tyre patch and the point the steering axis intersects the road is only about half that with a 700c wheel, if the head angle and offset were equal. You could add trail with less (or zero) offset, as you say, to make the bike less twitchy.

Moulton F frames also suffer from changing steering geometry under braking (the head angle increases as the front suspension dives), something addressed to a greater or lesser extent by the leading-link designs of the AM, TSR, etc.

Anyone got any that are in spec (at least 1 9/16" long, excluding collar) that they would be willing to part with? Mine turn out to be under 1 1/2" long on two hubs, which explains the slipping in gear 2. I expect someone left them parked in the wrong gear for decades!

Tunnels are periodically very expensive to maintain and cyclists don't pay to use them (directly). I'm amazed any are open to us.

I've never seen it quoted. Remember it slackens when you sit on the bike, as the rear end squats. How much, depends on the type of suspension block.

M5 on anything recent. 2BA on older British bikes.

The only time I use a weakly magnetic pointer is for M323 or M324 pedals. One of the races is so deeply recessed that it's the only way. The stickiness of the grease has to be stronger than the magnetism.

If you did, you'd see ball bearings are rather easily magnetised, and stay like that. So any metal worn from the races or balls sticks to the balls. Unless you have a microscope, you wouldn't see them.
Search found 2017 matches