Gov is proposing to trial 48 tonne HGVs for deliveries/collections of freight within 50 miles of rail terminals, using suitable routes. Normal limit is 44 tonnes.

It could encourage more long distance freight to be carried by rail rather than road (reducing pollution; reducing road danger).

But would heavier lorries pose an increased danger if cyclists share these routes?

Could it set a precedent for wider adoption of heavier vehicles?

Re: eBike Conversions - Go on, show us yours!

I've written up my first ebike conversion project, which may be useful for anyone considering converting their bike: DIY e-bike conversion - how hard can it be? https://untroubledtravel.blogspot.com/2020/04/diy-e-bike-conversion-how-hard-can-it-be.html

It covers my views on some of the pros and cons of crank and hub drives, batteries and suppliers. Some of the technicalities and tools needed for fitting a rear hub kit are described in detail. I'm not a professional bike mechanic, but I have changed cassettes and bottom brackets before and thoroughly enjoyed doing this project. 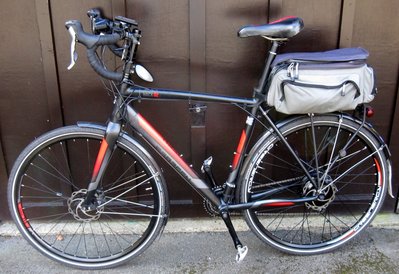 From April 2019 the benefit threshold for the first £100 of the donation will remain at 25% of that amount. Charities can offer an additional benefit of 5% to donors on the amount of the donation that exceeds £100. (https://www.gov.uk/government/publications/simplification-of-donor-benefits-rules-for-gift-aid)

I buy commuted membership every 5 years (5 years for the price of 4), which can easily top £100 - so I could receive slightly more membership benefits as a result of the change in legislation.

Perhaps the minister will need to declare a personal interest when he receives a claim for knocking a cyclist off his bike. In his defence, maybe cycle lanes were to blame? https://www.theguardian.com/politics/2016/dec/15/chris-grayling-sent-cyclist-flying-with-his-car-door-video-shows

Thanks to everyone for their useful contributions on the government proposals. But can anyone answer my original question:

What support will Cycling UK, or the law firms it recommends, give to members involved in small claims for compensation?


Or should I assume the answer is none?

Perhaps an example of the law of unintended consequences. In trying to clamp down on spurious whiplash claims they hinder legitimate injury claims

According to Cycling UK "Plans to reform the claims process used by motorists seeking compensation for whiplash injuries are set to leave cyclists and pedestrians with legal bills if they need to make a claim that’s under £5,000." http://www.cyclinguk.org/press-release/2016-12-05/whiplash-claim-plans-cause-backlash-cycling-community

What support will Cycling UK, or the law firms it recommends, give to members involved in small claims for compensation? Perhaps an increase in membership fees would cover this, while motorists benefit from reduced insurance premiums?

You will find a link to the government consultation here: https://www.gov.uk/government/consultations/reforming-the-soft-tissue-injury-whiplash-claims-process

It detracts from any idea of being treated as a valued member, especially when the only way to avoid these annoying, disruptive ads is to unsubscribe and not receive this member benefit. Why should I have to stop receiving what is promoted as being a member benefit, just to stop these unwanted adverts?

Also, email users are constantly being warned not to click on unexpected links in emails. Maybe I should mark it as spam.

What do people think about the unsolicited commercial adverts that suddenly started to appear in Cycleclips emails a few weeks back - no consultation on that one. I believe this breaches the anti-spam law http://www.legislation.gov.uk/uksi/2003/2426/regulation/22/made) and my complaints to the Head of Communications & Campaigns have not been answered adequately.

I am strongly against any advertising. I pay an annual subscription to avoid having to put up with distracting adverts.

Thanks - as there was only one I wasn't expecting to have to select it.

I tried using the 'Write to your councillors' link on the Space for Cycling campaign page. It found the relevant councillor for my postcode (not in London), but failed to come up with a template letter to adapt. Does it work for you? Here are the steps:

Select 'Write to your councillors' link...

This just has a Go button and no text for the letter your are sending!

I have developed a firmish lump inside my right forearm about half way between palm and elbow. I’m wondering if it could be linked to use of my SRAM Double Tap drop-bar gear levers. Perhaps some form of repetitive use injury? Each operation of the gear paddle requires a long, firm press with the fingers and causes the tendons and muscles in that part of the arm to contract.

It’s only in the right forearm, which does a lot more gear changing than the left.

OK, it could be a lipoma. I wouldn’t describe it as a soft fatty lump, but I’m not sure how firm a lipoma normally is.

Has anyone else experienced this?

Re: No more CTC technical officer ** NO HOAX **

Having relegated ‘Cyclists’ Touring Club’ and the winged wheel in favour of ‘CTC the national cycling charity’, how long before another expensive rebranding exercise brings us to ‘Cyclists - Britain’s cycling charity’ and we go the way of ‘Ramblers – Britain’s walking charity’.

, but for some charity executives’ careers it could just mean ‘charity to charity’, so touring and technical advice for members (and non-members) has little benefit when money can be spent on raising the profile of the charity through marketing and communications instead.

It's a Shimano Deore M591 Rear Mech / MTB, purchased in Feb 2011. Like this one:
[url]http://www.chainreactioncycles.com/Models.aspx?ModelID=40543&gclid=CMbapf6Qq7ACFcshtAod0keITA[/url]
Search found 24 matches