When you push down on the pedals, the "equal and opposite reaction" of Newtonian physics helps to support your torso, cantilevered out in front of the saddle.
As we get older, we push less hard on the pedals, so there is less reaction to support the torso. (anybody who thinks this will not happen to them......good luck with that!) So now there is a choice; alter the riding position or put up with more weight on your hands, with the attendant sore neck, shoulders, wrists, carpal tunnel syndrome etc.
The most effective way to get weight off your hands is to move the saddle back. Audax 67 is right in that this will alter the relative contribution of different muscle groups to the pedalling effort; moving the saddle back recruits the glutes and hamstrings and (relatively) spares the quads. .....however, when you move the saddle 5 or 10mm at a time, in my experience the muscles seem to be able to adapt.
Bike fitting D.I.Y. .....http://wheel-easy.org.uk/wp-content/uploads/bike-set-up-2017a.pdf
Tracks in the Dales etc...http://www.flickr.com/photos/52358536@N06/collections/
Top

That does seem counter intuitive though.

As you get older you want a more upright position and moving the saddle back creates a more stretched out position all things being equal. I would have thought a shorter stem would make a bigger impact???

I might be talking rubbish and Colin is the expert.

The most effective way to take weight off your hands is to move the saddle back. More effective than raising the bars, or moving the bars nearer.
Having moved the saddle back, a shorter/higher stem may well be appropriate
Bike fitting D.I.Y. .....http://wheel-easy.org.uk/wp-content/uploads/bike-set-up-2017a.pdf
Tracks in the Dales etc...http://www.flickr.com/photos/52358536@N06/collections/
Top

As you get older you want a more upright position and moving the saddle back creates a more stretched out position all things being equal. I would have thought a shorter stem would make a bigger impact???

I might be talking rubbish and Colin is the expert.

Maybe another way to think about it is that the saddle isn't going back, rather that the pedals are moving forward.
Top

531colin wrote: ↑17 Sep 2021, 8:11pm The most effective way to take weight off your hands is to move the saddle back. More effective than raising the bars, or moving the bars nearer.
Having moved the saddle back, a shorter/higher stem may well be appropriate

I knew that.
Top

Unless I buy a further set-back seat pin, I cannot move the saddle any further back. Would a longer stem produce the same effect?
(I have a longer one I could fit)
Mick F. Cornwall
Top

Unless I buy a further set-back seat pin, I cannot move the saddle any further back. Would a longer stem produce the same effect?
(I have a longer one I could fit)

Based on my own experience I would say not. I have a large collection of different stems which I purchased in an unsuccessful and very frustrating attempt to improve an unsatisfactory position on a new bike after a long lay off.

It was 531colin's posts and bike fit guidance that brought it home to me that the problem was a steep seat tube angle (74 degrees) and a short railed Brooks saddle, combined with a deterioration in fitness/power output which had moved my 'balance point' further back. Fortunately I was able to buy a new seat post with 10mm more set back, which has fixed the problem.
Top

I think that Colin531's advice on bike fit, and the page on the subject he has in his signature, is the most useful single piece of advice I've read, for me, on this forum.

The fact that he also designed frames for an outlet near to me is an added bonus.

I’m having a good look at the VN Boreas as well.

The owner of the website replied on the Enigma saying it’s a 2012 frame according the the receipts they have.
Top

De Sisti wrote: ↑18 Sep 2021, 12:11pm ...............
You're the one with the attitude, with your "I know it all and you should follow my lead" patronising comments. People are allowed to have a different opinion to you on a forum
without being belittled and patronised. You've been on here for such a long time that you
do not realise when you're doing it.

Some things are a matter of opinion; if the question is "what is the best colour for a bike?" then there is room for alternative opinions.
Other things are a matter of fact, and its my opinion that there is little use for "alternative facts" in cycle mechanics. Other opinions are of course available.
Bike fitting D.I.Y. .....http://wheel-easy.org.uk/wp-content/uploads/bike-set-up-2017a.pdf
Tracks in the Dales etc...http://www.flickr.com/photos/52358536@N06/collections/
Top

Unless I buy a further set-back seat pin, I cannot move the saddle any further back. Would a longer stem produce the same effect?
(I have a longer one I could fit)

Altering the stem would alter the "reach", but not the angle your legs are at, so there is no substitute for having the latter right for you. The only thing I can think of that will do the same job as having the saddle further back (if that is required) is having your cleats further back on your shoes, which takes your feet further forward in relation to your bottom. The downsides of that are that such a change in cleat position may adversely affect your pedalling and it may bring your feet into contact with your guards, so it is a drastic step to take.
Top

Thanks guys.
Yes, it's a Brooks and it is as far back as it will go.

It not's my legs or feet or power delivery, but my hands and arms aching, though they feel better if I hold the tops rather than the hoods.

I suggest that it would be better to have a SHORTER stem, rather than moving the saddle.
Valid thought?
Mick F. Cornwall
Top

Mick F wrote: ↑19 Sep 2021, 2:53pm I suggest that it would be better to have a SHORTER stem, rather than moving the saddle.
Valid thought?

Firstly, not if you accept the principles 531colin outlines above, and upon which his bike fit guidance is based. In other words, if you accept that the force of pushing down on the pedals simultaneously also acts in the opposite direction to support the weight of your upper body against gravity, then it follows that:

a) less force pushing down on the pedals, e.g. due to reduction in fitness, injury or ill-health etc., also means less support for the upper body, and

b) the arms, shoulders, wrists and hands have to bear an increased load to make up for that reduction in support.

If so, changing stem length/moving the hands closer to the body will not make much difference, because whether they are 2cm closer or 10cm closer, they still have to bear that increased load.

Secondly, this is presumably your Mercian with a quill stem. Quill stems are relatively expensive and potentially will require new bar tape to change. I experimented unsuccessfully with multiple different stems, but those were relatively cheap threadless stems with face plates which allowed easy changes. The problem with changing stems is that it doesn't fix the problem, so I just wasted more time and money trying different length and rise stems, and got increasingly frustrated as each one proved not to be the 'right one'.

What seat post do you currently have? If your current seat post has a typical 15mm-20mm set back and is a standard 27.2mm diameter, it is likely to be much easier, cheaper and quicker for you to try a seat post with more set back.

If you fitted a seat post with, say, 10mm more set back, it is very possible that you would then need a shorter stem, but I think that is an easier and less critical choice to make: you are not depending upon the stem to reduce weight on your hands. Having changed your saddle position to give you your 'balance point', your hands are not having to support any significant weight, so it's just a case of deciding for yourself what feels the right position for your hands to be. In my experience, it's possible to work out whether a 10mm, 20mm or 30mm shorter stem would be best by riding with hands on the hoods, and then pulling them back bit by bit towards you on the ramps, to see if that feels better and get an idea of what stem length would put the hoods in that position.
Last edited by slowster on 19 Sep 2021, 4:27pm, edited 1 time in total.
Top

Although this has little relation to Ti I am finding a refresher on saddle positioning very useful.
I just posted some queries in the technical bit and most have been answered here.
Top

Thanks for your comments.

Mercian has a Campag Victory seatpost that's been on the bike since I built it up in 1986. 73deg parallel 531c. 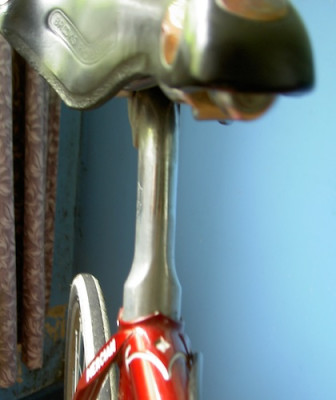 This is a photo from some years ago.

It is set back by dint of the design. 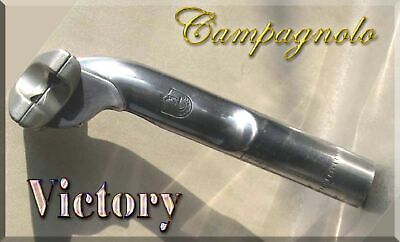 
When I modified the Moulton TSR, I set it up so the geometry of the saddle/BB/reach/height is exactly the same as Mercian. Even the dropped bars are the same width and drop.

The stem is a Cinelli 1R on Mercian. I have a longer one available too.

When riding this year - never happened until this year - my arms get tired and achey.
By holding the tops - and the straight section - the ache goes. This leads me to think of two issues ..........

1. My mileages are WAY down this year so I'm not as strong or cycle-fit as I used to be. I'm walking the dog maybe 10miles a week instead of cycling!

2. Despite the excellent advice from Colin, I still think that moving the bars closer would be better - for me at least - or even fitting straight bars.
Mick F. Cornwall
Top
Post Reply
89 posts