The Worst Bike Shop Review Ever

I wonder if they have a medieval rack out back...

probably a [backside]* in the air bike? with handle bars too low?

Graham wrote:
Follow Up
Eventually I tracked down a Rudelli Misura high-quality replacement, which is still on the bike 15 years later.

A Rudelli Misura headset. Roller bearings similar to the Stronglight except the rollers are arranged at approx 90 degrees to each other between the upper and lower races. The interesting feature here is the conical top locknut which is recessed into the upper adjustable race. This made for a very low stack height - an ideal replacement for the early Shimano 105 headsets which also had a very low stack height. In my spare parts bottom drawer. I suspect these are rarer than hens teeth as the company seems to have moved on from manufacturing bike parts. http://discover.mfg.com/en/suppliers/Me ... isciplines Tacascarow wrote:I'd far rather have an honest miserable old git than a sycophantic 'have a nice day' but that probably says more about me than them.

I'd rather have a friendly (old or young I don't really mind TBH)chap or chappess,who knows there stuff and doesn't give me a pile of guff to wade through before coming to the point

.
What I can't be doing with is someone who dosn't know what they're on about but tries to bluff it,they're easily taken care of with a bit of techno speak

We called in at Gylside cycles in Ambleside,Cumbria a couple of weeks back,a young lad approached and asked were we OK,no aires and graces just honesty and openness,with a touch of reverence when he found I knew what I was talking about,nice young chap with a good attitude,I liked him a lot.

I don't do miserable old gits very well,they may remind me too much of myself

To avoid the possibility of such an incident reoccurring I secured two headsets, before they went out of production. 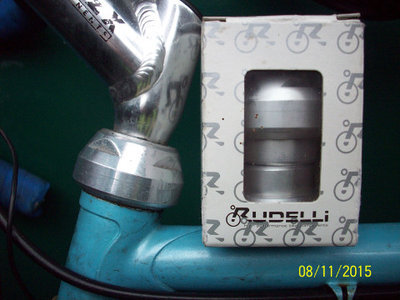 greyingbeard wrote:So go in, take the mick, its Kinetic in Hitchin.

I've always found them perfectly friendly. Don't buy much there, you're right about the high-end stuff and I've got enough bikes already, but I've always been made welcome. They did struggle to get me a few spokes a bit back, but they were trying

And they sell pretty good coffee as well.
Top

they should give customers the coffee at their prices

Perhaps while sourcing something as complex as spokes. They may not have every size in stock but they should know where to get them.
Top

This one, I think takes some beating!

'A man whom I assume is the owner has an entirely odd method of interacting with the public, condescending and rude, has mistaken the concept of needs analysis with interrogation and is further mistaken in believing that his knowledge of bicycles (whatever that may be) is as impressive and interesting to others as it is to himself, it is not. I visited with the intention of purchasing a vintage bike frame and was willing to pay a decent amount for the right item but within five minutes of having been interrogated, condescended to and subjected to a variety of sarcastic facial expressions one would expect from a child, I was already planning my exit strategy. At one point I actually asked, quite literally, if it would be possible for me to exchange money in return for goods or if there was some sort of special criteria or perhaps a test which needed to be passed first. If this little business is in some way tied in with charity or community then its quite sad that this individual is the face for that, very sad.'

Easy to find if you know how

Having time to kill while waiting for my wife at a meeting, I wandered around a town near the Cotswolds. Seeing a bike shop I went in a browsed his bikes and accessories. While I was looking at saddles (one of my favourite occupations) the owner came up to me and without a word from me started extolling the virtues of the Team Pro on display. I interrupted him saying I had one and couldn't get use to it. Now bearing in mind I had never been in the shop previously and was not in cycling gear he said; "that is because you saddle is not in the correct position, you should come in for a proper fitting". Maybe he should have asked a few questions first because how he jumped to that conclusion left me bemused as my bike fitting was done by George Longstaff.
There is your way. There is my way. But there is no "the way".
Top

greyingbeard wrote:Perhaps while sourcing something as complex as spokes. They may not have every size in stock but they should know where to get them.

Black spokes can be harder to source, and wires got crossed somewhere*. It happens. If I recall correctly, they gave me a discount because of the problem.

* Even before I started the wheel build

I really miss the old, dark, wooden drawers bike shop. Filled with stock that was sometimes older than the owner themselves. Stern and knowledgeable old gentleman are what these shops were staffed with, and heres one of my all time favourites, HR Morris: 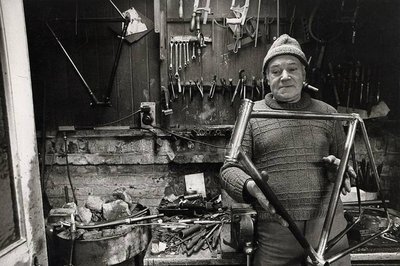 I decided I wanted to try a shorter stem on my Galaxy. Mechanic popped out, had a look, disappeared into the back, lots of clanking noise, came out with a part that was exactly right, and moreover was a perfect replica of the one fitted to the bike, just an inch shorter.

At the time it was run by the blind school and, of course, the mechanic was blind - he did a better job "looking" with his fingers than many fully-sighted mechanics can manage these days.

Ho hum, I rather think this thread has become a tad inverted ...
Brompton, Condor Heritage, creaky joints and thinning white (formerly grey) hair
""You know you're getting old when it's easier to ride a bike than to get on and off it" - quote from observant jogger !
Top

Does that make it a left-hand thread?
Top