> Not exactly Does anyone know but more a heads up on some good prices on Marathon Supremes
> The Supremes are highly thought of by many on this forum (me included) but others are put off by their high price I suspect
> However, Schwalbe now have a newer version of the Supreme - the HS 469 so you can find the previous version, the HS 382 at a good price (I've just taken delivery of two 700x32c for £20 each inc delivery from an eBay seller).
> I haven't done a great deal of research on the differences which may well be just sales hype anyway - the pic below shows a change in the tread pattern and there appears to be minor tech spec differences too, but for me the HS382 is a lovely tyre and I'm chuffed to have two new ones for the price 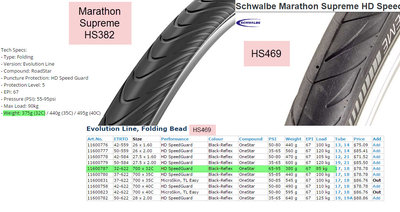 it might help to add an url to where to get them?
Top

Judging from the OP, this is the URL http://www.ebay.co.uk/itm/Schwalbe-Mara ... SwKfVXFjZb

8 left at time of posting
Top

Thanks for the heads up, just ordered a pair.
One of my favorite tyres, though often more than I'm prepared to spend. I do hope the new version is as good. Schwalbe do seem to have moved puncture protection up the priority list at the expense of other attributes, I'm thinking particularly of the standard Marathon, IME this isn’t needed with the Supreme.
Top

mercalia wrote:it might help to add an url to where to get them?

I deliberately chose NOT to list the seller I used as there are a good number of suppliers inside aBay and outside who are doing deals on the HS382 at the moment and there may be better offers around since my first posting.

8 left at time of posting

That's the one and now down to six!

The higher priced ones are most likely the hs469

How do these compare to the Vittoria Hypers so beloved of this forum?
Top

According to Bicycle Rolling Resistance, the Voyager Hyper rolls very slightly better than the Marathon Supreme (but they tested the new model, not the old one that is the subject of this thread).

However, the Marathon Supreme has better puncture protection (except on the sidewall). So you win some and lose some.

I have ridden a fair bit on Voyager Hypers and think they’re great tyres, but I have only briefly tested the Marathon Supreme on a friend’s bicycle at unknown pressures (and in a narrow, 28 mm version). By the way, it looks like the new Marathon Supreme is no longer made in 28 mm. I wonder why Schwalbe dropped that size.
Top

Thanks for the heads up on these Supreme deals - just bought a couple and the price seems pretty good. For anyone needing 26 inch tyres Planet X are doing a liquidation sale with 55% off at the checkout which seems to bring the price for two tyres down to about £27 - or at least it did on my checkout until I realised I don't want 26 inch tyres. It's here...

Are these reductions on the new 2016 supremes or are they selling off old stock. I recall reading the 2016 supremes are better in terms of rolling resistance?
Top

geocycle wrote:Are these reductions on the new 2016 supremes or are they selling off old stock. I recall reading the 2016 supremes are better in terms of rolling resistance?

The reductions are on the HS382 which if my understanding is correct, is the 'older' version with the hs469 being the newer (and presumably) 2016 version.

And it looks like the ebay seller has replenished stock

I was almost (repeat, almost!) sorry to see the Supremes at such a good price as I was going to give the much vaunted Vittoria Hypers a go as I think they are very similar tyres but the current price of the hypers in the size I would want, was not up to the Supreme's price (and better the devil you know etc

).
Without my stoker, every trip would only be half a journey
Top
Post Reply
10 posts • Page 1 of 1