by Milfred Cubicle
After years of trying to find the time, I'm booked up for a ride of this big beast. Has anyone any experience of the best way round to approach the pass? Most reports seem to describe tackling it east-west, finishing in Applecross. I'm wondering if it is an equal challenge in the opposite direction, keeping to the coast from Torridon, then over the pass from the west? Either way the height gain has to be the same, but some climbs are just 'better' ridden a particular way. Any experiences? Thanks.

by bikepacker
Both sides are tough but I think doing it East to West is the slightly tougher climb, my picture shows the start of the climb that way. On the other hand going around to start the climb in Applecross you have a very tough up and down road from Shieldaig to contend with before you start the main climb. 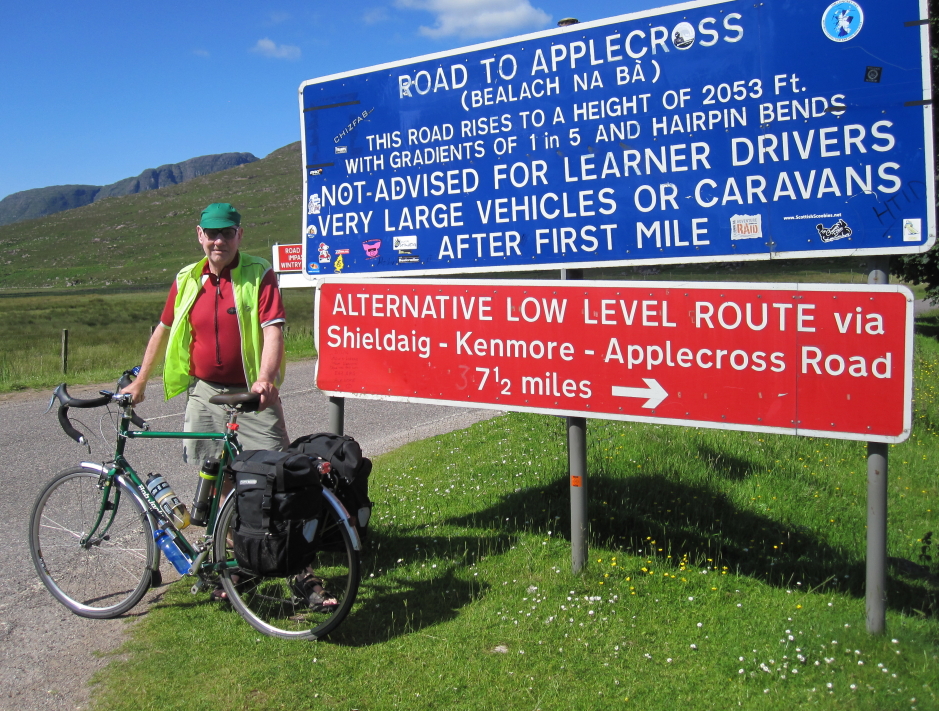 by gloomyandy
I did it from east to west earlier this year and it is certainly hard work. It's nice to have the option of a stop in Applecross after the climb before tackling the coast road. I cycled from Lochcarron to Shieldaig (camping at both) and the ups and downs of the road to Shieldaig seemed at times harder than the climb over the pass! Interesting to see how the sign has changed! Looks like it has had a lot of visitors:

Couple of shots of the climb:

This was part of a fantastic trip over 8 days through the Outer Hebrides and up the West coast:

by Milfred Cubicle
Thanks for the responses....especially regarding the contour of the road from Shieldag. These small coastal roads are either as flat as the shore, or as you say, quite lumpy.
I'm starting out from Torridon hostel, and ending the day in Ratagan. Via Shieldag seemed the obvious route, but now I'm thinking, climb the pass, cup of tea in Applecross, then back over it again. Hmmm.

by gloomyandy
The coastal road is very nice (but it does go up and down a fair bit!). Torridon to Ratagan is a fair trip, the road from Lochcarron is also pretty lumpy, so could be a big day. Probably depends how much you are carrying (I had camping stuff and food), and how fit you are! The climb is definitely well worth doing though, it was one of the highlights of my trip. It had been a long term aim of mine to cycle it (I've driven it a few times), especially on my touring bike. On the day I did it I saw a fair number of folks doing it just as a day ride from Shieldag.

by Milfred Cubicle
Yep, whichever way I do it, I'm in for a long, tough day. Upwards of 80 miles at least. Thankfully I will be going light with only overnight things. Looking at it, it may be wise to fit the triple before I go.

by gloomyandy
if it's any help I had a 26x36 (26 chain ring 36 rear cog) lowest gear. With 35c tyres on a 700c rim (which I think is 19.6 inches), and was able to ride all the way up with a pretty loaded bike. This included being able to stop (and get going again) a couple of times to let cars past and take pictures. I saw a couple of folks with what looked like 34x28 gearing on road bikes that ended up walking. I think part of the problem was that in places it is very narrow (and steep!) and you will almost certainly have to stop to let a car pass, so whatever gearing (and shoes/clips) make sure that you can get going again in them! Having SPD style pedals probably made this easier then it would be with KEO or whatever.

by andrew_s
I'd recommend westbound - Tornapress to Applecross, then round the coast to Shieldaig.
a) the only lunch stop is Applecross, and a pint or two after the climb would be better than just before.
b) the coast road is more scenic that way, as you are on the coast side of the road, and the sun is mostly on your back rather than in your face.

When I did it, it was as a loop from Torridon YH, then on to Ratagan the next day (via the Skye bridge, Kylerhea ferry and Bealach Ratagain)

by LollyKat
I did it last year east to west, on a loaded bike. It was very windy - I thought the mountain might provide some shelter but as got higher I came round a corner and was stopped dead in my tracks. I ended up having to walk quite a bit as the weather grew appalling -- wind, heavy rain and finally mist so thick that I even had to walk the first couple of hundred yards at the start of the downhill, as I could only see a few yards ahead. Great fun, though! A driver with empty bike racks on his Landrover stopped and offered me a lift to the top but I assured him I was really enjoying myself.

Descending to Applecross I didn't need my brakes very much - it is not as steep on that side and sitting up against the headwind kept my speed down.

by gloomyandy
If you do go east to west and descend to Applecross watch out for a rather nasty off camber left hand bend on the way down, almost caught me out and from talking to others later I am not the only one!

by SpannerGeek
A friend did it on a 36 x 18 fixed wheel! With bags

Excellent ride.
I had two issues. One, it's a long way up! and two, on the descent the other side there was a very slow car in front and I had to brake too much so was worried about the rims overheating. I stopped for a while to let the car get further down so I could freewheel better and save my brakes for the corners. 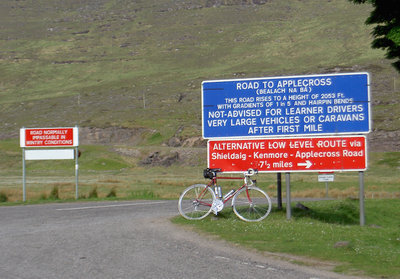 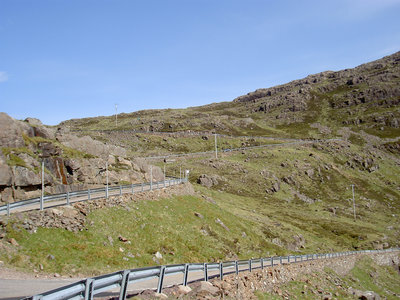 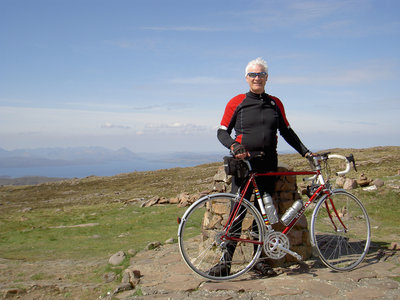 by Milfred Cubicle
Thanks for the replies folks. Gearing wise, I'll be on at least 28x36, and may even fit a smaller (24) granny ring, so should be o.k. I'll just be carrying two small Ortlieb planners, so not too heavy.
The object is to crack the climb, and east-west seems like the best option. I think I'll ride in from Shieldag to Tornapress, up to the summit, then back down the same way to Ratagan. I would prefer to ride the more 'interesting' climb anyway, and doing summit and back gives me a chance to take pictures of what I've just ridden.

by hercule
I've done it a few times. The last was on the Bealach Beag sportive which starts in Sheildaig and does an east west climb from Tornapress. Having not ridden the coast road back, I thought the "main attraction" would be the Bealach itself, then a speedy flat and wind assisted trip back. It was not to be! The climb was actually the easy bit and I enjoyed twiddling past the stranded carbon fibre roadies who were having to walk due to macho gearing. Unfortunately I had been a bit too enthusiastic on the climb, and after the descent to Applecross discovered I had a mighty headwind to contend with back to Sheildaig. Then there were the dips and climbs in the last few miles to Sheildaig - cumulatively far worse than the main climb of the day. But normally with the usual prevailing wind the coastal bit should be wind assisted.

There were some sketchy bits on the descent with extremely sharp corners with gravelly bends. With age and maturity I'd be a bit more circumspect on the descent than I was then. There were a couple of riders who had to be ambulanced off the course after leaving the road at speed on the way down.

by Arturo
After a fabulous B&B at Applecross Post Office (watching HMS Astute avoiding sandbanks out of the bedroom window...) we departed into the teeth of a gale during a tour in April. After being blown off the road near the top, we were reduced to pushing the bikes (leaning at 45 degrees) for about two miles over the crest. Once below the summit the descent was OK, and the tearoom at the T junction at the bottom was very welcome after a 3 hour marathon. Fortunately there was little traffic so the single track was manageable. It may well be worse in summer, especially as the Tourist Board are promoting this as a car !!! route on their North Coast 500 publicity.
All times are UTC
Page 1 of 2
Powered by phpBB® Forum Software © phpBB Limited
https://www.phpbb.com/