What constitutes a beautiful bike?

She does not seem to appreciate art

reohn2 wrote:You mix up form with function.
Life is a compromise otherwise everything would be just so,mudguards keep me dry,warm and clean

No doubt, I just don't fancy the mud clearance on those to be very good - from what I can see in the photo anyway. I suppose it's down the local conditions where and when you ride, but this time of year where I am, they wouldn't last too long.

reohn2 wrote:Now what of the norm of full suspension MTB bikes?

reohn2 wrote:BTW I've even had someone on here complain of that bike having "clown" tyres fitted

I wanted to sit very upright on the bike; the back was quite bad at the time. So, on that count it worked well. The down side to being bolt upright is the wind. Talk about complete opposites, bolt upright on the Longstaff, laying back on the recumbent. As you can guess windy days were the recumbent days. As for it with panniers, it was solid, No movement from side to side, as on the Bob Jackson. And that is not a criticism of the Jackson. The dismounting, yes that worked well. I used to ride with the Rough Stuff Fellowship, so getting off was essential, slippery ground and Marathon tyres was not always a good combination. One downside for some, would be the short wheelbase; it would be a bit twitchy for some. It never bothered me, again riding recumbents you get used to it. But all in all it did what I had set out to achieve.
Top

Back in the 50's 60's and 70's they made some beautiful elegant steel bikes. Slim tubes, swept forks, decorated complex profiled lugs. No ugly welds, no aggressive appearance, no chavy looking decals. Just simple straightforward elegance. My old Mercian has it in spades... 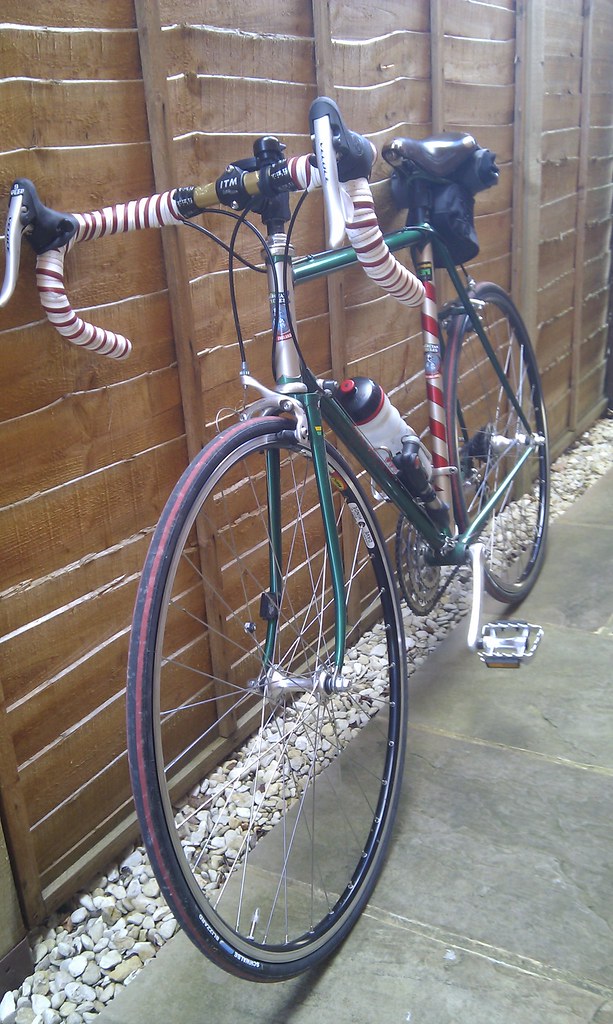 A lot of today's cars, particularly SUVs are made to look 'get outta my way' aggressive, some like the little Fiats are made to look cute for the ladies who love em. Its all in the hands of the designers. Those old bikes, the Raleighs, Claud Butlers. Mercians etc were just beauties.

tinyworld wrote:As I said, my pictured Longstaff is not a conventional bike, that was one of the questions that I was trying to get to though, does it have to be conventional to be beautiful? I know beauty is in the eye of the beholder. All the ugly comments that I have got have been on the Longstaff, the Moulton or the Recumbent. The Bob Jackson tourer, black with double box lining, and the Planet X, both get the comments beautiful.

A lot of the posts have addressed the question of which accessories (and combinations thereof) create beauty. A lot have addressed the form versus function debate. It's also been pointed out that one's sense of beauty is attached to the type of bike one likes anyway. And it seems to be accepted that beauty is in the eye of the beholder anyway. But the nub of tinyworld's question is "does it have to be conventional to be beautiful"

Sadly, I fear that the answer is "yes" for the majority of people. I say "sadly" because this happens a lot outside in the real world (beyond cycling). Convention is powerful. It's restrictive. You don't have to look much further than the images in the magazines to understand their relationship to low self esteem in young men and women. Also think of how much marketing (and sales) depend on the "conventional" aspirations that are created for us as consumers.

My answer is "No", tinyworld. I'm not saying that an unconventional bike is automatically beautiful. Beauty is in the eye of the beholder, for whatever reasons the beholder might have. But many (the majority?) people can't resist the pressure of the "conventional" - if it's unconventional, give it a wide berth!!
Top

Blimey, I had "remembered" it a completely different colour.....the memory is fading faster than the eyesight!
Bike fitting D.I.Y. .....http://wheel-easy.org.uk/wp-content/uploads/bike-set-up-2017a.pdf
Tracks in the Dales etc...http://www.flickr.com/photos/52358536@N06/collections/
Top

Threevok wrote:
No doubt, I just don't fancy the mud clearance on those to be very good - from what I can see in the photo anyway. I suppose it's down the local conditions where and when you ride, but this time of year where I am, they wouldn't last too long.

You could be right,I've never had a problem with them

TBH I've no problem with either,they are what they are for what they do

I love it,a sort of tractor of a bike 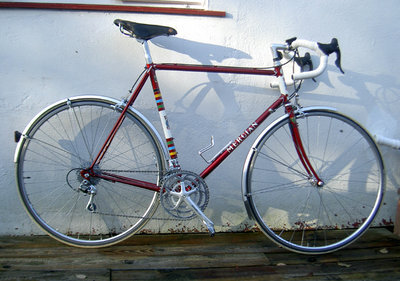 a beautiful ride
“In some ways, it is easier to be a dissident, for then one is without responsibility.”
― Nelson Mandela, Long Walk to Freedom
Top

You can't hide behind a respray, you know!

what an ugly bike. what was the designer thinking? was it a special purpose bike for some one?
Top

And drop bars, mudguards, rack, and leather saddle.
Brompton, Condor Heritage, creaky joints and thinning white (formerly grey) hair
""You know you're getting old when it's easier to ride a bike than to get on and off it" - quote from observant jogger !
Top

I consider this to be the prettiest of my bike/trikes , rubbish photo notwithstanding.
George Longstaff tourer , 531, lugged etc

Elegant & in my opinion quite beautiful. Not absolutely perfect but getting there.

Not mine by the way, photo is cropped from another forum, 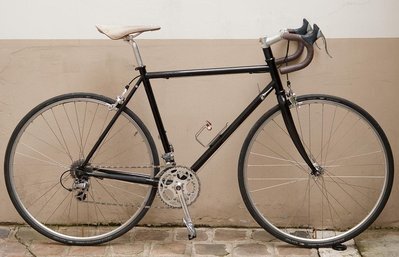 Brucey wrote
apologies if this sounds pedantic, but that is not 'a diamond frame' in the usual sense; that frame design is known as a 'cross-frame' and is as old as the hills;

I seem to remember that it was a London cross frame. But my mind may be playing tricks. I can find no references to it. In my searching I notice that there is a Dutch cargo bike of this design. If you put a Moulton at the side of it, they look similar. OK a squashed version, or the Pedersen, so it’s not a unique design by any means. In fact I took my Moulton to George Longstaff when we were going through the dimensions of the Longstaff. George remarked that it looked a bit like a Moulton.
As for the stiff frame yes it is. Hence the sprung saddle
Top

Mercian do some amazing paint jobs, and that's one of them. Mine was so good that my Dawes is currently there, getting the same paint job but reversed (blue and red instead of red and blue).
Top
Post Reply
122 posts