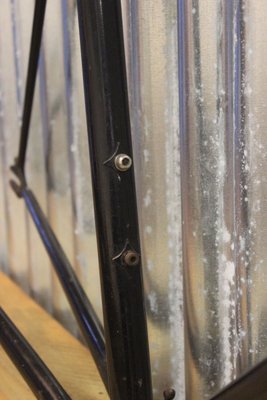 I have just bought this unusual frame, it is a road path frame, comes with mudguard eyes, plus canti break fittings front and rear. It is fitted with Nervax Pro lugs, which makes me think it is from one of the better known frame builders, but no transfers present. One thing that does look a little different is the bottle cage fittings shown in the photo. Does anybody recognise these fittings or might be able to offer any insight to the builder???
Top

At a guess I would suggest that bottle cage eyes on the seat tube came in in the mid eighties or so and may well have been added later if the frame was built as a road track.
Top

They are a part perhaps used by several frame builders? Is there a frame number, which will likely give some leads via a person more knowledgeable than I ?
Top

Definitely a standard boss reinforcing plate. FWIW frames were available with double cage bosses from the mid seventies my '78 Blower had a double set from new.

What pattern are the lugs - shape / style will possibly give a hint as to age at least although it's quite possible that that frame number has a clue frame 70 of (19)78? It's a numbering system popular with many smaller builders.
Convention? what's that then?
Airnimal Chameleon touring, Orbit Pro hack, Orbit Photon audax, Focus Mares AX tour, Peugeot Carbon sportive, Owen Blower vintage race - all running Tulio's finest!
Top

I am more interested in the rear dropouts. They resemble modern day BMX dropouts.
I wish it were as easy as riding a bike
Top

Presumably, it was built for somebody who rode fixed - hence the track ends - but over some distance - hence the need for two bottles. Although he didn't ride fixed in time trials, there are pics of Jacques Anquetil using MAFAC Criterium brakes to save weight, but the rear canti fittings might not be the norm for a fixed rider. AFAIK, touring on fixed continued in Scotland for some time after it had become unfashionable in England. Yiou don't need to go too far back to a time when many riders had one bike with several uses. That would explain mudguards.
Top

I think it has been a multi functional frame, hence the set up, I intend to keep all the features when I get it resprayed, and the canti brakes will be a bonus as I will be able to use 700 wheels. Just need to try and find out who built it so I can get it badged up properly. There appears to be 3 things under the down tube, spread at intervals along the tube but I have no idea what these are, does anybody recognise them??? Hopefully the additional pictures will help 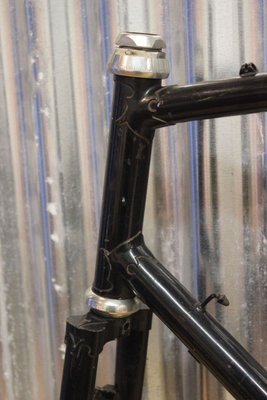 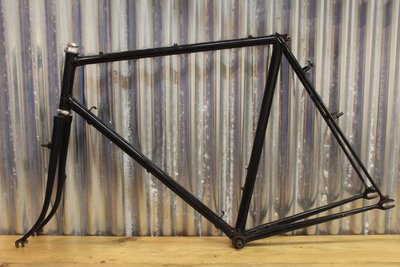 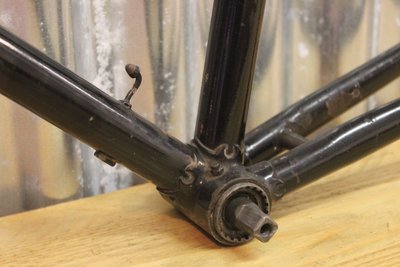 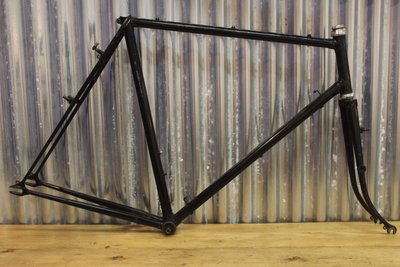 Having seen the whole frame I'd go for somebody who toured on fixed. I think the boss for the front lamp dates it. IIRC, the last (N)Ever Ready lamp to fit would have been the Frontguard in the early eighties. That retained the general shape of the traditional bike lamp but took 2 D cells instead of the battery made specifically for front lamps. There'll be somebody with a better memory than mine but I think lamp bosses were going out of fashion by the late 70's and stopped being almost universal before that.
Top

The lamp boss certainly identifies it as a tourer: my '83 Mistral was the only tourer in the Holdsworth catalogue and the only model fitted with a lamp boss.
I used (and still have) the inappropriately named Wonderlights on mine, and the front was supplied with a bracket to fit that fork boss.
Top

The top most nobble under the downtube looks like an antislip thing for bolt on friction gear levers which could, over time be pulled down the tube. The nobble was supposed to be under the bracket to stop this migration,
Convention? what's that then?
Airnimal Chameleon touring, Orbit Pro hack, Orbit Photon audax, Focus Mares AX tour, Peugeot Carbon sportive, Owen Blower vintage race - all running Tulio's finest!
Top

If the frame was originally built with track ends, I'd not expect provision for gear levers.

canti brakes will be a bonus as I will be able to use 700 wheels.

I'm not sure that it's as straightforward as that. If gaz (or any other expert searcher) can dig out CJ's tech notes as published in the CTC mag and later archived, IIRC there were several queries from people who had problems. I had to persist with 27" wheels through this very issue. More recent brakes may have more adjustment.
Top

foxyrider wrote:The top most nobble under the downtube looks like an antislip thing for bolt on friction gear levers which could, over time be pulled down the tube. The nobble was supposed to be under the bracket to stop this migration,

Thinking further, I know somebody who in the early 70s had a frame built to use an Osgear. Would these nobbles account for that?
Top

Roadster wrote:The lamp boss certainly identifies it as a tourer

When I had my Mercian Vincitore frame built in 1986, I specified a lamp boss. No way was I a tourer, but a commuter!

I had bottle bosses too. Nowt to do with touring, but riding to work and back.

I had a variety of lamps on that boss. Started with a plastic Ever Ready and NiCads with a Xenon bulb, then later fitted a halogen front lamp powered by a Soubitez BB dynamo. Excellent bit of kit!

When I had the frame refurbished for its 21st birthday, I got them to take the lamp boss off ............... as I wasn't a commuter then, but retired.
I sold the dynamo system on here.
Mick F. Cornwall
Top
Post Reply
35 posts