Hi all
I am off to France soon for a fixed base touring holiday. I'm trying to avoid the hassle and expense of taking my own bike. The only available rental is a Kona Dewy with Discs. I have never ridden a hybrid any distance and wonder if I will adapt comfort and speed wise. I normally use my Dawes Galaxy. So I'm wondering if anybody has done something similar and how was it? I'll only be doing about 50mile days with coffee and lunch stops, but the upright position may be a shock to my body and ass. I'm also wondering about taking my Brooks and SPDs to even things up.
Thanks. Jim.
https://www.facebook.com/North-Manchest ... _todo_tour
Top

My tandem has flat bars, admittedly with bar ends. I spend most of my time on a drop barred solo. I've never found it an issue. Lots of continental cycle tourists use flat barred bikes. They are not having a problem. Just remember to shuffle your hands around sooner rather than later.
Supporter of the A10 corridor cycling campaign serving Royston to Cambridge http://a10corridorcycle.com. Never knew gardening secateurs were an essential part of the on bike tool kit until I took up campaigning.....
Top

I normally ride drop bars but did a 2 week tour of Cuba on a hired mountain bike. A bit strange at first but you soon adapt and after a day it seems normal.
A cart horse trapped in the body of a man.
http://www.jogler2009.blogspot.com
Top

Taking pedals and saddle doesn't seem entirely daft, but what would the hire company think (other than "we'll get this one back better than it leaves is"
A shortcut has to be a challenge, otherwise it would just be the way. No situation is so dire that panic cannot make it worse.
There are two kinds of people in this world: those can extrapolate from incomplete data.
Top

I'd probably take pedals and saddle. The hire company don't need to know about it, do they?

The brakes may be the other way round to what you are used to, ie front on the left lever.
This could catch you out when you're concentrating on the road etc 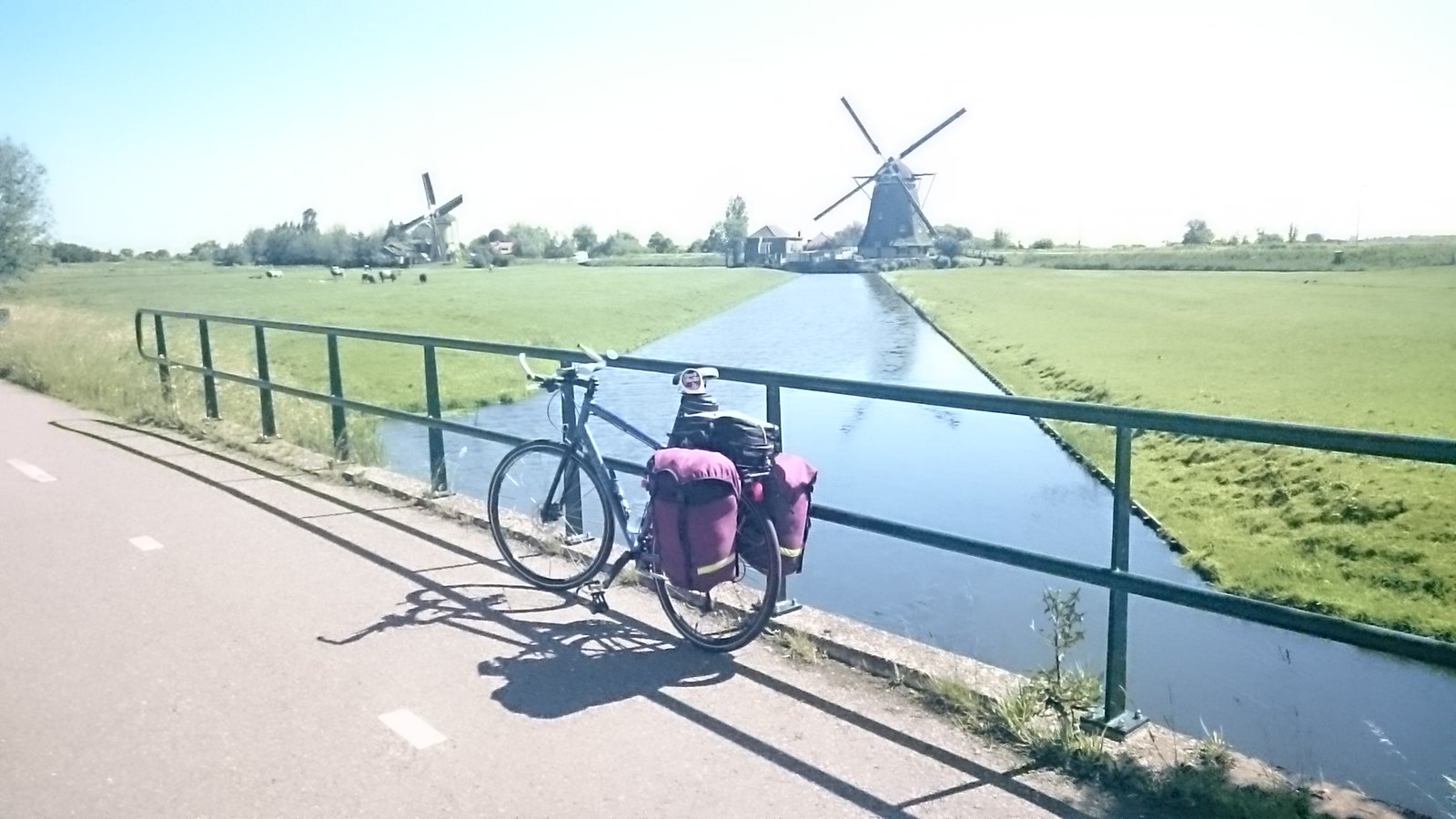 This is on my way from Roscoff to Amsterdam last year. The bike is a Kona Dew Deluxe. Tips for you:

- I've got fat slicks on it, running at 85psi. Low rolling resistance but good shock absorption - the bike paths could be moderately bumpy.

- I've got flared handlebar grips. These are invaluable - without them, my hands become numb because the straight steel forks hammer you.

- I'm using an ISM Sport noseless saddle. I've been using it for several years. I had to do a slight modification to allow it to angle down further to prevent it from stabbing me in the back of my legs, but now saddle comfort is just not something I need to think about.

- I had to use longer bolts and washers to make sure the pannier rack cleared the rear discs.

- When I first bought it, I had significant toe overlap with the front wheel. I sorted this by buying shorter toe clips. (I don't use clipless as I cycle in my normal clothes/footwear.)

- I was doing quite high mileage for a massively overloaded bike - over 100 miles on some days. In Flanders/Belgium/Holland, that's fairly easy, but you could end up with sore wrists, so moving from one hand position to another was a godsend. A set of cheapo bar ends were all I needed.

I couldn't fault the bike - it just worked well without complaining, and I didn't experience any discomfort. I think it's quite quick for what it is - I think the use of discs has allowed them to use lighter rims, which makes a big different in the effort you have to put in to accelerate. The brakes are fantastic. Other than replacing the pads, I've never touched them in 10 years of ownership, yet they still work as new. (I know, I know - a full brake overhaul is at the top of my list of things to do.) I'd have no qualms about using one on any tour - one of the main advantages of this bike is that it's relatively cheap, which reduces the likelihood/trauma of theft.
Top

Assuming the bike will be okay for the job and you can get a good position on it, just make a point of enjoying the differences. It's an opportunity to learn what a different style of bike feels like. It will be not so good at some things and better at others. But it will be different.
Top

I spend much of my week swapping between bikes, Time trial, road, MTB, tandem (well less often), and to a bike I keep in Mallorca.
Take measurements of your current set up, ie saddle rail height to ground and to pedal, saddle nose to handlebar and get bike set up as close to this. We always take own pedals and saddles for the hire bikes in Mallorca (except mine which i now own), indeed it is expected that you take your own pedals.
Might feel a bit odd on the first day but your body and perception soon adapts to the bike.
I stand and rejoice everytime I see a woman ride by on a wheel the picture of free, untrammeled womanhood. HG Wells
Top

seph wrote:The brakes may be the other way round to what you are used to, ie front on the left lever.
This could catch you out when you're concentrating on the road etc

Yes I sometimes get caught out on hire bikes in Mallorca. Might be fun to try a different style of riding. May add to the holiday. I always change saddles and pedals on hire bikes if needed. The only problem is I end up borrowing tools as it is impossible trying to bring anything tool shaped through security in hand luggage. I've even been stopped and had my Brooks saddle queried in Palma.
Thanks for all the feedback. Appreciated.
https://www.facebook.com/North-Manchest ... _todo_tour
Top

This?....http://www.konaworld.com/dewey.cfm
My main problem would be the steep seat tube angle; this brings the saddle forward and throws your weight onto your hands, leading to numb hands, sore wrists, etc. The short rails that Brooks saddles are famous for will compound this, so you might be more comfortable on an unfamiliar plastic saddle pushed well back than on your familiar Brooks; on a fixed centre holiday it would be worth buying an allen key so you could swap saddles.
Flat bars and a short stem will make the riding position very short for somebody used to drops, although it might help a bit to keep weight off your hands.
Having said all that I have just done a similar holiday on a "borrowed" hybrid. Relatively short days meant no real problem, although I mostly rode with the heel of my hands just resting on the bars, or "puppy paws" for a change. Sitting upright with no SPDs I found I couldn't attack the hills at all, it was a case of change down and grind....which is fine on a hot day. Hydraulic discs on the "wrong" hand made me use both together, carefully!
Bike fitting D.I.Y. .....http://wheel-easy.org.uk/wp-content/uploads/bike-set-up-2017a.pdf
Tracks in the Dales etc...http://www.flickr.com/photos/52358536@N06/collections/
Top

Just a quick update now I am back from my holiday.
The Hybrid bike worked out fine. It was very comfortabel to ride, dare I say more comfortable than any any of my present stable. It kept up fine with the other riders on sportier machines and often sped away from them with no problems. It was the heaviest bike of them all but I can't say I noticed it on the move. I might even have been a little converted to Hybrids. makes one wonder how it would have performed with carbon forks and lighter wheels and tyres and a more modern chainset.
Delivered to the hotel door and taken away at the end of the holiday. Stressfree. My companions were not so lucky. Much packing and sweating. Chaos at the check-in and called back again later to let their tyres down and having to tear their bags to do so. Nothing I could do but sit and sip my coffee in the lounge area. 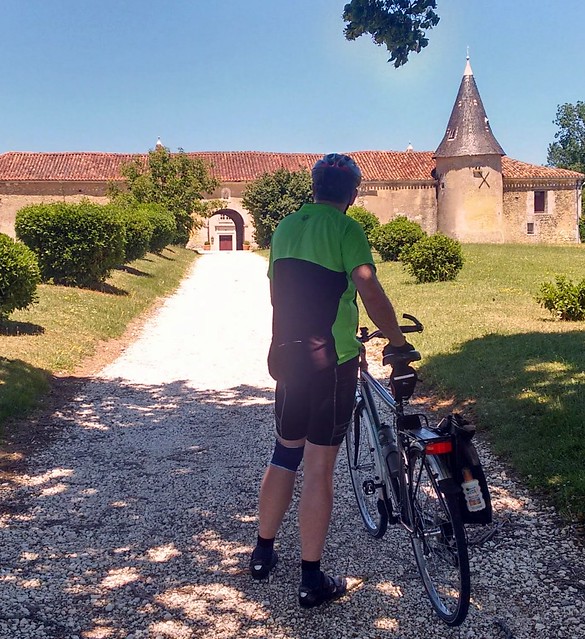