I am hoping that this is the right place to ask for some advice.

I have two Claud Butler Majestics that my wife and I bought new in the late 1970’s. They have been languishing in a shed for many years and it is now time for them to go.

They are completely original with Reynolds 531 frames and forks and Brooks leather saddles. The frames have stickers stating ‘Handcrafted by Holdsworthy’. One frame is 24.5”, the other is 21.5”. Unfortunately the paint work on the frames is not good.

I have trawled the web but the only bikes I have found for sale have been pristine. I don’t want to take ours to the tip as I feel they should be of interest to somebody.

Is there a market for bikes like this? If so how much are they worth? Getting a ball park figure would be great as I haven’t a clue. I tried to upload some pictures but failed.

Any advice will be much appreciated.
Top

are they like this? [the majestic model was launched in 1977 and with small variations carried on for a few years in the form you see it below (which is the 1982 model). Later they changed the colour and the specification somewhat.] 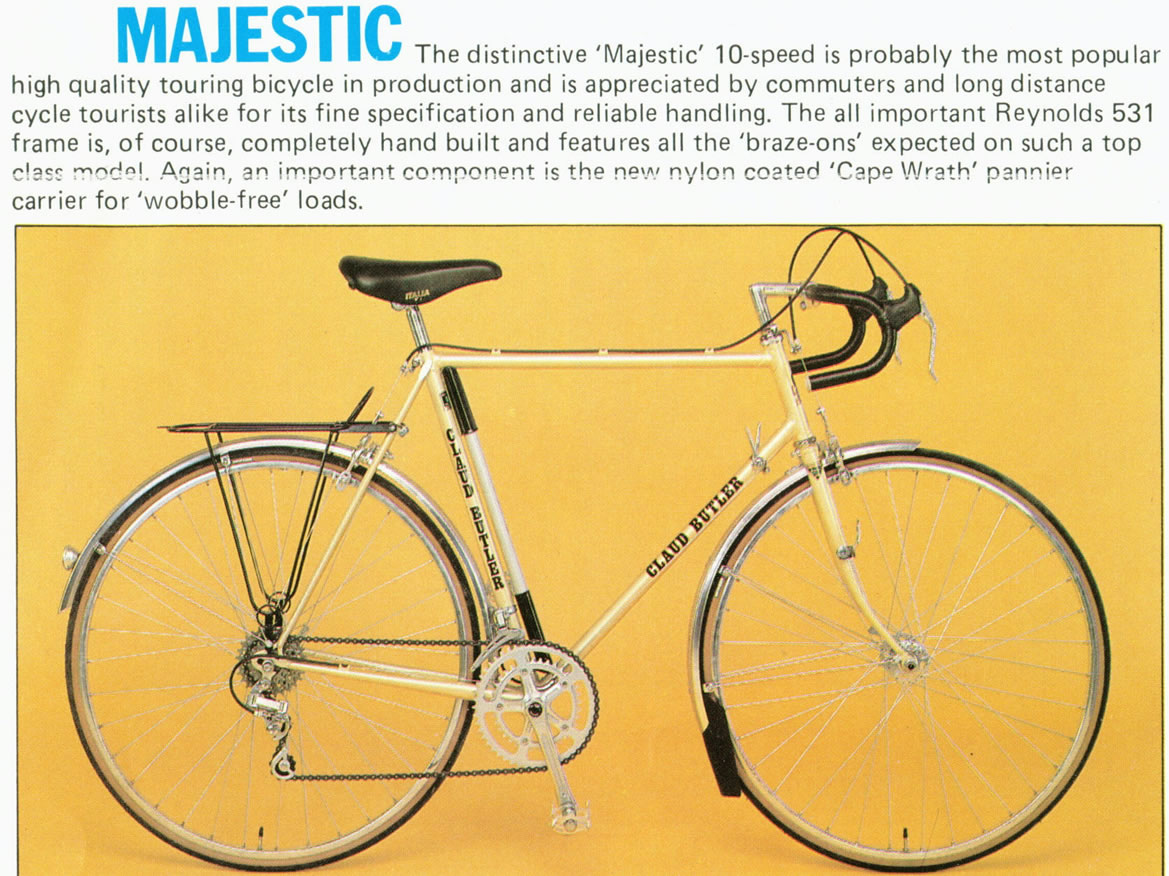 If so they were a perfectly competent bike in their day, but that was quite a long time ago now. The frameset is nice, but IIRC that model has 531 PG main tubes and forks not 531DB or 531 throughout. The parts were OK in their day but things have moved on and several decades of neglect won't have improved them. If the saddles have not rotted (which is fairly unlikely TBH, if they have been in a shed that made the paint go bad) then they can be sold separately. Various issues vs more modern tackle are that

- the bikes use 27" wheels, for which there is a limited selection of tyres available now
- the bikes use screw-on freewheels, ditto
- the rear hub axle is liable to break; it is nowhere near as strong as modern designs
- despite what it says in the blurb above, the carrier is rather wobbly once loaded up
- the bearings don't have any seals on them
- the chainset is of a sort that you cannot buy chainrings for any more; once they are worn out a new chainset is required
- the brakes may not quite reach to modern 700C wheels.

none of these things are show stoppers for sure, but they all add up and once you factor in a respray, new tyres, tubes, bar tape, cables, chain, sprockets (all of which are likely to need replacing) then you can see that you are doing for love not money even if the bikes are a gift. I had a bike of this sort a few years go and in good working order I think I sold it for £110. I'd ask a bit more now, but not a huge amount more. You can check current prices on ebay and gumtree.

This one https://www.lfgss.com/conversations/250715/ had an asking price of £140, four years ago, and it was almost immaculate.

Some suggestions; post some photos on here (they need to be small file sizes ~200kb if attachments; I use 'faststone photo resizer'). You can advertise the bikes for sale here in the relevant forum. Someone local to you may want them. There are also bike recycling charities that will take them; whilst it isn't econmically attractive to fix bike like this up, (and they are not quite old/prestigious enough to be really sought after classics) it'd be a real shame if they went for scrap.

Yes there is a market for them
May we see some pictures?
Entertainer, kidult, curmudgeon
Cycling-of course, but it is far better on a Gillott
We love safety cameras, we love life "597"
Top

They look like the one in the picture from Brucey except for the colour. Ours are blue.

I will get some pictures posted as soon as I can now that I know that I have to resize them.
Top

Don't fret about axles breaking because they rarely do.
Don't worry about a 'wobbly' rack' because it's not that big a deal unless you're doing expedition touring and that rack isn't designed for that anyway
Don't worry about tyre options there are still plenty of modern brand new tyres made and a fair few new old stock options out there. These bikes are easy to modify to accept 700C wheels, a set of longer drop centre [ull calipers and some new brake blocks will do the job, this wouldn't cost any prospective buyer wanting to do this very much, personally I wouldn't bother swapping to 700C, there's nowt wrong with 27".
Don't worry about the chainrings, there's always someone selling so called obsolete rings, unless they are a premium model then they won't be silly money to replace.

Your view on condition of paintwork differs to everyone else, not so good to one person could be perfectly acceptable to another, unless the frames are corroded/showing signs of rust don't worry, bikes of that age with a good description and plenty of photos will find their level.

IF the bikes are in reasonably good working order and just need a quick service and aren't rusted (just patina of the paintwork) then you could see £120 on an auction site, possibly more but then you need to account for fees, this might not be an option for you in any case as it can be a load of hassle. On places like gumtree or local selling sites £130 would not be out particularly if you take into account someone will want to knock you down a bit.
Ignore LFGSS prices, that site is completely different where it is a buyers market, prices are very much well below the norm.
good luck selling.
Top

Plus One for opinion forming, different views of the same Facts

I have an even older machine, I ride it on 1. January every year, 59" fixed, will not cost much more, has lots of memories

Cycling? Of course, but it is far better on a Gillott

Without seeing some actual pictures giving an idea of value is hard but somewhere between £60 - 175 each depending upon condition and specification .
There is a market for older retro bike's although it's not as strong as it was say 3 years ago
Where in the country are the bikes located ?
Top

I'm an IT dummy and after trying various ways, I've found MS Paint to be the best way to resize pics. Although it's not obvious, it's still bundled with Windows 10. Just open your image in Paint, then click on "resize" I just use trial and error till an image will load. To load an image, click on "attachments" at the bottom of the forum POST A REPLY screen. If this is unintelligible ask again.

You didn't ask about modernising or refurbishing these bikes but IME as somebody who tried to keep a bike of that era on the road, Brucey is correct. There were loads of developments which started not long after these bikes were built.
Top

FWIW the 'faststone resizer' works as slick as anything; it allows batch processing, so you can take whole folder of photos and convert them all in one operation.

Mine was blue, and was a slightly older version than the one in the photograph. It didn't have the lamp bracket fork braze on, nor the rack bosses on the seat stays.

As Brucey says, it was only 531 main tubes and forks. Mine had a 3 point fixing rear rack, which oscillated unnervingly when I used panniers.

The hubs were 'Sanshin' and although I cannot remember the brand, the rims were marketed as being resistant to staining or similar, and my experience was that they did indeed shine up very easily with a quick clean, and it would not surprise me if yours did so even now, although that is not necessarily an indication of the current condition of the wheels.

There was a lot of rust under the band on down tube levers when I dismantled my bike, but that may not be an issue if yours have been kept out of the rain all this time.

The original Weinmann brake hoods on mine were brown/tan, and looked like the soft rubber hoods on more expensive brakes. In reality they were an unpleasantly hard plastic compound, which I soon replaced with some proper rubber Weinmann hoods. Even if still intact, if the original hard compound hoods are on your bikes I suspect that they would rapidly break up if someone started to ride the bikes regularly. I don't know if it's still possible to buy Weinmann pattern rubber hoods cheaply.

In general the parts on the bike were low end, e.g. an old fashioned seatpost with separate clamp. I made a few upgrades to my bike, e.g. Suntour Powershift ratchet levers to replace the original friction downtube levers and a micro-adjust seatpost, but it was not a particularly good bike of its type, and mine ended its days on a turbo trainer.
Top

You might get an offer or two if you post pix, but they're sadly not worth very much. Perhaps someone in your family might be interested in them for their sentimental value? Whatever you do, don't make the expensive mistake of doing them up with modern components or trying to restore them with period bits and bobs as you will struggle to recoup your investment.
Top

the 1977 CB catalogue is available online

and the original ('sky blue flamboyant) version of the Majestic is on p8, as described above with a three point rack and no lamp boss.

If yours had the 'flamboyant' paint, it normally comprises of a silver base coat with a blue-tinted translucent lacquer over the top. When paint like this ages, it isn't unusual for the blue lacquer to deteriorate and to start coming off wholesale. The result looks pretty terrible, even if rust hasn't set in yet.

Brucey, thank you for posting the link to the catalogue. I had never heard of that website before. I've just found on it something for which I have been hunting for while: a photograph, albeit in black and white, of the limited edition Claud Butler Cape Wrath tourer (not identified as such, but I recognised the marketing photograph straight away, even after all those years). It's on the first page of this Holdsworth catalogue from 1981:

It had Campagnolo gears and brakes, and was my heart's desire at the time. If the OP had an unused one of those in his shed in my size, I would be beating his door down with my cheque book.
Top

Finally managed to shrink some photos and attach them. Having read the other replies I think my description of the paint work as ‘not good’ should probably be ‘pretty bad’. Over the weekend I will post some more photos. 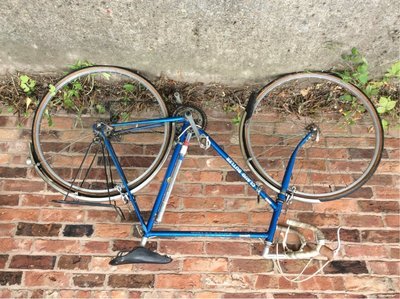 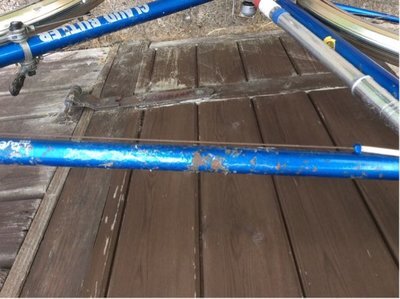 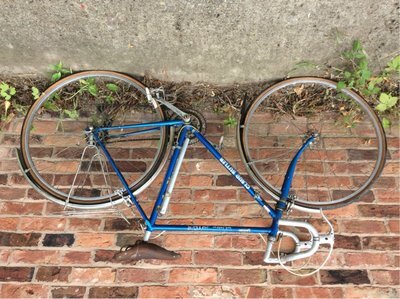 I had one of these which I rode LEJOG on in 1981. I bought it from Rayment cycles in Brighton and with his advice made the following modifications for a long tour:


The Wolber tyres were quite innovative at the time. I think they had a fine steel mesh to prevent puntures. I never had a single puncture even though I did lEJOG fully laden with camping gear.

I've got an old photo somewhere of me under the signpost at Land's End, wearing a new-fangled Goretex jacket if I remember.
Top
Post Reply
31 posts