Slightly off topic but the point has already been mentioned above so this tip may be useful to someone.
I'm a fan of the B&M Cyclestar bar end mirrors for drops but my 708 Randonneur has bar end shifters fitted. I really dislike the obtrusive & clumsy looking plastic clamp fittings that come with their other mirrors so I'm about to adapt this method, which I've already used very successfully on foam covered butterfly bars.
B&Q sell metre lengths of hollow aluminium tubing of various bores, one of which will exactly accept the sawn-off stem of a Cyclestar mirror (I'd nip out to the shed for measurements but it's dark & pouring down....) Duct tape a short length of this tube along the outside of your handlebar in the preferred position before over-wrapping with bar tape, then pierce a small hole in the tape(to rear) to access it. Saw off the ball joint from the handlebar end of the mirror stem & insert the cut end of the remaining stem into the tube on the bar. Mine proved a tight fit & held the mirror stem firmly in place, while still allowing it to be pulled free & stashed away if I need to leave the bike unattended.
The short shaft with the right-angled bend at the mirror end (as fitted to the 901/3 & 903/3 versions) proved best for this purpose. Some initial experimentation will be needed to get the angle of the tube correct for your preferred mirror position and handlebar orientation before firmly taping it up, in order for the mirror to get the required field of view from your usual riding eye line.
The short bulge under the bar tape is barely noticeable & produces a much neater solution than the plastic clamps & is much less restricting of the available hand positions.
Top

I've read this several times but still can't quite work it out. Could you post some pictures sometime?
Top

I find this CatEye RVM unbeatable both in performance and price it folds up between tops and hooks when he bike is stored or parked,£6 last time I bought one(click on the pic for a larger image):- 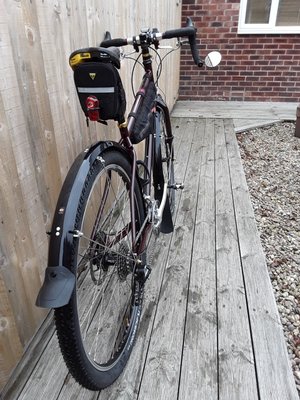 Sorry if my description wasn't clear, LollyKat. Unfortunately I've since stripped out the original arrangement fitted to the butterfly bars. In any case there's very little to see once covered by bar tape but give me a few days & (SWMBO/Christmas pressures permitting

) I'll cobble the arrangement up on a spare set of untaped dropped bars & post photo(s) to give you the idea.
Top

That would be helpful if you could sometime. The only thing that has put me off using bar-end shifters is being unable to use a mirror.
Top

Hi LollyKat
After a lot of scratching around I've finally found the bits I'd removed from an old butterfly bar & having roughly fitted them in place on a spare drop bar you'll hopefully follow the basic idea for fitting a B&M mirror neatly alongside a drop bar end gear selector from the photos, if you also refer to my earlier post. 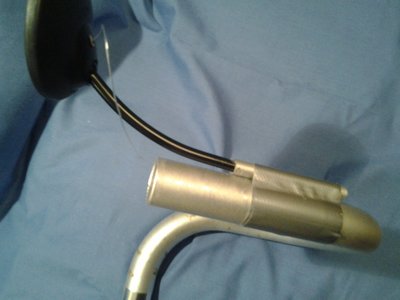 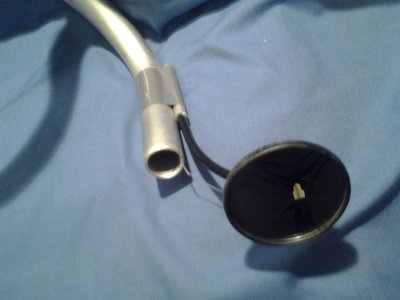 I did suggest using a B&M right-angled stem mirror but notice that I'd actually used a long curved stem on the original version & it works on the drops version so I'll stick with it. I'm already looking at "tweaks" - I'll probably mount the (silver) tube (from B&Q) under the drop alongside the gear cable & reinforce the duct tape wrapping with Araldite. I'll shorten the silver tube slightly & possibly chamfer the front end to smooth the step down when wrapping the outer bar tape. The (black) B&M stem, from which the ball end has been removed, will probably be shortened slightly & bent a bit further out to provide more "knuckle room" around the gear lever & also give the opportunity to use the larger B&M mirror that I prefer to the small one in the photo.
Hope the photos appear OK, I'm old school & much happier with spanners than a keyboard!
Top

That's brilliant - it is all clear now Of course now that I see it I wonder why I didn't follow your written description, but as they say a picture is worth a thousand words! Thank you so much for making the time and effort.

A pleasure Lollykat. Like you I'm enamoured with the bar end shifters on my restored no.2 bike, finding them practical and a quirky change from STI's. But cycling in a big city I do insist on a mirror.
I meant to add that when finishing the job I'll be wrapping the bars under the (black) stem but over the aluminium sleeve to keep things looking neat & I suspect that good, tight wraps of duct- & bar-tape would hold the sleeve securely & may not require it to be Araldited to the bar unless you're really into belt-and braces. However it's these tweaks to make it suit you personally that add to the pleasure of creating these things....
You may have noticed the length of fishing line in the photos, securing the mirror head to the bar end. I've lost a couple of mirrors, unnoticed until later, while negotiating overgrown/rough cycle tracks, so now secure them even though it means I can't remove the mirror when the bike is left unattended. (I suspect it was my frequent removal/replacement of the mirror head that had worn the socket surfaces in the first place, mea culpa!)
The anodised aluminium tubing I obtained from B&Q is 8mm external diameter & costs £4.28 per metre. If the mirror stem isn't a tight enough fit then a tap with a hammer should distort the sleeve enough to grip. The B&M mirror used is the original long stem model numbered 901(small mirror) or 903(large). I find the large mirror gives a far superior field of view but does look a bit "clunky".
You'll only use a short piece of the tubing so, while you're there, you may want to follow my lead & buy an additional length of narrower diameter tube to fit snugly inside the 8mm surplus. I'm not a fan of chain stay mounted side stands so cobbled up a pole-style folding stand (similar to a Click-Stand) using adhesive to create tent/fishing pole style sleeve joints. Strung together internally with elastic cord & folded down this fits neatly onto a spare Lezeyne pump frame-mount or else in my Ortlieb bar bag. A nice job for when snow stops play.....(but you do need to carry a small Velcro strap to lock a brake lever on when using it).
Top

Mike_Ayling wrote:IMHO if any injury caused by these devices had ever been recorded the recall notices would have gone out immediately.

The inaction on flexible mudguards without safety release clips suggests there might not be a recall. After all, it's "only" cyclists.
MJR, mostly pedalling 3-speed roadsters. KL+West Norfolk BUG incl social easy rides http://www.klwnbug.co.uk
All the above is CC-By-SA and no other implied copyright license to Cycle magazine.
Top

Many thanks for the further details - I guessed the fishing line was probably a safety net (sorry!)
Top
Post Reply
40 posts