Summer is here (I think) so I was motivated to have our Thompson Orbit of 27 years (bought second hand even then!) resprayed in its original pink colour. I'm continually amazed at the reaction the colour gets over the bike ! I've just spent the evenings of this after work rebuilding 'Tommo' and can declare everything taken off was replaced back on save for one gear cable as it was too frayed to reuse. All others were re greased. The eccentric Hayden BB was impossible to adjust with the single hole so was done with a mallet ! I found the Thomspson decals thanks to Maggie Thompson whose other half Andy I believe may be the builder of said frame. All sourced through the brilliant Cycling UK forum. YOu won't get anything close to technical knowledge and advice on just riding, touring and building than this forum. Worth the supporter fee many times ! Chapeau! 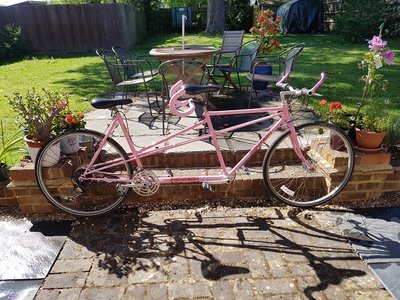 That rear brake cable routing is poor. It would be better to use a pulley wheel brake hanger if possible
Top

Rather than criticise the cable routing (which is probably original) may I say well done, you've clearly gone to a lot of effort.

A joy to behold.
Top

Thanks all. Good spot on the rear cable ! Cycling UK members don't miss a thing ! . As Ian, says, its the way its been set up always but I think it could e better as per you hint. Pic is off my better half ready for a spin last May in Les Bauges (the wqllows) We rode to lake Annecy for lunch. Perfect roads for tandem riding or just riding. 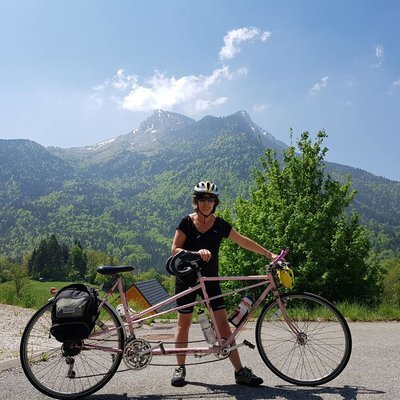 On the pinkometer that's gone up to 11

How is the braking, out of interest?
Top

Well Malcolm you've certainly looked after that, it appears in remarkable condition. It's a factory built frame that I certainly designed but it's likely I would have had a limited input into its actual building. Having said that I do recall instances of building some of the tandems, especially the early Orbit ones. It probably dates from 1984ish (Iv'e slept since then!) as the Thompson name was dropped when the Clements became involved and they wouldn't have had a clue as to where to start building a tandem frame!

The tandems were marketed as "The Thompson Twin" , a reference to our twin sons.

I suspect the braking requires a degree of forward planning but unfortunately there weren't a lot of brake options back then.How times have changed!
I agree about the cable routing, it's not great but the bean counter also had an unfortunate input into the design which I resented.


It was kind of Maggie to sort out the decals, we separated £0 years ago ( but remain good friends)
Many happy miles to come!

Who painted the frame? - Do you have a RAL reference for that pink colour?
Top