What puzzles me is why they are not just called scooters.
Marketing I guess.
Top

mattsccm wrote:What puzzles me is why they are not just called scooters.
Marketing I guess.

That'll be about right

Mick F wrote:How do you go up hills on them?

Shame we only get to see the start + a van

mattsccm wrote:What puzzles me is why they are not just called scooters.
Marketing I guess.

I had a Triang scooter back in the olden days.
This is me - complete with bandage on my chin from falling over in the playground at school - I still have the scar!
Big sister had a Phillips bike on which I first learned to ride. 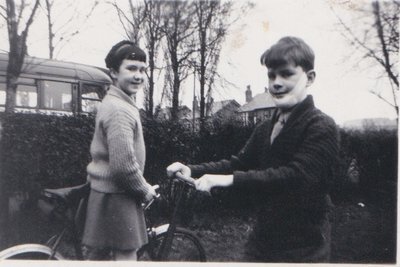 Mick F wrote:How do you go up hills on them?

Shame we only get to see the start + a van

From what I've seen of it on photographs and movies, it has nothing to write home about, other than its length.
Mick F. Cornwall
Top

For hills one could have a tandem scooter (just lengthen the platform), riders kick alternately to avoid TDC

From what I've seen of it on photographs and movies, it has nothing to write home about, other than its length.

Not steep then, just long. You could scoot up it, but it's hard work.

Often mused about cycling up it.
Mick F. Cornwall
Top

Did it about 10 days ago. Pleasant rather than hard. One of those silly scooters might add a challenge though.
Top

mattsccm wrote:Did it about 10 days ago. Pleasant rather than hard. One of those silly scooters might add a challenge though.

Hercule we were able to try several different models of Scooters including Morxes, Mibo, and Kostka.
I chose the Yedoo Trexx because it is made of aluminium and therefore it is lighter and seemed to roll more easily. Also the underside of the scooter does ground out sometimes and as it is aluminium it won’t go rusty. Footplate has two positions so can be raised for rougher terrain. My hubby wanted a faster ride so he chose the wolfer and he’s happy with it. I have therefore tried both and I prefer mine the Yedoo Trexx. As a fitness aid it’s fantastic and great fun, and for myself it is much more enjoyable than running.
Top

I should probably have posted this in the Tea Shop! I don’t see these as alternatives to bikes, and I really can’t see myself giving up my recumbent trikes. Their similarity to bicycles is probably a bit misleading. Rather, from an exercise point of view, they are an alternative form of “transport” like in-line skates or roller skis. In fact their similarity to cross-country skiing might suggest why they are apparently very popular in mainland Europe (Czech Republic in particular, it seems) and Scandinavia. In my case it’s about helping me rehab my dodgy knee whilst being out and about in the fresh air. Doing endless squats and leg lifts indoors is rather boring, but there’s no doubt it helps... if I back off for a bit, my knee reminds me!

Having done a bit of research into them, it’s amazing the sort of journeys people undertake on them... plenty across Europe, there is one woman circumnavigating the world. Mountains seem to be no barrier. At first this seemed a bit strange to me... but then I realised that my own interest in running ultra marathons is a bit niche too. At least with a kick bike you’ve got something to carry most of the gear!

I think I’m pretty much sold on the Yedoo Trexx. I’d better lie down for a bit... if the urge hasn’t passed, I think there may be one on order!
Top

You will not regret your decision, I love my Yedoo Trexx. Yes there are lots of people doing amazing tours on scooter, I hope to get a front rack for mine at some point as I’d like to do a few overnighters. A scooter could never replace a bike especially as I love my Recumbent bike so much, but it gives you another option for different situations.

I hope you have ordered from Ondrej at Op Scooters, he’s a great guy, Ondrej and his girlfriend even drove to our house in Kent one Saturday with four scooters to try, we all took them over the park for a spin.

I emailed Ondrej and he was very helpful, advising me against some and confirming my ideas about the Trexx and the Kickbike Safari. He also pointed out the Mibo GoodSpeed which has dual 26” wheels: more obviously suited for forest tracks I should think but I thought foot/wheel conflict would be very likely in my case at least!

In the end I went for the Trexx (ordered from OP Scooters of course). Mudguards have also been ordered in case it never stops raining. The light weight was a major deciding factor, but I was also impressed by the amount of development work Yedoo seem to have put into it. Yedoo have an extensive blog archive which is well worth a read for anyone interested. I’m now waiting for its arrival and wondering what I have let myself in for! Maybe I need to try it on the turbo trainer first to get used to it!