I also discovered that there’s a CTC affiliated kickbike group...

Rather far from me though!
Top 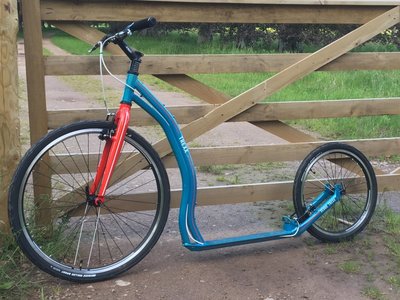 My Yedoo Trexx arrived earlier in the week. After a few trial scoots around the block it got taken out for real today on a mix of very quiet tarmac and a few dirt tracks.

First mile was getting the hang of switching feet. The footboard is just slightly wider than the width of an average foot so it needs a shuffle off/shuffle on technique. That was fairly straightforward. The route I took - where I often go running - was, I thought, pretty flat but within half a mile I was grinding slowly up what had never before seemed much of a gradient but had turned into Everest. Switching feet going uphill proved to be hard work. Another downhill provided some respite then there was a really steep uphill: I quickly became adept and jumping off, running, jumping back on again in one fluid move.

I’d also raised the footboard to the higher of the two positions (double dropouts on the rear facilitate this) thinking that would keep me safe from grounding, but a sleeping policeman caught me out. Good job it’s aluminium and has a pair of rails on the base for protecting against this just this sort of abuse.

Gradually I got into the swing of things. Overall I was going just a bit faster than running pace and got through 6.5 miles in 44 minutes. It was much harder than running, however, and I saw my heart rate climb up into the the 160 bpm range - that’s normally hill repeat or half mile interval territory for me. I was conscious of using my arms a lot more, much in a similar way to cross country skiing. By the time I got back my hamstrings were complaining loudly, and it felt as though I’d just run 10km flat out. My knees were fine: it really is a low impact activity. Your muscles get a good workout (particularly the static leg, which is why swapping over frequently is essential) but there’s little joint trauma.

Overall this looks good and an excellent complement to running. It is definitely not an alternative to cycling: it’s much harder work and speeds are much lower. I think it’s better looked as as not in the class of bikes but as an augmentation to running.

As to the Trexx: the tyres felt a bit wooden and I’ve got a set of Kojaks that I will try instead. The frame is beautifully made. Components (such as there are any) seem of good quality and there don’t appear to be any cheap OEM items on it. It is ridiculously light (specs say 7.9kg, it certainly feels no heavier, and a couple of decent tyres could probably take off 0.5kg). The stem is a bit high and short for me but there’s bound to be something lurking in my bits box...

Technique and specific fitness need a bit of work, but I reckon this is great fun!
Top

Your new scooter looks the bees knees, glad your first ride went well. Its a couple of months since I got my scooter and now I don’t even think about switching feet. Yes it does ground out on the slightest bump but I have learnt to anticipate this and go around things. I’m sure your going to get on fine!
Top

I've seen just about the optimum use for these on a couple of Swiss mountain passes. At a hotel at the bottom of the pass you hire an ebike which takes you to the top, where you leave the ebike at the summit restaurant. You swap it for a kickbike, on which you swoop down on lovely smooth grass zigzags on a former road, now a track. Small trucks contantly shuttle the ebikes down and the kickbikes up. Pointless, wasteful - but lovely.
Top

Lovely? How does one brake?

The obvious answer is that mine has V-brakes; some have discs (overkill?). One of the things that put me off the folding Swifty scooters (the model that set me off on this in the first place) is that the rear brake is foot operated directly onto the rear tyre.

As to alpine passes, there’s more than a few YouTube videos of riders tackling major climbs in the Alps. At first I asked myself why, then it occurred to me that I wouldn’t question why anyone would run up, and scooting is slightly faster upnand much faster down!

I was hobbling about yesterday, and to a lesser extent today: Friday’s outing was more testing than I thought! Should have thighs the size of tree trunks in a few weeks, I reckon

Plus One for kickbikes without electric motors, they are so simple, should cost much less than standard bikes instead of much more as e-bikes do, I hope kickbikes become fashionable and replace e-bikes

Would the braking power be sufficient to descend the Tourmalet without incident?
Entertainer, intellectual, idealist, PoB, 30120
Cycling-of course, but it is far better on a Gillott
We love safety cameras, we hate bullies
Top

Brakes are for wimps*!

(*When I did a French end-to-end it became my slightly tongue in cheek motto. There were a group of us who rode together, we just seemed to be happy at the same pace & in northern France we stuck together pretty well. Once we got to the Massif Central I would rapidly get dropped off the back of the group on ascents but would catch & drop the others once over the top.)
Top

Another “serious” ride today (as opposed to scooting round the neighbourhood feeling like I’m a teenager). 7 miles, in the same time it took me to do 6 and a bit last week. I lowered the footboard (higher dropout on rear) and lowered the bars with a stem I found in the bits box. Swapped the Kenda tyres for a pair of Marathons reserved for winter use on my recumbent. Much quicker, the tyres probably have a lot to do with it, but I did notice that the bearings are very sensitive to the tension in the QR. I also read that the “industrial” bearings in the Novatec hubs have a particularly viscous grease which loosens up with a bit of use. My legs felt like rubber when I got home, so this must be doing me some good!
Top

Six weeks on and I’m kicking away with even more enthusiasm!

The self consciousness bit went pretty quick (well, I do also ride a recumbent!). I’m getting quicker and at a push can do 5 miles in 30 mins on a moderately rolling course (there’s nothing round here that would count as flat). Even though this is much slower tfan I can do on a bike, it doesn’t trouble me at all. Apart from the wheels and handlebars it seems nothing like cycling at all and far more like running; thinking of speeds in mins/mile rather than mph probably helps, but the physical activity itself is very like running.

Hills are hard; you have less momentum to carry you forward and your profile is much less aero. But it’s the same idea as running: shorter strides, quick cadence gets you up even surprisingly steep gradients even on rough farm tracks. If it’s too steep to kick, I can jump off and run up in one fluid movement and jump back on again when it gets flat enough.

Some comments about the Yedoo: I’ve lowered the bars but definitely need something more curved for my wrists. I’ve added mudguards but the rear one sounds like it’s about to self destruct on some rough sections, I either need to find a way to add another pair of stays or cut it short (for ease of transport that might not be a bad idea). The back wheel is a bit wobbly and needs a retension and truing. One thing that really puzzled me is that I have to keep the QRs clamped with less force than I’m used to; anything more and the drag in the bearings increases noticeably. I’m even thinking of swapping in a spare 26” and nicking the 20” front from my Dahon folder, though at low clamp tensions the wheels spin beautifully. They are described as having “sealed industrial bearings”, not sure what that means.

I’m riding about 4 times a week, mostly short scoots but at least twice a week doing 45-60 minutes which is hard work and performed at the same sort of intensity as a tempo session run over the same time. My legs are a lot stronger and after a year of disappointing running performances I recently did a very satisfying time in a local hill race without any achy joints afterwards. I’m onto a winner here, I think!
Top

PS I’m even thinking of adding unicycling to my repertoire, my inner teenager must be restless!
Top

For a giggle, google up Peter Hummers' 'Fantasy footbikes'.
Top

Many thanks for that link Sid

Hi I have a a Crusis scooter, alloy frame, 20" front wheel 16 bck. I had a folding Knowped scooter for years that I used with the kids and dog walking but it was not stable at speed. Sold it for nearly what I paid for it. The Crusis is a great laugh, its like being 6 again. As stated elsewhere fun down hill, fun on the flat but slow up hill. I usually jump off and push or jog on the really big hills stay on board and kick for the shorter uphill stretches. Carrying luggage is tricky. You will need a stable rucksack or waist pack. I usually use a messenger bag. I mostly use it recreationally on the many cycle paths or down the canal towpath. I commute about 2.5 miles each way to work on it occasionally. Its harder and slower than cycling but faster and less impact stress than running. I do not run anymore as it damages mt back, knees and shins. I often use it when I drop the car off at the garage as it fits in the boot much better than my hybrid bike. So in summary not as practical as a bicycle but good fun anyway. My wife and kids hate me using it but I love it, so sod them. I get odd looks, some abuse which I return with interest (personal choice) and adults and teenagers sometimes stop me and ask if they can have a go. I usually let them have a go as long as I have time. You only live once so if you enjoy and its not hurting anyone else go for it.
Top
Post Reply
57 posts