rjb wrote:.................I hit what I think was a badger on the way home from work one night. On a slightly downhill section when I would have been doing 30mph +. I recall seeing something in the road but when I looked closer couldn't see anything. I was then launched up into the air. Fortunately I managed to stay upright and eventually stopped. My wrists felt as if I had broken them with the jolt. I turned around and retraced my route expecting to find a dead animal in the road but only heard something large crawling through the undergrowth...............

I've hit squirrels and rabbits, but never anything as big as a badger.
A squirrel ran right out in front of me and I ran right over it's middle - after stopping I saw it crawling into the verge - you've no idea how bad I felt.
On greenways and unlit roads, sometimes all you'll see is the reflections of your lights in the eyes of the creature.

tatanab wrote:The headtube is not a good idea because in generations past riders routinely used capes in the rain, some still do, and in other countries it is common amongst utility riders. it would also preclude the use of bar bags or wicker baskets for example. Perhaps this is why it used to be common on continental European to have a dynamo light fitted near the tip of the front mudguard. Having tried that I can say that it is not a good location because it gets covered in all sorts of dirt from the front wheel. Ergo, there is no universal solution.

I used that arrangement successfully for just that reason - using a cape. It needs to be a lightweight lamp, and I added an extra pair of mudguard stays to support it (on a plastic mudguard). Yes, the headlamp did get dirty, but I didn't find cleaning it that much of a chore. In these photos of French bikes you will see that the front mudguards have a much longer forward extension than mudguards normally available in British shops, so that water thrown forward goes downwards rather than upwards. The French do/did it better than us. 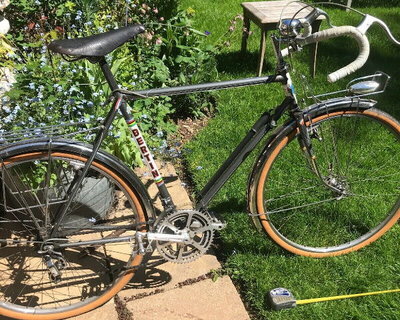 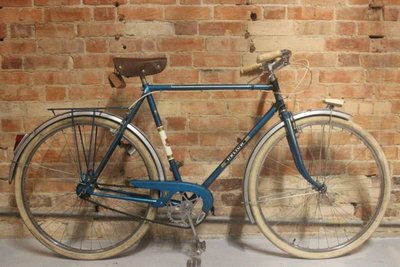 When I switched from a dynamo powered halogen headlamp to a battery powered LED lamp, I mounted it differently, partly because I found myself cycling in both the dark and the rain far less frequently than formerly, but also because it was a significantly heavier lamp needing different fittings.
All times are UTC+01:00
Page 5 of 5