I was able to try some more bicycles this afternoon, this time from German manufacturer Schindelhauer. I tried the Ludwig and the Frederich.

I did not like the geometry of the Ludwig: the wheelbase and reach were too short and it felt cramped and uncomfortable. The Frederich had a better wheelbase, but the handlebars made the riding position too upright for my liking. However, the people at the shop suggested changing the handlebars for the same type as in the Ludwig, which they did for me to test, and, when I tested this, I found the geometry much to my liking. This was the best of the bicycles that I have tested so far. The gear ratios were still a little short, but the people from the shop also offered to replace the 46t front ring with a 50t front ring without extra cost. The people at that shop were very helpful.

I just need now to compare this with the Marin Presidio 4, for which I am still waiting to be delivered at the other shop. This has a 50t front ring and a 22t rear ring (compared to the 24t rear ring of the Frederich). The geometry is slightly different: it is somewhat shorter. It is also considerably less expensive than the Schindelhauer. If the Marin is also workable, I will need to consider whether the extra expense of the Schindelhauer is worthwhile.

One thing that the Schindelhauer does have is a Brooks leather saddle. These, I understand, require regular maintenance and are not good in the rain. I need to store my bicycle outside, so I am a little concerned about this. I am also concerned about such an expensive saddle being stolen. I could always swap this for another saddle, but a concern then is that I would be paying extra for something that I did not use. The people in the shop indicate that there is a cover available for the Brooks saddle, but I am not sure how effective that this would be leaving it parked outside in pouring rain during the winter. Does anyone have any experience of this sort of saddle?
Top

if the saddle doesn't get pinched (incredibly likely in London, check out all the 'lightly used' Brooks saddles on ebay….) it will suffer in the weather for sure. Brooks saddles can be very comfortable but on a commuting bike they are a bit impractical.

Thank you for that. The saddle is easy to replace, but what might one do about the leather handlebar covers? Are they a problem in the rain, too?
Top

yes, they are OK in the dry but they are about as daft as you can get for a bike that is going to live outdoors.

FWIW the biggest problem with any new bike left outdoors is that some thieving scumbag will want to nick it. I have a bike that looks fairly revolting but works OK. If you have to park your bike in a place where thieving is a problem (which is most places these days) I would definitely suggest that you consider making the old bike work for you by improving it, but without making it obvious that you have spent any money on it.

I don't think you have confirmed it or not but I think you have a screw-on freewheel with a 14T smallest sprocket. If so you could easily satisfy your 'big gear lust' by fitting a rear wheel with a cassette hub; most cassette hubs will take an 11T sprocket and 52/11 ought to be as big as you (or anyone else) is likely to need.

I had considered having my existing bicycle refurbished, but that would not give me belt drive, hub gears, a hub dynamo nor a better frame.

As to the handlebar covers, how easy are these to replace, I wonder?

In relation to security, at home, I had a metal D bar concreted into my front yard some years ago. I lock my current bicycle to it with 2 D locks and one wire lock. At work, it is locked again to metal frames with the same locks. I plan to use 3 D locks for the new bicycle.

I shall have to try the Marin to see how it compares.
Top

jamespetts wrote:As to speed, I do not cycle anything like as fast as PH has suggested - I can get up to 20mph in favourable conditions with well inflated tyres when working hard. Perhaps I just prefer to pedal more slowly and forcefully than some?

Not sure what you mean by this. I can go considerably faster than that under favourable conditions and I would not regard myself as a fast rider.
I might be going only 3 mph on the hills. I think you should try pedalling faster than you appear to be.
Tyres make a huge difference, both type and inflation.
"It takes a genius to spot the obvious" - my old physics master
Top

jamespetts wrote:I had considered having my existing bicycle refurbished, but that would not give me belt drive, hub gears, a hub dynamo nor a better frame.

well it could do, it depends what sort of refurb you do. For example you can buy a hub generator wheel in decathlon for £30 and a Nexus-8 equipped rear wheel (with shifter etc) for about £150. You can use a chain tensioner even with your present frame. A new frame may or may not be 'better' in any measurable way.

FWIW Belt drive seems like a good idea but it often causes more problems that it solves; a lot of installations (on production bikes) I would describe as 'half-baked rubbish' . It almost certainly won't be suitable for you anyway because you will probably want some ridiculous gearing and you don't have anything like the same gearing choices as with chain drive.

As to the handlebar covers, how easy are these to replace, I wonder?

In relation to security, at home, I had a metal D bar concreted into my front yard some years ago. I lock my current bicycle to it with 2 D locks and one wire lock. At work, it is locked again to metal frames with the same locks. I plan to use 3 D locks for the new bicycle.

You may be imagining that the reason your old bike has not been nicked is that it is very well secured. This is not the case; the reason is most likely that there are better bikes than that which are less well secured nearby. Crims can get through any D lock in about twenty seconds. Using three D locks instead of two just makes stealing your bike take a minute instead of forty seconds. You could have half a dozen locks on a new bike and that would still get nicked before the tatty one next to it (with a single lock) would be touched.

It seems a shame to spend up to 2000.00 on a quality bike and then store it outside. Info. about storage solutions here:

jamespetts wrote:I was able to try some more bicycles this afternoon, this time from German manufacturer Schindelhauer. I tried the Ludwig and the Frederich.

I did not like the geometry of the Ludwig: the wheelbase and reach were too short and it felt cramped and uncomfortable. The Frederich had a better wheelbase, but the handlebars made the riding position too upright for my liking.

None of the riders in the gallery look comfortable to me. It looks as though they are struggling to keep in a suitable riding position with a lot of weight on the handlebars. Look at their arms.
"It takes a genius to spot the obvious" - my old physics master
Top

See attached a picture of the place where I store my bicycle at the front of the house. I have a narrow hallway whose wallpaper I do not want to damage by bringing it in. That hoop is very firmly concreted into the ground. 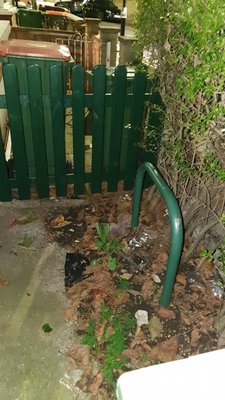 At the other end, I park my bicycle in a place that is busy during the daytime and, at night, is restricted to only one entrance/exit available to the public, which entrance/exit is covered by CCTV.

As to the riders on the website not looking comfortable, presumably they were not using the version with the swapped handlebars that I tested and found to be very comfortable.

In any event, I am still waiting to test the Marin before making any decisions.
Top

The hoop is mild steel, angle grinder will go thru it faster than a d-lock.
Try to find an old naval anchor, most thieves don't have truck mounted cranes,
yet....

I cannot sensibly put a naval anchor in my front yard. Likewise, the Bike Vault will not fit.

The Marin Presidio 4 arrived at Cycle Republic this afternoon, but they had sent a large instead of an extra large, and it was too small: the seat had to be put to nearly the top of the post and the reach was too short so that it felt uncomfortably cramped. They told me that they did not have any of the XL in stock. Nowhere else in the UK that I can find online appears to have this in stock.

That sadly rules out what may be the more practical of the two options that fitted my requirements. Nonetheless, the Schindelhauer can have its saddle and handlebar covers replaced. This may be the only viable option.
Top

I have now ordered the Shindelhauer, together with a cover for the Brooks saddle (which I anticipate that I may well have to replace at some point) and some high security bicycle locks (a D-lock and two chains, one to keep at home and one to keep at work to avoid having to carry the weight of the chains between two places).

As to the hoop at home, this is the same type as used in municipal installations, and I have not heard of these being destroyed to steal bicycles.

Thank you all for your assistance in helping me to find a suitable bicycle.
Top

Which model? I like the look of them both. though don't know anything about them.
Maybe after you've had it a while, you'd let us know how you've got on with it and if it really is faster.
Top

It was the Frederich that I ordered (with the modified handlebars and front chaining). I will have to report back as to how I get on with it.
Top
Post Reply
32 posts