My Grandad was Bill Padbury of W H Padbury Ltd of Prestwich if anybody has heard of him.

He was the local Raleigh Dealer & cycling enthusiast.

Among other things he hand built a Jack Taylor bike from spares he acquired though his links with the business.

This bike is still in the family and I am keen to know more about it - can anybody help please?

Attached are some photos. It is not in the immaculate condition that it would have been in when Grandad owned it.

http://www.classiclightweights.co.uk/de ... aylor.html
I stand and rejoice everytime I see a woman ride by on a wheel the picture of free, untrammeled womanhood. HG Wells
Top

I can't see any photos unfortunately but Jack Taylor framesets are usually high quality and in some places (notably the USA) they are rather sought after. It has been my observation that, to the right person, a good frameset of this sort is worth as much as a complete bike might be; the parts would have to be pretty special to make a complete bike worth a lot more than the frameset alone would be.

Apologies, not sure where the photos went, but here goes posting again. 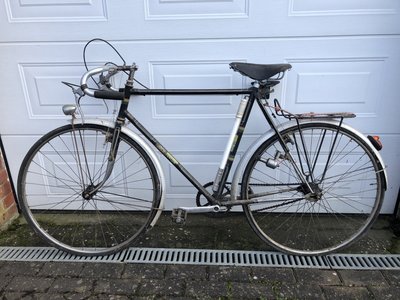 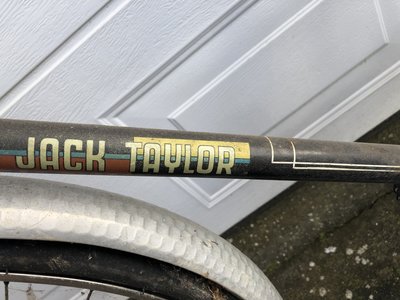 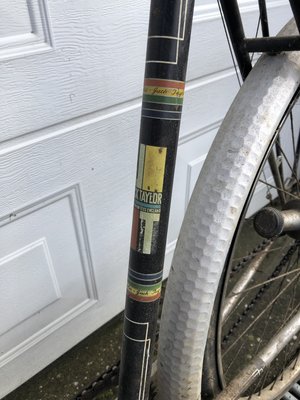 There will be a frame number stamped under the bottom bracket. This link:
http://www.blackbirdsf.org/taylor/serials.html
will give you a lot of information about the date that frame was built, as well as a lot of other information. The 'box lining' on the frame is certainly the handiwork of Jack Taylor himself. In fact your frame looks very much like a 1974 JT 'Super Clubman' frame I own.
The mudguards on your bike - those huge dimpled aluminium guards - are also undoubtedly original. The Taylors always fitted these on their touring bikes.
NB the 'register' of specific machines mentioned in the link is no longer functioning, although there is a Facebook page for a Jack Taylor owners' group..
Last edited by ChrisButch on 17 Feb 2020, 8:22pm, edited 1 time in total.
Top

I have been doing some more digging around and have come up with the following.

We always thought that Grandad had built the bike himself but I have found a letter which seems to indicate he had it made to his own requirements and it could be that this was in 1963.

The letter is below.

Also, there is no serial number under the bottom bracket, again picture attached, am I looking in the right place? 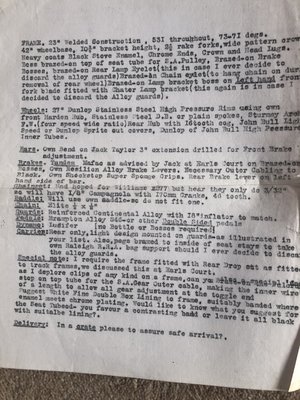 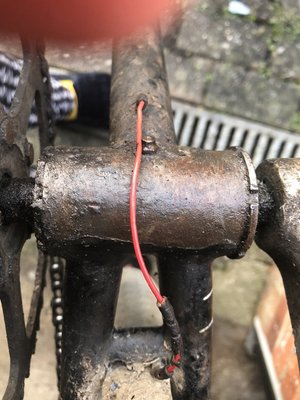 I would suggest whatever you do, don't get it repainted. It looks good in it's 'lived in ' state. Chainset is almost certainly a later replacement as the wheels possibly are too. A frame like that would have been made to grandfathers requirements most likely, assuming it was his from new. Jack Taylor's might have built it up but quite likely grandad built it himself using some parts he already had ( haven't looked at the paperwork you posted in honesty ) Can only echo it is a desirable machine to certain enthusiasts. (Like me!) .

Just been looking at a refurbished Jack Taylor on e Bay with a very unusual frame (Flying Gate) that's starting at £1250 .00 .
Having said that a paint job with all that box and lug lining would probably cost around £400 mark.
Top

OP, if you have not already seen it, this video might interest you:

The serial number will be on one of the rear wheel fittings of the frame. They were number sequentially and the Jack Taylor Register online will give an accurate date.
Current status report:
Back on two wheels in deepest Pastyland and loving every minute. Mission: to enjoy big, bad hills again.
Top

Just to show my ignorance, where abouts will I find the rear wheel fittings? - is that where the wheel is attached to the frame?

I think there are two digits on the BB shell, near the dimple to left of the dynamo wire. If the frame number is on the dropouts this is where the rear wheel axle is fastened to the frame.

Most of the bike looks to be as per the specification sheet (including the 27" wheels with stainless rims) apart from the spokes (which don't seem to be stainless) and the crankset, which looks like a stronglight or TA one, with the small 'cyclotouriste' bolt circle. Harden hubs are now a collector's item.

They stopped making both John Bull and Dunlop Sprite tyres as well as Harden hubs some time in the 1960s I think, so a 1960s date sounds correct.

Clearly a thinking man, he opted for the Sturmey Archer FW hub gear. A SA 5s hub became available in the mid 1960s and he might have opted for that if it was available, again suggesting an early 1960s date for the build. The SA hub should have a date mark on the shell, indicating the month and the year of manufacture in four digits.

Once again to show my ignorance but does our bike have Harden Hubs?

what more do you need to know?

The spec sheet says it has a Harden front hub. It might well still be there, you can't see in the photos.


- clean the bike
- service all the bearings (grease gun), oil the rear hub
- fit a new chain and sprocket (not expensive)
- locally repair the paintwork around the Bottom bracket. (*)
- fit new tyres, tubes, and brake cables where necessary.
- fit a front mudflap; salt spray on the BB shell is what has caused the rusting there.

(*) I think you can make the bike look a lot better with a local paint repair, and the only decals/lining you would have to redo would be the box lining on the chainstays.

We need to decide what we are going to do with the bike and to be honest selling it is an option.

I may try to search out a specialist bike valuer and see what they say.

Thank you for your help.