Old bike in dry shed, unused for 30 years. How to revive it ? 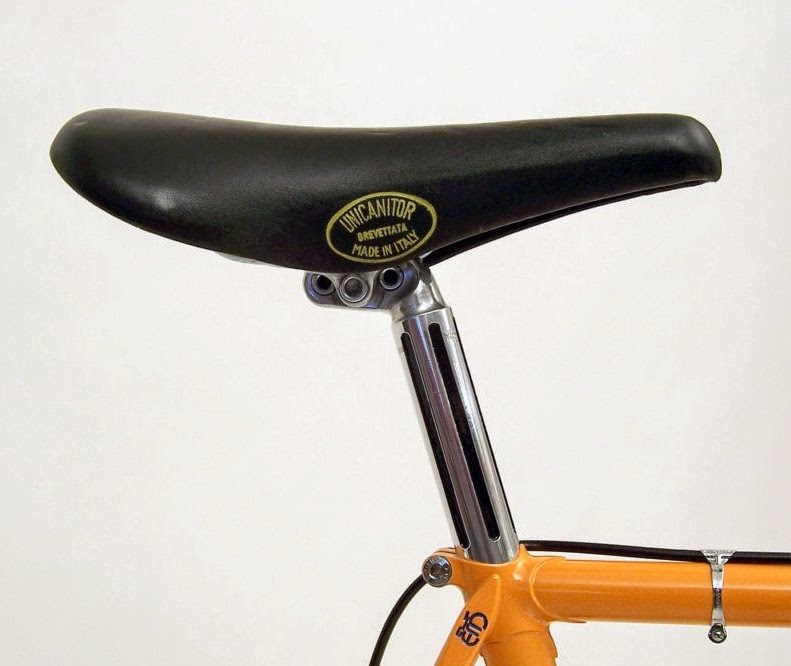 one of the first plastic hulled saddles, from the early 1960s onwards in various guises, it spelt the death knell for 'proper leather saddles' in racing because it was so much lighter in weight. Basic models had just the plastic hull, with no cover, which made them very weather resistant and maintenance free.

The hull of such a saddle may have 'ARIUS' marked underneath; IIRC this means it is a Spanish-made Unica Nitor copy but these Arius hulls were also used in Cinelli-branded saddles etc. as well as Arius and Milremo ones. 'Period correct' on a 1970's road bike.

Looks like you have a tubular tyre at the front of the bike not a clincher.
Some people do use these for day to day riding but typically used for proper racing.

Not really practical these days, so that would be anew set of rims or wheels
Top

Brucey wrote:Certain types may be worth a small amount of money since quality ones are no longer made new ...

SJS have IRD ones if you're prepared to pay. Pricey though unless you're doing a full renovation project.
Top

Brucey wrote:Certain types may be worth a small amount of money since quality ones are no longer made new ...

SJS have IRD ones if you're prepared to pay. Pricey though unless you're doing a full renovation project.

I'm not sure they qualify as 'quality', bearing in mind the number that have failed in use. Maybe they are better now....? They should be....

To be fair I haven't tried them, and was just going on SJS's description. I've got one or two good freewheels in stock for my bikes that use them

Brucey wrote:I'm not sure they qualify as 'quality', bearing in mind the number that have failed in use. Maybe they are better now....? They should be....

I returned two because they were to tight to screw on to a vintage hub (almost irreplaceable). That was about 4 years ago.
Top

Viner Super Course was quite a nice frameset BITD and not cheap either; typically built in 531 DB tubing. Some info about 1978 model here

The rear wheel looks like a 700C one; the reason I say that is because it is a black, and 27" rims had pretty much died out by the time black rims became popular. The rear hub looks like it has round cutouts, so could be campag Nuovo Tipo/Nuovo Gran sport large flange.

The sprockets are just a spare screw-on freewheel. Certain types may be worth a small amount of money since quality ones are no longer made new and you can't use vintage hubs without one. Oddly enough a shimano freewheel may be a useful thing, since without too much difficulty the body may well accept new sprockets taken from a new SunRace freewheel, possibly turning a clunky 14-19 UG freewheel into a more useful 14-28 freewheel with HG-esque shifting qualities.

The components are an interesting mix of good quality parts that would have been out of fashion by the late 1980s/early 1990s and those which were cheaply available. For example the photo is not clear but the rear mech (if it is a simplex) would have been the cheapest and most horrible RD you could buy when it was new; IIRC one model of simplex was so cheap it has rivets holding the pulleys in rather than bolts....? If the RD is campag that looks like a 980 or a 990; alright but cheap and cheerful rather than 'record' quality.

Why don't Campagnolo put model numbers on their stuff?
You are lucky if the Hermes winged helmet is easily visible!

BTW My first new bike (50 years ago) had a Simplex derailleur - total cost for the bike 21s 6d.

So it is a good bike after all - probably 531 etc
The Tubular tyres are just there to mislead - I used to do my touring using tubular tyres, just to be different.

The wheels look like new but are 30+ years old - I chose some standard wheels for this bike, they might be special build items
Hubs are Campag, rims are Mavic and take 25mm x 700c tyres [hardly used]
Down tube shifter is Campag as is the derailleur.

Amazing fact:-
I inflated the front wheel successfully!
Rear wheel didn't inflate - inner tube/valve seemed to have separated. However, I'd bought a spare inner tube before I incarcerated the bike { cost £3-95 }, so I tried that. It worked!
I re-discovered how much muscle is needed to get narrow beaded tyres onto a rim.

Question:- Should I remove the electrical tape and the pitiful excuse for lighting?
I'm not planning riding in heavy traffic or at night.