I'd argue that the current run of gravel bikes are exactly the same solution as the Galaxy - a dependable, go-anywhere/do-anything machine that is versatile in all weathers.
Top

the UK market for a traditional OTP touring bike (with dropped bars) has been shrinking for years, hit by both changes in bike buyers and endless fragmentation of the bicycle market. Also.... most of the folk that might have bought such a machine would (I daresay) begrudge doing so more than once a decade or so, and might be fussy about the specification too, which would send them off in the direction of more specialist/ custom builds. It is not a recipe for big OTP sales, and the current owners of Dawes perhaps couldn't see a way of making money this way.

I remember looking at some of the final iterations of the steel framed galaxy and super galaxy models and thinking that there was nothing wrong with them per se apart from;

a) they seemed a bit pricey for the spec they offered and
b) they were aimed pretty squarely at load-lugging.

Re b) that wasn't always so overtly the case; for decades if you wanted to carry four heavily laden panniers a galaxy often worked out a bit whippy. However this was arguably no bad thing in practice; the number of people who bought galaxies who then used them mostly un- (or lightly) laden greatly exceeded the number that usually loaded them up to the maximum. And for all their other flaws and idiosyncrasies, most galaxy models were at least OK to ride unladen, and not too heavy. I have seen plenty of such bikes pressed into service when folk are dipping their toe into the world of racing by riding a club 'ten' for example, with just removal of mudguards/racks and perhaps fitment of narrower tyres to turn it into something worth 'having a go' on. Where I live there are still lots of these bikes (and similar) being used for commuting etc (as well as leisure) and the biggest load they see is the occasional trip to the supermarket.

However if the design panders too much to load lugging requirements the result can be a bike which is a lot less pleasant to ride unladen, being somewhat heavy and stiff. Things like disc brakes can turn a steel fork rather stiff too.

IIRC Raleigh were producing an OTP touring bike until a few years ago, the 'royal'. It wasn't too pricey and from a distance it looked OK. But up close it was clear that the frame was mass produced and corners had been cut in the component specifications. I remember looking at one and feeling physically sickened by the fact that they had just nailed a MTB type chainset on the bike, so that the chainrings all cleared the chainstay by about 3/4" or so; it wouldn't appeal to a traditional buyer of a touring bike for this and a number of other reasons. To the average customer it might have looked like a bike which had a similar specification to a 'hybrid' but had dropped bars and a retro paint job, and mysteriously cost about £100 more. No surprise then that the model got quietly dropped.

So I guess the traditional OTP tourer has been painted into a corner somewhat; attacked from all sides too, it has become a niche product, best left to niche players....?

Ironically the current 'gravel bike' fashion is for bikes that are in effect a slightly different slant on the traditional tourer, but fashion being what it is, salesmen in bike shops probably keep quiet about that....

Dawes as a prestige cycle maker are over ? now a Halfords/Argos type of bike?
Top

Perhaps there's a market for selling touring bike frames so people can build up their Galaxy as they see fit?
Top 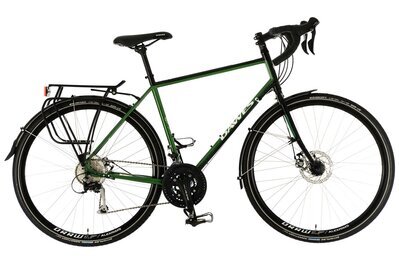 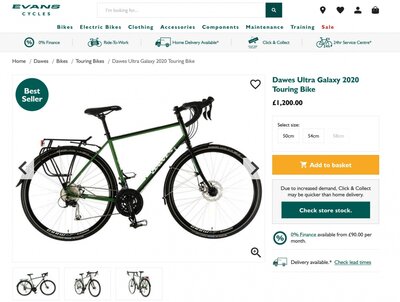 There is even a more sporty Galaxy available .. the "Cromo".. 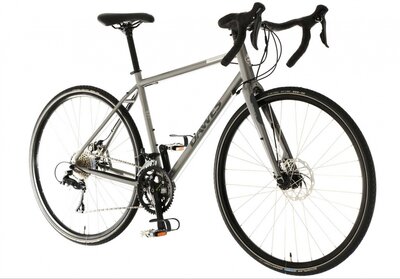 Perhaps a nod back to simpler, mudguard free, Galaxies ... 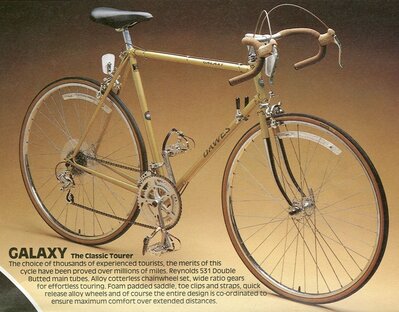 You can see the 1982 catalogue here

Dawes as a prestige cycle maker are over ? now a Halfords/Argos type of bike?

They are being trialed so I guess Dawes are ok to sell them....

Dawes as a prestige cycle maker are over ? now a Halfords/Argos type of bike?

They are being trialed so I guess Dawes are ok to sell them....

not really , the trial is for rental devices

However, it remains against the law to use a privately owned e-scooter, and users elsewhere could be fined, given penalty points on their licence and have their e-scooter impounded.

so the retail sale of them is dubious to say the least.

I am though seeing more and more of them in Streatham, lambeth. And the cops are doing nothing.
Top

From what I was told by those who worked there Dawes made Galaxy and Super Galaxy frames in a factory unit at Tysley up until David Grove took them over in 1998. Shortly afterwards production of brazed frames was contracted out to a company in Czechoslovakia when production of other frames went to the Far East.

I have one of the last frames fabricated at Tysley and one fabricated in Czechoslovakia. The difference is the Czech one has chunkier chainstays and a 27.2 seat tube, both are 531.

Two of their Tysley frame builders as part of their redundancy package had some of the frame building jigs and drawings of the older frames. They set themselves up in the old engine sheds at Tysley where the built frames for other companies. They also built my wife a frame to the specifications of the 1994 Ladies Galaxy. Unfortunately, they did not last too long as a few years later wanting another frame I went to see them and they were no longer there.
There is your way. There is my way. But there is no "the way".
Top

I also read that the bulk of their framebuilders ( if not all) were approaching retirement, minimal effort had taken place to train replacements and not in sufficient numbers, which all skewed the decision to move framebuilding offshore to the Czech lands.

A real shame - I used to own a lovely light green/turquoise British built Super Galaxy and still own a Czech built Galaxy (both 531).

Same colour as this:

Of course, they were never upto the standard of Raleigh Special Products framebuilding and didn’t produce any titanium frames in house (like Raleigh) but it was still a shame to see a stalwart of British cycling close production and now stop selling touring bikes.
Top

nez wrote:I have a 2008 super Galaxy hanging in my shed. It does have the oval downtube and is a lovely bike. Reynolds 853. I noticed over the years the spec for Super Galaxy got worse and worse while the price went down too. I can only presume their market was disappearing and they were chasing it. I have a Hope bottom bracket and DT Swiss wheels fitted and I expect to ride it for many years to come, if I'm preserved to do so!

I think the more recent version were somewhat downhill from there

Thanks for posting that. I have a Super Galaxy from that era, originally bought from Spa in 2009 and I bought it second hand about 6 months ago. It’s very similar to the one reviewed, it’s the same colour but has a Hollowtech II chainset and the wheels have been upgraded. I’m very happy with it.

Perhaps part of the problem for Dawes was that people buy a Galaxy and keep it for many years, so they don’t get repeat business. 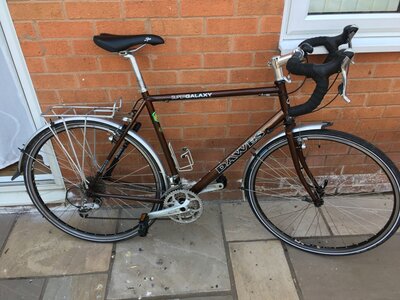 A cart horse trapped in the body of a man.
http://www.jogler2009.blogspot.com
Top

That’s part of the problem for makers of good quality touring bikes in general: their owners tend to keep them for ages and are very picky with kit so tend to do the custom route or upgrade bits regularly.

A complete contrast to racing culture where, for example, in Italy people will think nothing of spending 5-7k on a new bike every 1-2 years - allowing for inflation - (taken from the documentary where the cycling journalist had a Rourke frame but travelled around the world for components and visited both Cinelli and Campagnolo for the respective bits for his bike).
Top

1998 - I bought a Claud Butler Dalesman brand new, still got it, still hardly a scratch on the paint after many years of use. I chose it partly as I preferred the colour, and partly as I got a good discount from the local mtb shop that was stuck with it. Ive had to change a few components over the years, Ive probably brought it close to Super Galaxy spec with my own preferences and whims. Should I have bought the more expensive Dawes ? Maybe. But it was a lot of dosh at the time, and I wouldnt have learnt anything about bikes and components.

As far as I can tell it was the last of the Clauds, (then owned by Falcon), hand built in Britain, lifetime guarantee. I hope its properly brazed after reading that lot. Ive no reason to think it isnt, how can one tell ?
It doesnt wobble under load, and with the right tyres on is wonderfully smooth unladen. I think I'll be keeping it for a while longer.

I think that a lot of the blame for wobble is down to flimsy racks. Ally fatigues and weakens, as Ive found out.
Top

I had a Claud Butler Dalesman, bought around 1998, with a Campag Mirage groupset. I eventually wrote the frame off in a crash in a Cyclo-cross race. I replaced it with a Ridgeback Panorama, which I used to commute on and it rusted quite badly after a bad winter around 2014. Managed to keep it going for another couple of years, but scrapped the frame last year, then bought the Super Gal in March.
A cart horse trapped in the body of a man.
http://www.jogler2009.blogspot.com
Top
Post Reply
32 posts