In need of a lot of advice from some knowledgeable people.

During a lockdown clear out of our garage, a old racing bicycle that has been up in our garage loft for at least 10 years was brought down and put in the "rubbish"pile. I thought it was too good to throw away, and I could do it up. We don't know what it is, how old it is or if it's worth spending any spare time on

. I've (hopefully) attached photos for people to look over and can fingers crossed,shine some much needed light on it.

If anyone can help, would be much appreciated. 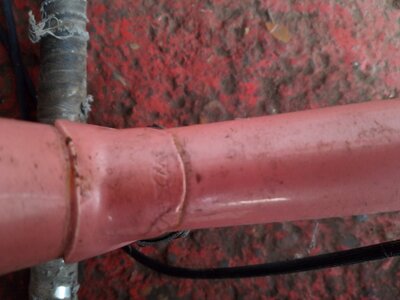 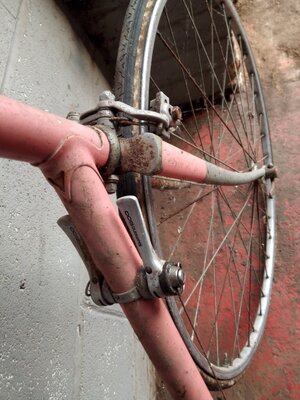 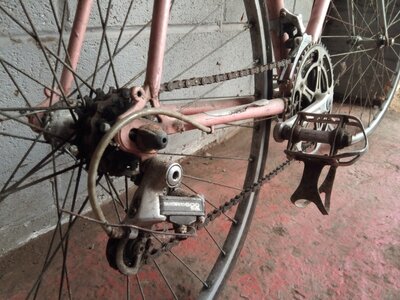 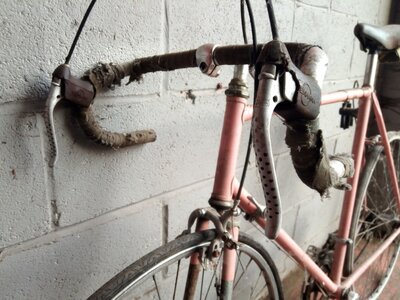 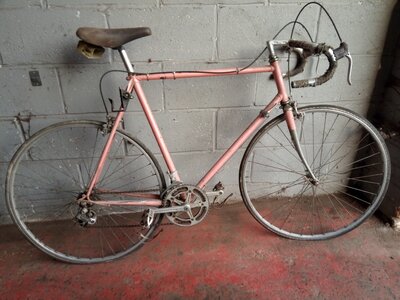 Something about those half-chrome forks suggest to me it’s a Falcon.
Is there any evidence of ‘ghost’ lettering in the faded paint where you would expect to see a brand name?
Current status report:
Back on two wheels in deepest Pastyland and loving every minute. Mission: to enjoy big, bad hills again.
Top

to me it looks most like a (probably resprayed?) Dawes (probably Mirage or 'Imperial' model perhaps), from the late '70s or early '80s, but with indexed gears that cannot have existed before ~1986, which may well have been added later. The braze-ons may give it away. I had a 1977 Dawes mirage and it was very similar. I'll see if I can find a picture of one.

Specific things that trigger this Dawes thought include

- the fork shape (curve of the blades)
- the chrome finish and crown type on the fork
- the top eyes on the seat stays; very Dawes-esque that.

If so, nice bike, worth fixing up, even if you have to lose the chrome on the fork. IIRC the typical spec was 531 DB main tubes and forks. 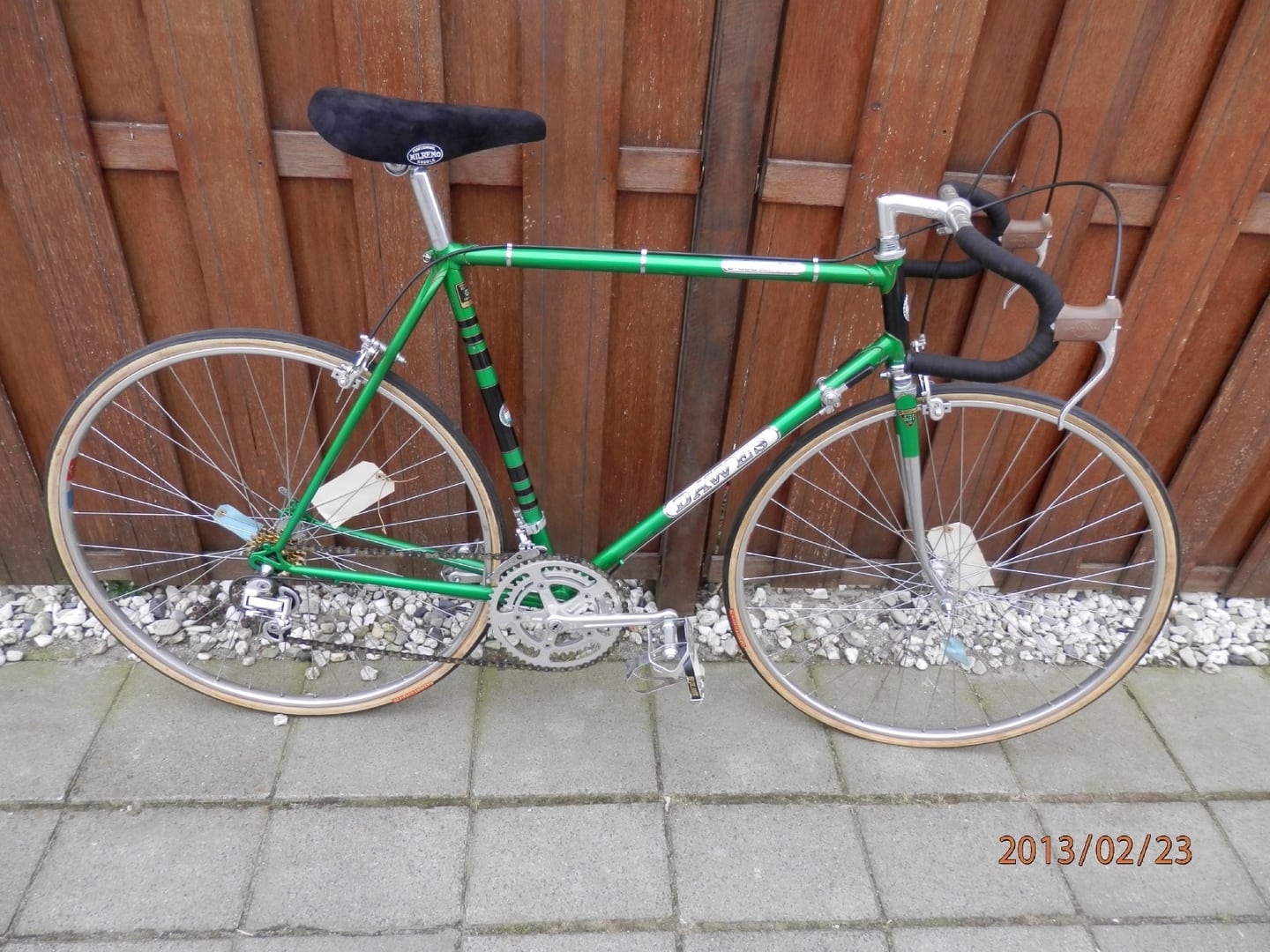 mine was more or less like this, but in blue with a slightly different curve to the forks. The bike above has the same chainset, brake levers and pedals as yours? Same as mine had too, along with the stem and a few other parts too. The chainset should have a date mark on it.

Edit; the braze-ons are identical to the Dawes mirage; top tube cable clips, band-on gear levers, cable housing under the BB for both FD and RD, nutted brakes, top eyes, etc all the same. Lugs are different though...?

This mirage has the same lugs as yours 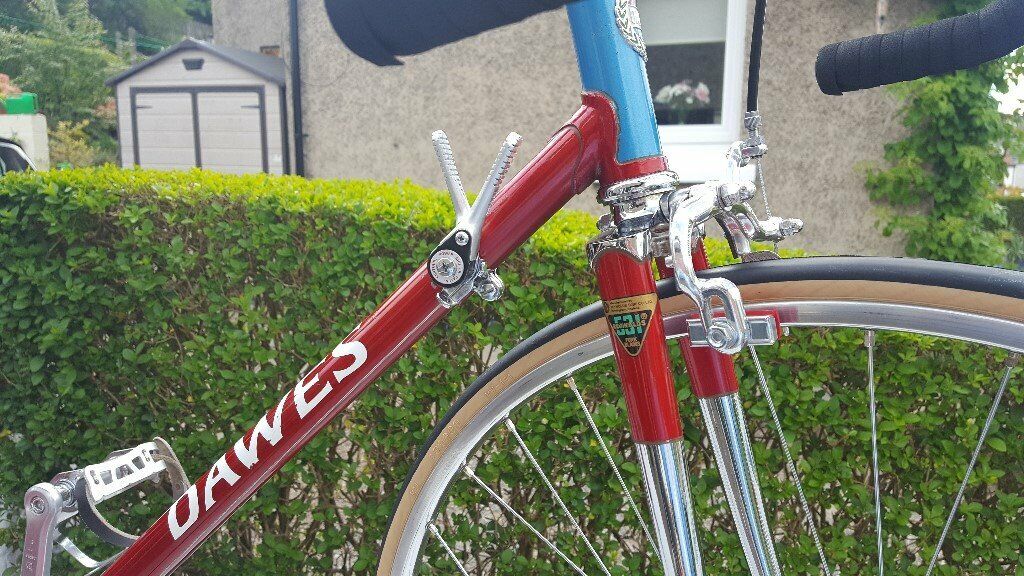 Thanks for your replies.
I can't see any sign of a outline of a sticker or name. But obviously if it has been resprayed then I guess I wouldn't see a name or logo. But that green Dawes does look really nice, but I don't know if I could get it looking that nice

But if it has been resprayed,I suppose it wouldn't be a crime to respray it again in a different colour,not feeling the salmon pink

I think you could make yours look pretty good;

Is there a frame number visible?
Perhaps that would help others with the identification.
You'll never know if you don't try it.
Top

There is a number on the bottom, under where the cable runs there is a 0. 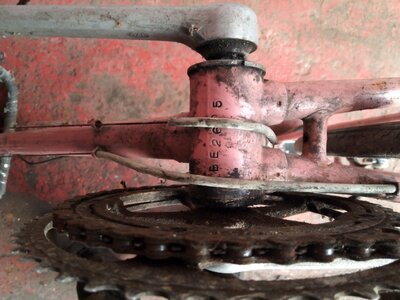 And I thought my bike was dirty

For a neglected bike it has surprisingly little rust.
Top

Yes, Dawes. My brother had an Imperial in the mid-eighties. Distinctive for its combination of short fork rake and mudguard eyes, just like your bike.
Current status report:
Back on two wheels in deepest Pastyland and loving every minute. Mission: to enjoy big, bad hills again.
Top

Looks to be a decent bike whatever it is. first tasks are clean and lubricate everything including cables, if the tyres still hold air go for a ride

EDIT: Looking at the frame number the format is correct for Dawes so that is probably correct.
Top

Great for any erotica you enter.
Top

my only comment is - do something with those brake cables, they hurt my eyes just looking at all that stuff waving about! And of course the brakes will work better with shorter cable runs