by NickWi
I've used their stuff on and off for the best part of thirty years. Quality was good, still is good, but the brand has move more adventure leisure than the full on outdoor kit it used to be. That's not a bad thing and whilst it may not suit some, you get what you pay for.

by Cunobelin
On my Arctic trips, I lived in the Fjallraven Luhkka cape.

Brilliantly warm and protective, but also shelters your camera equipment

by speedsixdave
I have had a fair bit of Rohan stuff over the years, with varying degrees of satisfaction. I like their breeches, which they don't do anymore, and their slim Newtown t-shirts, but some of their stuff is not very flattering.

What I do like is that they publish weights, pack size and drying times for all their clothes, which is extremely useful for the touring cyclist or traveller. I quite like the look of the Swrve trousers too but no weights, no pack sizes on their website.

by mattsccm
Still wearing a pair of their Bags I bought in 1982. A touch shrunk around the waist but otherwise functional. Their proper outdoor kit was great but to my mind their range is now just a slight variation on all the other items.

by speedsixdave
I like the pictures on the Swrve website with a bloke halfway up a ladder. It reminds me of a bit by possibly P.G. Wodehouse about a guy buying a suit after seeing an advert with a very stylish man climbing the steps of an omnibus, and then finding that the suit looked absolutely awful except when climbing the steps of an omnibus...

by pwa
I don't mind Rohan stuff but I do mind the prices for what, very often, is pretty ordinary clothing. Generally speaking you can get cheaper and better at the same time by going to Blacks to rummage through their sale items. Our nearest Rohan is next to our nearest Waitrose, which seems appropriate.

by simonineaston
Their garments aren't what they used to be... they're trading on a lot of historical brand-loyalty. However, I do remember that back when they came to the market, they were genuinely innovative and a breath of fresh air (npi) for outdoorsey folk, if you didn't mind paying the entry fee. Back when their Bags launched, there really weren't many viable alternatives to the ubiquitous denim jeans. Choice was limited to army surplus or running gear - remember Ron Hill's Tracksters? There was a gap for a garment that performed decently outside but which looked tidy enough to wear to a restaurant or museum. Rohan always was a brand aimed fairly & squarely at the well off.
Bags were a stroke of genius and cleverly marketed too - they were advertised in broadsheets and appealed to creative types and frequent travellers. Back in the early '80s, Rohan virtually became the uniform for middle-class media types, almost to the point of being a cliche. A whole range of cleverly designed and nicely made garments appeared, mostly based on the then new light close weave, poly-cotton fabrics, in unusual colour-ways and all with names - itself an unsual step. They were marketed as solutions to problems - almost as tools - rather than simple clothing, cleverly implying added value, to justify their high prices. Rohan, back then, came up with some of the ideas which are now sop for a lot of marketing.
See here for Sarah Howcroft's Flickr page, if you want a proper good wander down memory lane... Looking back at catalogs from 1980, say, I'm amused by garments with names like Trotters (!) Pampas & Striders and how they started this whole thing of 'the company story' as well as describing in detail their products' features & design points - even telling the reader how to wear them - all intended to make the potential buyer invest emotionally & intellectually in the products - made you think that they truly were the thinking person's outdoors wear...
You could say Rohan helped kick-start the whole outdoors garment industry, that's bloomed since the mid '80s, but that's all history. Nowadays of course, you can get perfectly adequate outdoors garments, the sort that would have delighted your typical outdoors enthusiast back in 1979, at your local discount store, for next to nothing...

by simonineaston
Check out those '80s colour-ways... 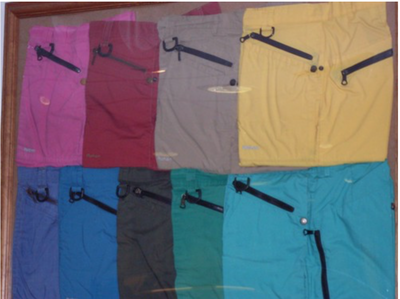 Stop It! There's one on fleabay in my size...

by speedsixdave
It was from my dad's Rohan catalogue in about 1986 that I first came across Moultons. They seemed an appropriate brand pairing at the time - both high-tech alternatives, both rather idiosyncratic, both quite expensive, both utterly derided by non-believers!

by simonineaston
Moulton, Brompton, Rohan, Apple, Hilleberg, Fjallraven, Citroen, Dyson et al - all text-book examples of modern design and marketing. The very elements that make them different enough to have success in the market are the things that the non-believers decry so vigorously. The interesting thing is how often these hugely successful and often expensive consumer durables are the product of one, maybe two, (Paul & Sarah Howcroft, Steves Jobs & Woz.) person's vision & effort. Vive la difference, say I! Lord save us from plain-vanilla, grey, mass-produced product... and from the UCI

And there's the rub.

To the extent that anything is durable, the market has limits. Rohan marketing has been the extension of fashion to the type of clothing previously thought of as durable.

by simonineaston
True - one must be selective. I have several pairs of Rohan trousers, inc those mentioned upthread, which have lasted well - decades. Bags, on the other hand, don't play nicely with Brooks leather and regularly wore through at the seat in spite of being double panelled, which is why I stopped buying them. As it was, they always were north of my budget at rrp, and so I only ever bought unpopular colours, discounted when they popped up in the sale, or via the shop at nearby Street Factory Village... in the context I used them, Bags never were good vfm, regardless of how clever, innovative or well-marketed they were! If their use was restricted to casual, non-stressed, they could last for ages, but put them into an environment where the fabric was subject to wear and tear, and they gave up - truly the mark of a fashion garment! But Great for the office, if you wanted that nice girl in the Personnel dept to mistake you for Bare Grills - grrrrrrr...!

by PH
I like Rohan stuff, my most cycled in trousers are their Troggings, and having just had a count up I also have; Two pairs of trousers, at least 5 years old and can't remember what they're called. A polo shirt that always comes touring with me because it's comfortable enough and I know it dries overnight. A softshell jacket which is casual enough to wear anywhere yet surprisingly good on the bike. A T shirt that isn't a favourite, but gets plenty of wear. I'm glad they've moved away from the dedicated outdoors kit, I need some element of that, but for my use it doesn't have to be that technical. I don't doubt the point above that you can probably find similar cheaper, but having never been disappointed with Rohan I'm inclined to look there first. I've only worn a couple of things out and I've considered them to have lasted well. Plus, there's not many suppliers who offer the same level of information about those things that are important to me, pack size, weight, drying time, UV protection. I only ever buy at sale prices, but am not an impulse buyer, I own more than enough stuff already, if I buy something it's usually as a replacement.
All times are UTC
Page 2 of 4
Powered by phpBB® Forum Software © phpBB Limited
https://www.phpbb.com/