Memories of the Dawes Galaxy

There is also a Dawes Galaxy memorabilia thread on yacf at the moment.
Top

I was riding my laden Galaxy with a nice tail wind. I rested the heels of my hands carelessly on the tops. I hit an unseen pothole and my hands shot forwards off the bars. The bike continued steadily on its way, without my guidance.
Top

What's the maximum width of tyre could you get in that era Galaxy do you think please?
I met a bloke whilst out on friday who I think of as 'Galaxy Dave' to differentiate him from another Dave I ride with !
I'd forgotten his face but remembered the bike......

I always used 700x28, never tried 'owt else
Brompton, Condor Heritage, creaky joints and thinning white (formerly grey) hair
""You know you're getting old when it's easier to ride a bike than to get on and off it" - quote from observant jogger !
Top

Thanks for the reply. I'd got it in my head that they would take a wider tyre than 'standard' tourers of that era ('90's).
Top

BITD galaxies with 27" wheels came with 27 x 1-1/4" tyres. 32-630 size. When they started coming with 622 size rims, 32-622 size tyres were fitted instead. Clearances may have varied a little from year to year, but I don't remember seeing galaxies fitted with 38mm tyres or anything like that. I've got a super galaxy from about 1988 and (as is common with many british touring bike designs) the limiting factor for larger tyres is the chainstay clearance.

BITD 32mm tyres were considered a bit wide and slow. These days you can buy some of the fastest tyres in 32mm width; how times change!

Thanks Brucey most informative as usual.
Top

I always ran on 32's, but the 'something Gold labels' were always a lot thinner 32 than Michelins World tour which was a huge fat 32. Ironically their World Tours had a job touring round the county let alone the world.
Cheers
J Bro
Top

I have Super Galaxy that I inherited from a friend who had an urgent N+1 problem. It's probably a 2004 or 2005 model (like the one CJ reviewed in Cycle) bizarrely bought from Oxfam (I was the one who spied it in the window).

Me mate gave it a real hammering including the following interesting mechanicals:
1. Broke a chain on a one way system in Newcastle firing the chain onto the road behind
2. Stripped the bottle bracket thread so the BB is epoxied in (on its second BB)

He also rode London Edinburgh London on it.

I now run it as a gravel bike which is quite fun. It is the highest number of Reynolds tubing that I have but the heaviest bike
"Marriage is a wonderful invention; but then again so is the bicycle puncture repair kit." - Billy Connolly
Top

What's the maximum width of tyre could you get in that era Galaxy do you think please?
I met a bloke whilst out on friday who I think of as 'Galaxy Dave' to differentiate him from another Dave I ride with !
I'd forgotten his face but remembered the bike......

I had 35mm Schwalbe Marathons on mine with full mudgaurds, mine dates from the early 90s I'm fairly sure although I did get it 2nd hand through a local bike project I was working at at the time so not 100% sure. It had an MTB style Shimano Deore group set right down to the low profile cantis.
Top

Many thanks again for all the info. Suggestions of other sources like FB groups is really handy. The funny stories of breakdowns and different uses the bikes have been put to down the years also. Some great info on the technical side on spec. and stories of tours and rides short and long e.g. London , Edinburgh, London, and a superb insight into the history of the bike.

My wife had a Galaxy before we met. She called it Diana! It took her many places home and abroad.
I got mine 2nd hand in about 2014 and it is the bike that has taken me the highest (1585m Larrou in Pyrenees) and the furthest in one day (126 miles Dunwich Dynamo) Its been a very reliable, practical and comfortable bike. Its currently set up single speed and flat ish bars for commuting and shopping as most of my touring is now off-road or on / off mix. A gravel bike is also on the way (N+1). I guess my switch is part of the general trend towards off-road or on/off mix in cycle touring which has contributed to the decline in popularity of bikes like the Galaxy. Cycle touring generally is alive and well though, I reckon.
Top

roland4130 wrote:Many thanks again for all the info.

and stories of tours and rides short and long e.g. London , Edinburgh, London, and a superb insight into the history of the bike.

In about 1983 or 1984 a local bike shop's lease on a large building came to an end and they had a massive clearance sale. They had a lot of NOS bikes and several of my friends got themselves a bargain. IIRC amongst these was a Raleigh record ace (about £150), an Elswick 'stag' (about £115) and a early Dawes Super Galaxy (about £125). The Super Gal was an early version of this model (from about 1979) and this particular one was in a small size and it was built pretty light.

IIRC the spec was

The whole thing weighed about 27 lbs and was pretty nice to ride. [Amongst other things the gearset weighed less and worked better than the campag stuff I had on my posh road bike at the time...

] However it wasn't a big load lugger; it was built a bit too light for that. Around the same time that Super gal was built, they also offered the same spec but with a triple chainset rather than a double.

The bike above has a very similar spec but has a more basic frame (531DB main tubes only I think), a non-531 fork, a front carrier and a triple chainset. It is otherwise very similar to my friend's bike.

For one or two years in the mid 1980s the galaxy model appeared with side pull brakes on it, instead of centre pulls. This was a big step backwards, IMHO. They redeemed themselves by fitting cantilever brakes on most subsequent Galaxy and super galaxy models.

IMHO some of the early (~pre 1980) super galaxy models (with a 531 fork, not always seen) were a really nice ride; considering it was more a mass-produced bike the ride wasn't far off that of many posher lightweight bikes. No so good for a full camping load perhaps but for the other 50 weeks of the year a very pleasant ride. It is very easy to lose sight of just how nicely bikes of this sort can ride; "more racehorse than carthorse" IMHO. Many later steel-framed touring bikes (especially if they have disc brakes and a steel fork) feel more carthorse than racehorse; a different thing altogether.

Mine was a 1985 Galaxy in bronze which I bought second-hand from Brixton Cycles in 1986. It found itself on a plane to Malaga that year and on the roof rack the next year to France, Switzerland and Germany. It was a ten speed - great bike but despite its guest appearances in foreign countries it didn't actually do many miles until it was stolen from my workplace the following year.

Ten years later I bought a brand new Super Galaxy followed by a Galaxy Twin and later the Horizon I still have. I think the Super Galaxy was utterly superb: it was my first experience of bar-end shifters, a Brooks B17 and 24 speed gears. I just remember the accomplished ease with which it swallowed camping loads, breezed up the A38 and wafted through my four-panniered overnight work trips.

This bike did put in the miles and it was the final confirmation that you could have a real touring bike that could not only carry the weight (it had a 22T chainring) but cruised elegantly on good roads. It saw duty all over southern England. It was the combination of low gears, carrying capacity and all-weather performance that convinced me that this upgraded Galaxy had hit the sweet spot in terms of what a bike can really do. It was the start of turning my back on the motor car.

It saddens me a little that the shift to cycle trails, off-road and roof-rack cycling (I understand why) means that some people might have missed out on experiencing what it means to conquer distance, arrive at faraway towns, crest the hills on the far horizon and carry with you what you need to stay somewhere overnight. I think the Galaxy really epitomises that because it never relinquishes its right to be on the road while never demanding the most pristine of surfaces. It's a bike that belongs to the topography of the twentieth century - maybe that's why it has finally faced its own demise.
When the pestilence strikes from the East, go far and breathe the cold air deeply. Ignore the sage, stay not indoors. Ho Ri Zon 12th Century Chinese philosopher
Top

I bought a Galaxy frame from St John Street Cycles when they had a batch greatly reduced. It was a nice metallic green (I think this was the Super Galaxy colour). This would have been about 1986.
I built it up into a spec to suit me - and it took me into the world of Audax across the UK, France and Belgium, as well as some gentle touring when introducing my son to the mystery of cycling.
It was supplemented by a Ride-to-Work scheme purchase of a Specialised Tricross Sport.
A couple of years ago I stripped it down and had the frame resprayed and built it back up again as my 'summer / dry bike'.
I haven't got any photos of it in the original colour but here it is last year, 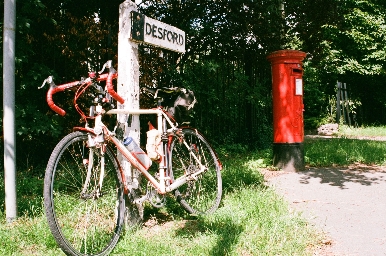 Leicester; Riding my Hetchins since 1971; Audaxing on my Dawes; Riding to work on a Decathlon Hoprider
Top
Post Reply
60 posts