I was talking to a chap in Eccleston today (next to Wiggo's golden letter box).
He was riding an '80's or thereabouts Coventry Eagle, I was on my British Eagle and got into a conversation about his
bike, it being a forerunner of mine. He said it came to him from Lincolnshire, so possibly a Brigg, Linc's - built machine.
He brought the subject around to the head badge of his bike and said he thought it had something to do with the French Imperial Eagle. I said I'd do a bit of an internet search for him, hence the post. 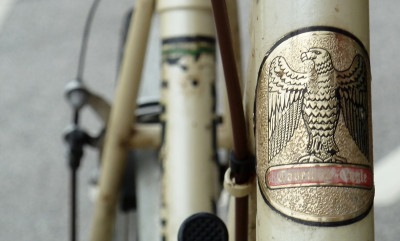 It's a stylised eagle and indeed is similar to the French Eagle, but it's head is facing in the opposite direction.
I see from a picture of earlier Coventry Eagles they used a more conventional representation of the bird in flight as a badge.
https://en.wikipedia.org/wiki/French_Imperial_Eagle
Bit of the firm's history here; https://www.gracesguide.co.uk/Coventry- ... d_Motor_Co
Does anyone know anything about it's origins, thanks ?
Nu-Fogey.
Top

Off the back of your post, I did a little internet searching myself, taking the approach that the acquisition of Falcon Cycles might have precipitated an amalgamation of stylised bird of prey to afford some sort of homogenisation of brand identity but, in my findings, the "Falcon" falcon was stylised very similar to the earlier Coventry eagle - in flight and about to strike. So that theory went out of the window. I didn't make any association with the head badge eagle and the French/Napoleonic eagle other than they're both heraldic in style. My thoughts on it now is that it was just an arbitrary restyling of the head badge from a "natural" eagle to a "heraldic" eagle. All that is said without any actual knowledge, just a guess.
Disclaimer: Treat what I say with caution and if possible, wait for someone with more knowledge and experience to contribute.

Thanks Freiston, you'd be in the right location to be interested !
I was looking at some Coventry Eagles on ebay today and found one with a twin-headed 'Heraldic Style' eagle. 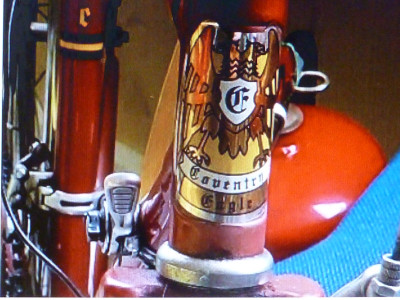 There was another with a similar naturalistic graphic to my British Eagle one, they may possibly be stock bits of artwork.

I also found this catalogue which has current relevance if you read the signs behind the bikes ! 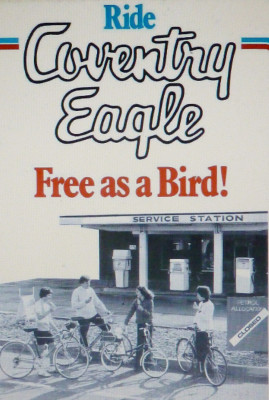 The Eagle in flight badge on my British Eagle rang a bell and I found a similar one being used on Wester Ross bikes. Different flight poses, but very similar style.
Thanks again for the reply, like you say it's a bit of a guessing game.
Last edited by colin54 on 2 Oct 2021, 8:02am, edited 1 time in total.
Nu-Fogey.
Top

The more you look, the less you know; ebay Coventry Eagle headtube badges:- 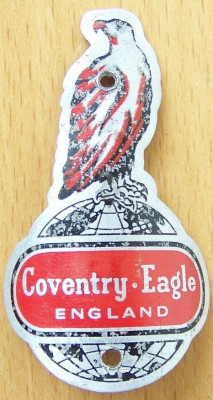 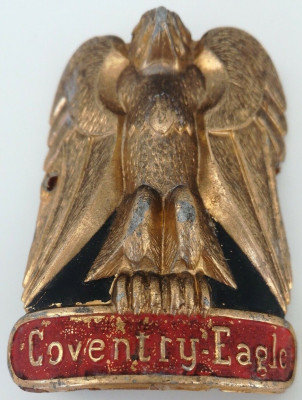 British Eagles:-
My British Eagle Touristique's badge, some of the green has disappeared from the sticker. 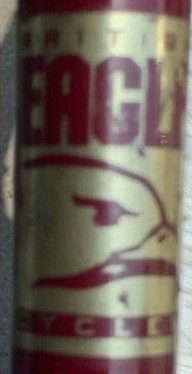 What a shame they stopped making badges like that lovely cast one, I'm tempted to buy one and glue it on the seat tube of my bike, incorrect though it would be, a little nod to the past.
Nu-Fogey.
Top

and another different style

There seem to be a lot of these simplified ones of heads only with different coloured backgrounds on later bikes.

I saw this ad on ebay with this badge (described as a Coventry Eagle motor cycle badge) , pictured next to a U.S. coin, the eagle on the coin looks more like the one pictured in my original query, a strange coincidence that the advertiser should put that particular coin in the ad next to the badge; I don't suppose the U.S. eagle has any more relation to the Coventry Eagle badge than the French eagle, but at least it's looking in the right direction (left !). 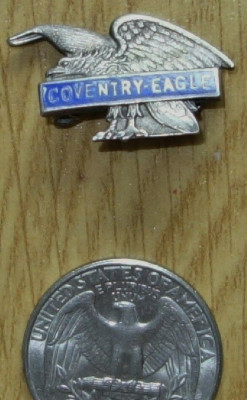 File all the above in the drawer marked 'arcane knowledge', it was fun looking for it tho' ( for me anyway).
Nu-Fogey.
Top
Post Reply
5 posts • Page 1 of 1