Big T wrote:Mine was an Aerospace, come to think of it. I bought it in 1979 for the princely sum of £89, to use as a winter/training/touring bike. It lasted about 3 years before the frame broke and I transferred the bits onto a Falcon frame.


Did you get my private message regarding the chainset?
Please get in touch.
Top

GrahamG wrote:I remember chatting to my LBS mechanic about them after bringing a frame I got given for free. "Every bloody crook in the business was involved with that company at some point or other" was the response!


Any more details on the "crooks" side of things? Sounds interesting.
Top

I had the cromo framed Aerospace Deore 18AX fast tourer. The frame was brilliant, out handled full race machines. Unfortunately the early Deore groupset was total rubbish. I rebuilt the entire machine in Campag within 6 months. The frame died a couple of years ago, fatigue crack across the downtube gearlever braze-ons.
If at first you don't succeed - cheat!!
Top

I've got a complete visount for sale if anyone out there is interested.I think it is a mid - late 70's model though I'm not sure(it is stamped 72 at the top of the seat tube)It has 12 speed Shimano Altus rear mec,Shimano 600 front mec,SR stem,SR cranks,Suntour GS rear drop outs,27 inch alloy wheels with stainless spokes ,rear shimano hub,quick release Weinmann brakes.
It looks and rides ok but would be ideal for a full restoration or upgrade,
I can send photos if anyone wants to see it
Top

I have an early Viscount, think its a 71 or 72 model. Its been converted to fixed gear, rides quite nice but I did have a few issues with it. Particulaly the BB and chainline. I think it must have been updated at some point in its life as it doesnt have the pressed bearing BB or the Deathfork.
Last edited by quiksilver on 14 Apr 2009, 2:57pm, edited 1 time in total.
Top

depends which model. Only the aerospace series had the pressed BB and death fork.
Top

Soon as I can work out how to post photos I will post one of my Viscount.
Top

quiksilver wrote:I have an early Viscount, think its a 71 or 72 model. Its been converted to fixed gear, rides quite nice but I did have a few issues with it. Particulaly the BB and chainline. I think it must have been updated at some point in its life as it doesn't have the pressed bearing BB or the Deathfork.

Hope the stuff below is useful.
Born out of the ashes of the failed company Lambert, Viscount commenced production in 1974. In the UK it was not until 1976 that Viscount first produced a bike, the "Aerospace Victor" with a part lugged but mainly fillet brazed frame. In the US 1976 saw the introduction of the "Sebring" model which had a fully lugged frame albeit one that was made in Taiwan. All Viscounts before these two had the "Aerospace" frame so named because of the special steel tubing it was constructed from which was the same as that used for aircraft fuselages. These Aerospace frames were built on the same jigs as the Lambert ones using the same tubing. They are easy to recognize because the tubes are joined with a fillet braze (no lugs) and the bottom bracket shell has no threads. The crank was bolted to a steel spindle which turned in two sealed bearings. These pressed in bearings were held captive by circlips which sat in machined grooves on the bottom bracket spindle. Incidentally, this simple engineering solution was used by Klein on many of their earlier frames. The only difference was that Klein used Loctite rather than circlips!!
If your frame has a threaded bottom bracket shell then it is either a post 1977 Viscount jobbie, made at the Potters Bar factory or a 1976 onwards re imported Taiwanese frame off a US Sebring! Between 1974 and 1977 Viscounts were made at the former Lambert factory in Bilston. For me, these "Aerospace" Viscounts are the ones to have. The frames show some real brazing craftsmanship (if you don't believe me have a go at low temperature fillet brazing!) and the rest of the bike had some nice examples of innovative engineering carried over - but, crucially, in a way that worked - from Lambert's engineers.
As for the "death fork", where do we start? Viscount Aerospace bikes were fitted with a fork that was similar to the Lambert fork but crucially it was redesigned and as a consequence held together in a much stronger way than its predecessor. Breakages were VERY rare. This is not what you will have read elsewhere but it is true. The companies own fork recall statistics show that less than 1% of all forks sold actually broke. And that's from a total sale of over 30,000 bikes: a large enough number to be statistically significant. I have 3 "death forks" one of which has done 60,000 miles and been raced in cyclocross championships. They have all been crashed big time yet all are in one very solid piece. The internet is notorious for developing myths or at the very least feeding and nurturing minor and quite common problems into a global phenomenon. Its funny really. A global "death fork" recall for Cervelo seems to have gone by with barely a whimper.
Don't know about you but I have seen plenty of broken 531 frame tubes in my time yet there has never been a recall on that stuff. Quite right too. The reality of metals (and carbon too!) is that sometimes s*** happens. Check out the scary websites full of images of broken Campy, Shimano, Mavic, Cervelo, etc. stuff if you are not convinced.
Look forwards to seeing your photo soon. Here is one of my Viscounts, a 1977 Aerospace Pro: 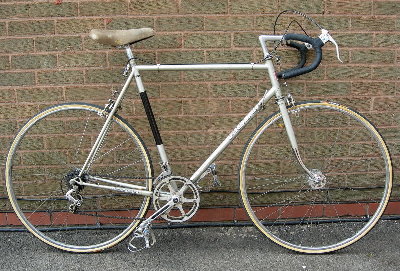 I used to work on the assembly line at Trusty Viscount in the early 80s in Potters Bar. (my part in their downfall??) I remember one bloke who regularly every Monday morning had to be retrained in how to attach brake calipers. He tended to attach them upside down. My aim in joining the company was to learn how to build frames but alas I never progressed further than the prime position on the assembly line viz derailleur adjustment. I am sure somewhere in a shed out the back someone was building a few Aerospace frames but the main products were cheap 10 speeds and kids bikes. This was a bad time for bike manufacturers in this country I think. Mountain bikes were still just a Californian cottage industry.
Top

i take the point that sometimes reputations are based on hearsay and it is good to know that forks very rarely broke. But the "death fork" claim was in existence long before the internet "incorrectly" spread and bad news. Going back to the 70's when I had my Sebring and quite a few CTCers had aerospace models, the death fork reputation was in existence and owners were constantly reminded of this. Indeed one contributor above states that he soon replaced his fork. So, whilst the reputation may be unfounded (and I never saw a fork break either, but I did see several seat tube breaks), I'm always mindful that theres no smoke without a fire. It would be interesting to know how this reputation originated. Might it be possible that the frame was so advanced, and at a good price point, that the industry competition stirred it up? I remember the main players in the industry at that time were Raleigh, viking, Falcon and viscount. Out of those, I chose the viscount cos it was lighter than the others and was specced with alloy shimano components.
Top

I'm sure I remember reading somewhere that Viscounts were in production before the aerospace frame and that thier frames were lugged but were built up by another company. The original owner of mine told me it was a Viscount but maybe its not. Mine has a threaded BB, no death fork and a lugged frame. The frame is a kind of toffee apple red colour.
Top

This is mine before conversion. 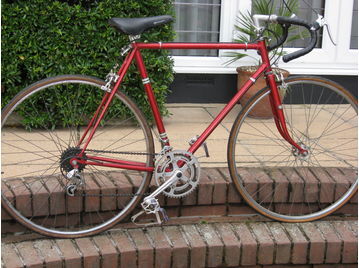