by viscountamble
I have never inserted an image before so have added as an attachment. It is a Shimano with YK stamped on it. Internal diameter Slot to slot 20.27mm. I hope that helps!

by drossall
Should take a Shimano freewheel remover, then. That's Shimano's own, or any of the various ones made by others, e.g. Park, which would be the other I'd consider.

Available from any decent LBS. Just in case you don't realise, there are loads of different fittings, so it doesn't matter who makes the remover, but it does matter that you get Shimano fitting.

Or tell us what area you live in, and someone may lend one.

by viscountamble
Hiya. Thanks for the info. I live in Amble, Northumberland, NE65 0NF, if thats any help. I would be grateful if a learned friend could help with loan of correct tool!

The 6000RS bearings might be turning in the hub. They both seem to turn smoothly to finger touch. In any case i need to get at the bearing on the drive side and administer a little
locktite.
Cheers!

by Brucey
following my "don't shoot the messenger" post from 2015 (

) about MkIII 'death forks' also being prone to failure, a fellow forum member has asked for some photos.

As a refresher the three versions were constructed thusly 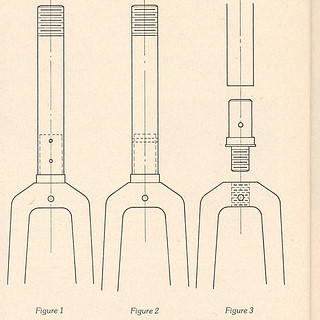 in the UK it is widely held that the MkIII fork is 'safe' whereas in the USA it appears that every aluminium fork was recalled. Some folk say "I'm not worried, only ~30 of the forks broke (from 30000) BITD'. Well there have been many more breakages since then, even amongst the few left in circulation; IMHO using one is a bit like playing Russian roulette.


Anyway this MKIII fork came to me via an LBS who know I have an interest in these things. Amazingly the owner survived the breakage without serious injury; I have no idea how. The screw-threaded adaptor piece has clearly suffered a fatigue failure, with the crack growing from the back of the fork towards the front, meaning that the crack most likely propagated in normal use, not during braking or by hitting something. The photos don't show this very clearly, since (amongst other things) the thing has been kicking around in my workshop for three years, seeing service as an impromptu wheelbuilding jig. Thus the fracture face is now dirty and corroded. 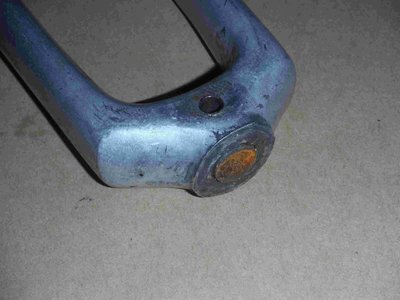 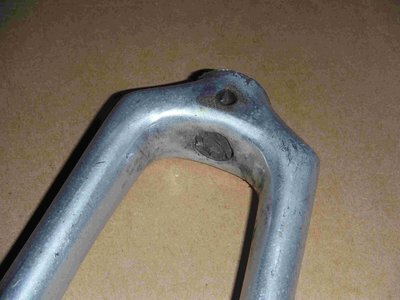 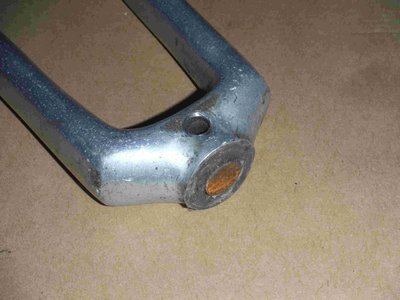 The part that broke is only ~16mm ( ~5/8") dia. It looks like the same basic fork casting was used for all three versions; IMHO it would have been better if they had used a more substantial casting for the final version, with a (lifed) hollow bolt (of larger diameter) with a plain shank through the fork crown from the underside. Maybe these forks can be usefully reengineered in this way.

But anyway as it is, even the MkIII fork is seriously badly designed/manufactured and is likely to fail. Part of the problem may be that the flange on the adaptor piece ought to help mitigate the bending loads in the threaded part, but that will vary with fit, tightness, and what kind of threadlocking compound is used. The fork above has traces of some gunge on it, but it isn't very stiff; it could be that there was a layer in the gap that oozed out over time and left the plug seeing all the bending loads; I don't know.

The other thing is that the only reason you would want a fork like this in the first place is if it is lightweight; however this fork isn't even that. The lower section alone weighs ~620g; compare that with a complete 531 fork (700-750g) which is basically completely reliable.

Maybe this fork should be renamed the 'Death Wish Fork' because it seems folk are still choosing to ride them even in the knowledge that they can fail catastrophically, without any warning.

Not sure if anybody can help or not.... you may remember a few years back I managed to source a baby Viscount Sprint.

Well it's resto is underway but what I really need is either a supplier of decals... which I'm not hopeful of or a good hi-res image of a sprint top bar logo.

Could any of you guys or gals on here take a hi-res image and send across to me?

by Brucey
re freewheel remover; IIRC that is the older shimano fitting. More recent (i.e. within the last 35 years) shimano freewheels use a fitting with a shallower spline than that. The 'newer' remover has a larger minor diameter and won't fit that spline.

I just bought this Viscount 600 Ex frame, couldn't find too much information about the bike. From what I vaguely understood there would have been several models 400, 600ex and 600ax which designated the equipment of the bike, apparently there was a lot of 600ex in aerospace tubing. Mine does not looks like it is, it is definitely not aerospace tubing and it's not seamless lugs. What I can't find in my researches is a Viscount frame with the same detailing on the fork and the slotted bottom bracket.

The tubes are Viscount Chrome Molybdenum tubing, bare frame weight 2120g, fork 530g making a total of 2650g for the whole. No marking except for EX111 on the rear dropout.

If anyone has information on the frame I am very interested, not sure what to do with this frame yet ! 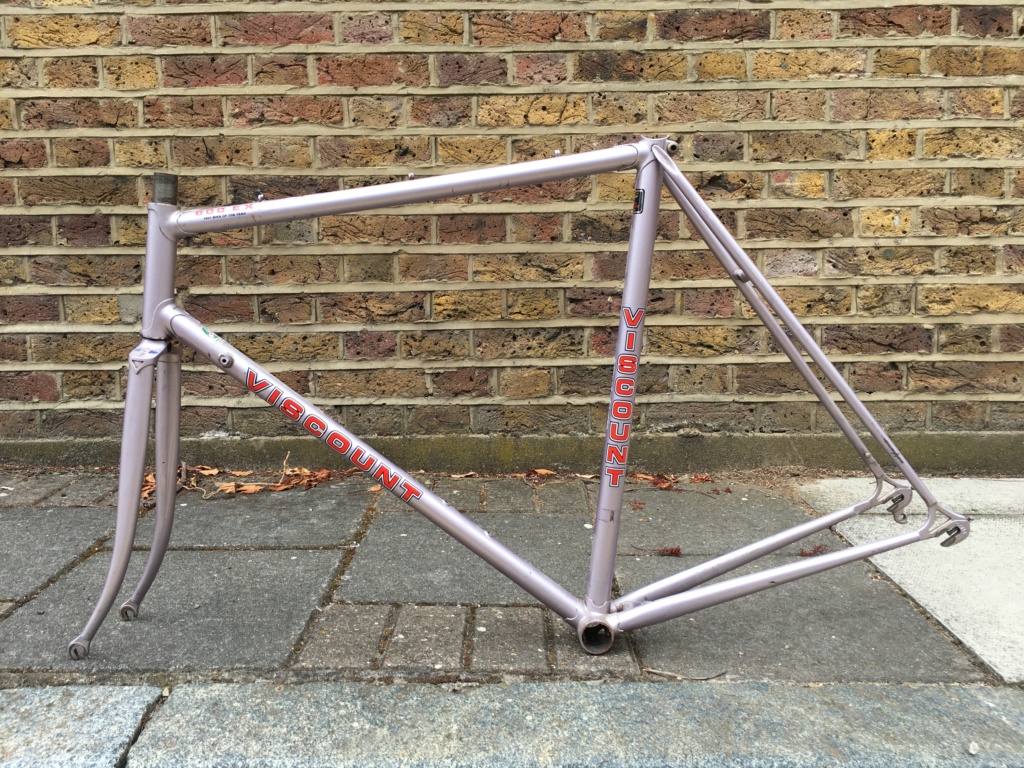 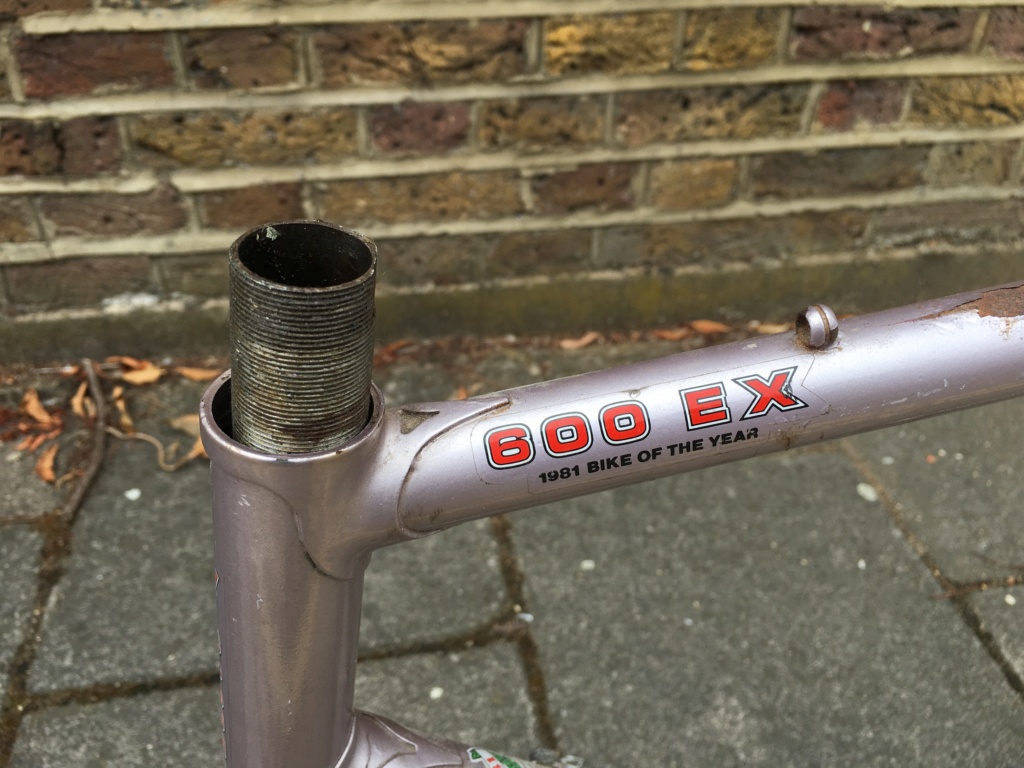 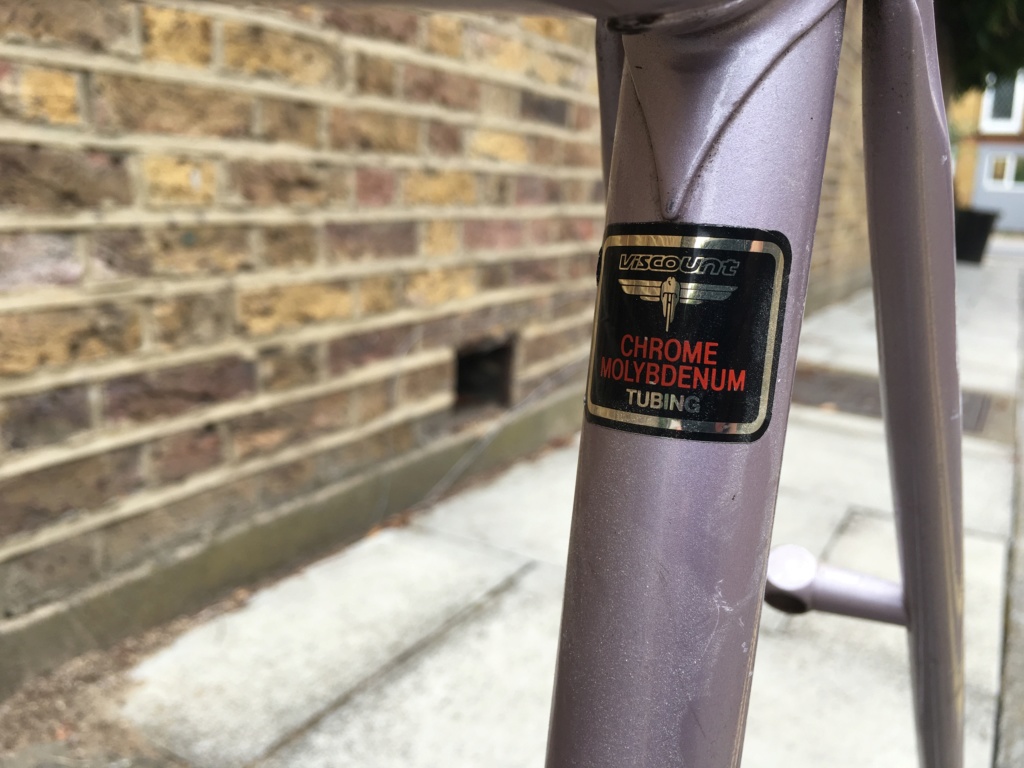 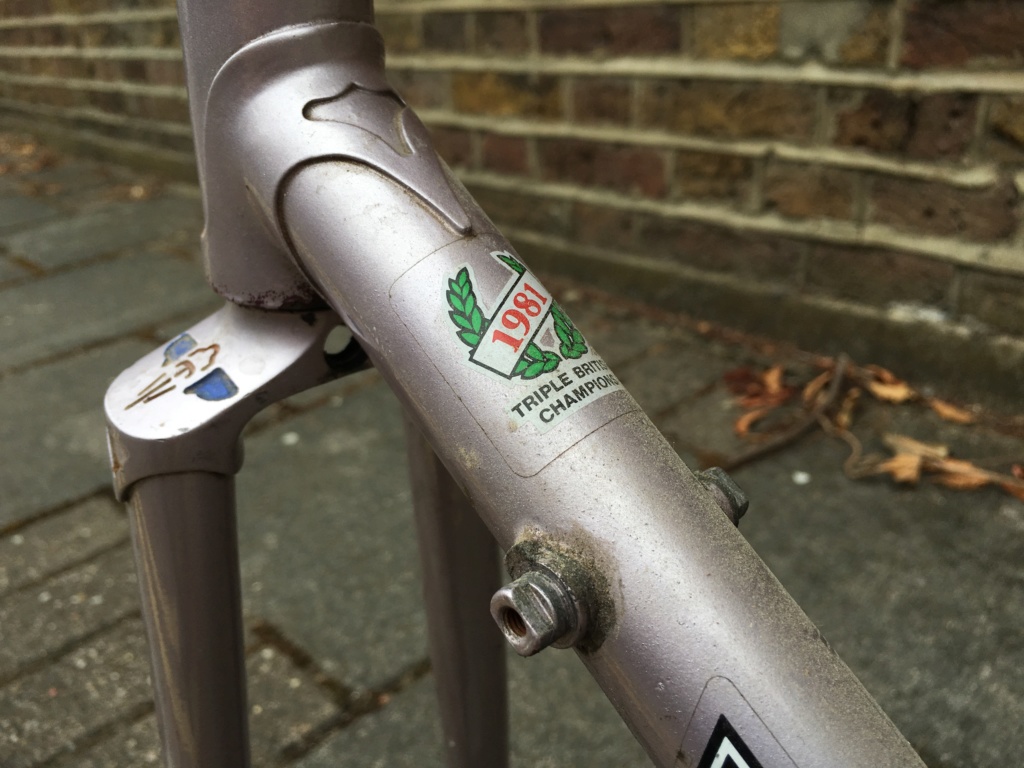 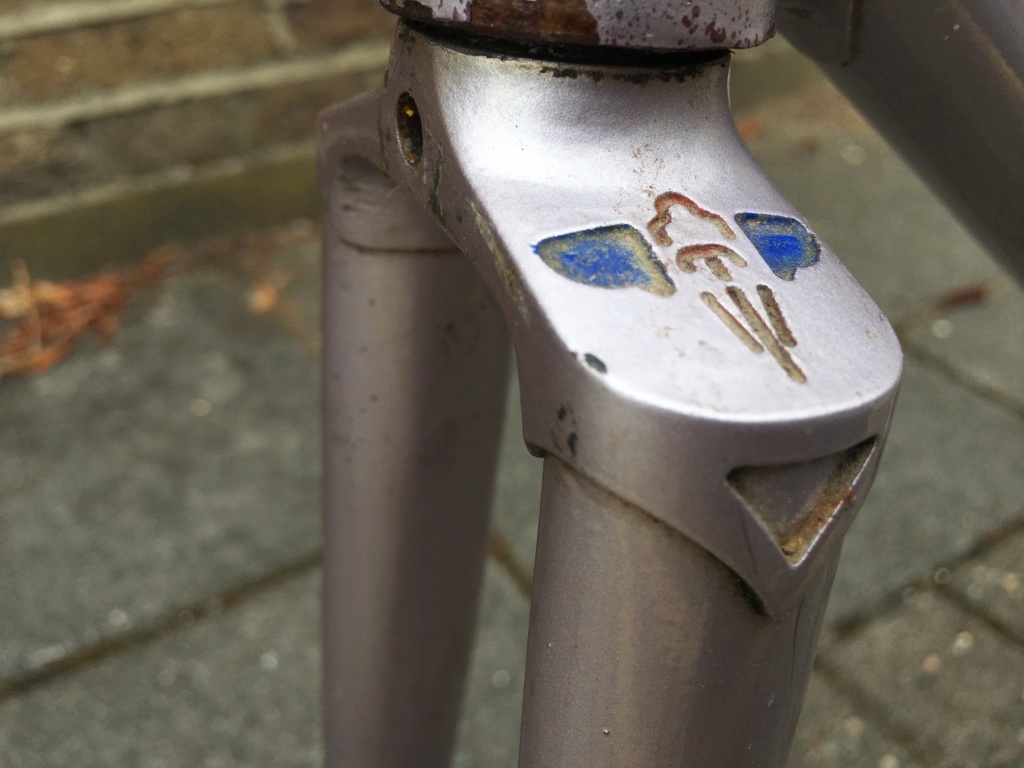 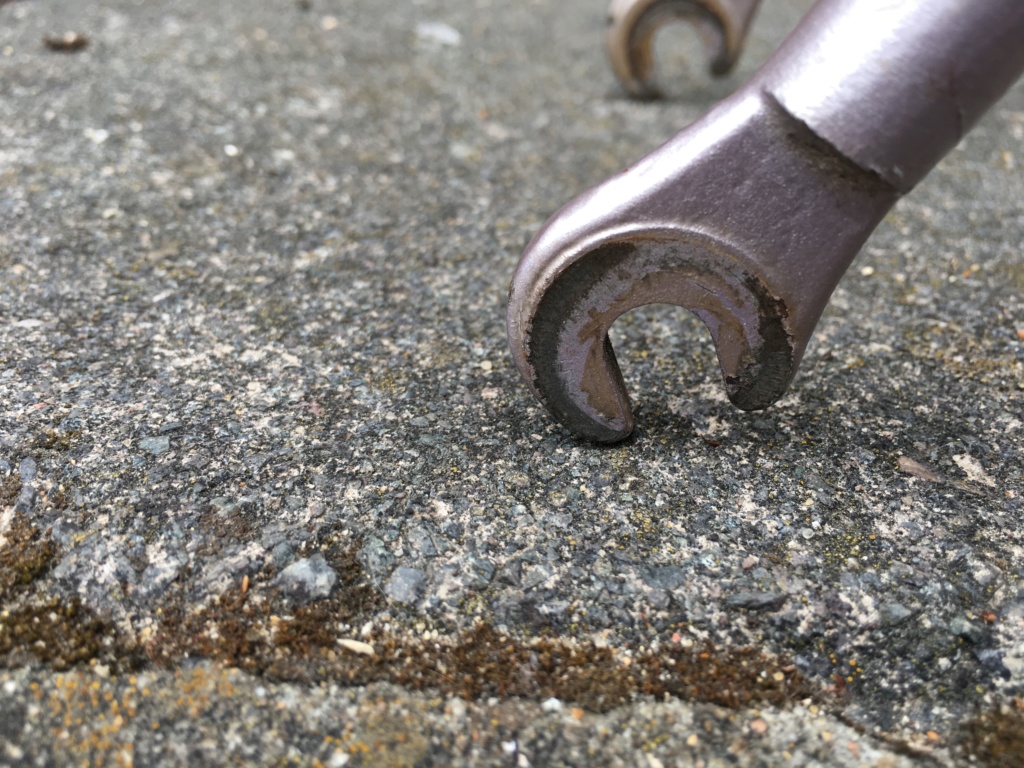 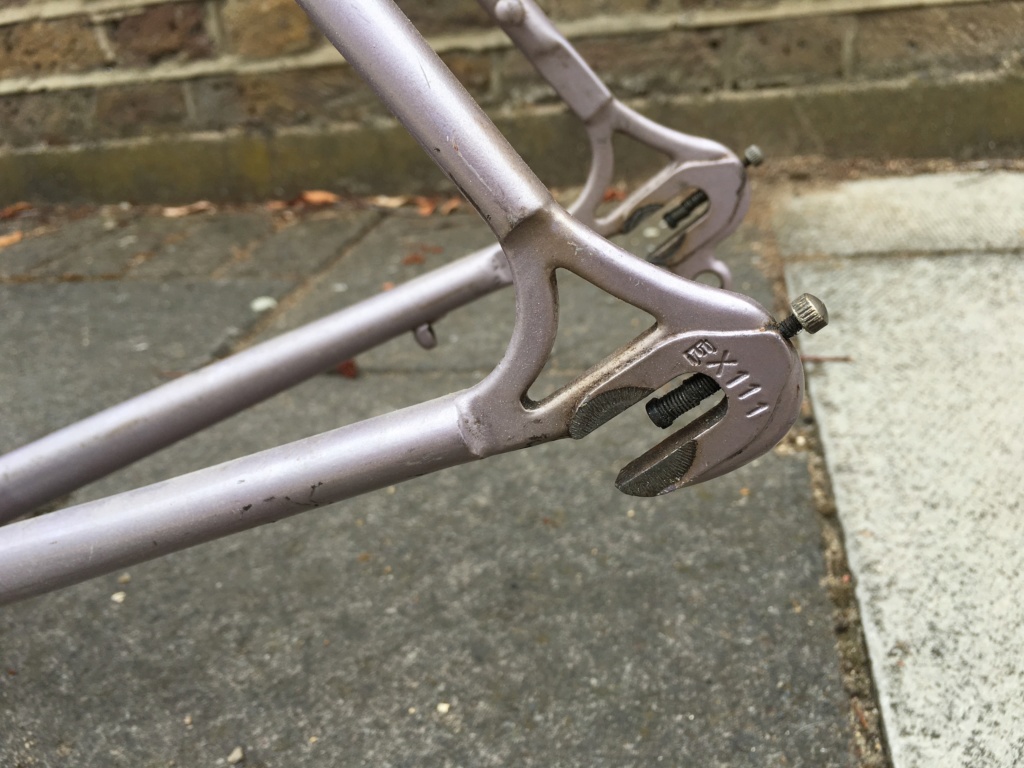 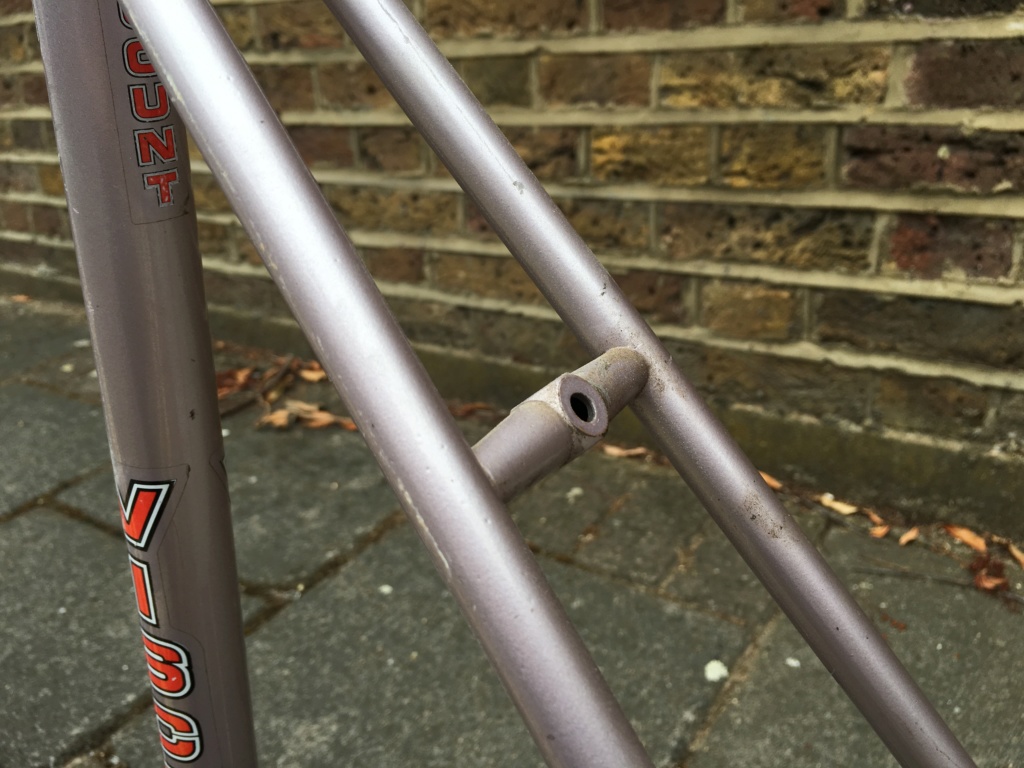 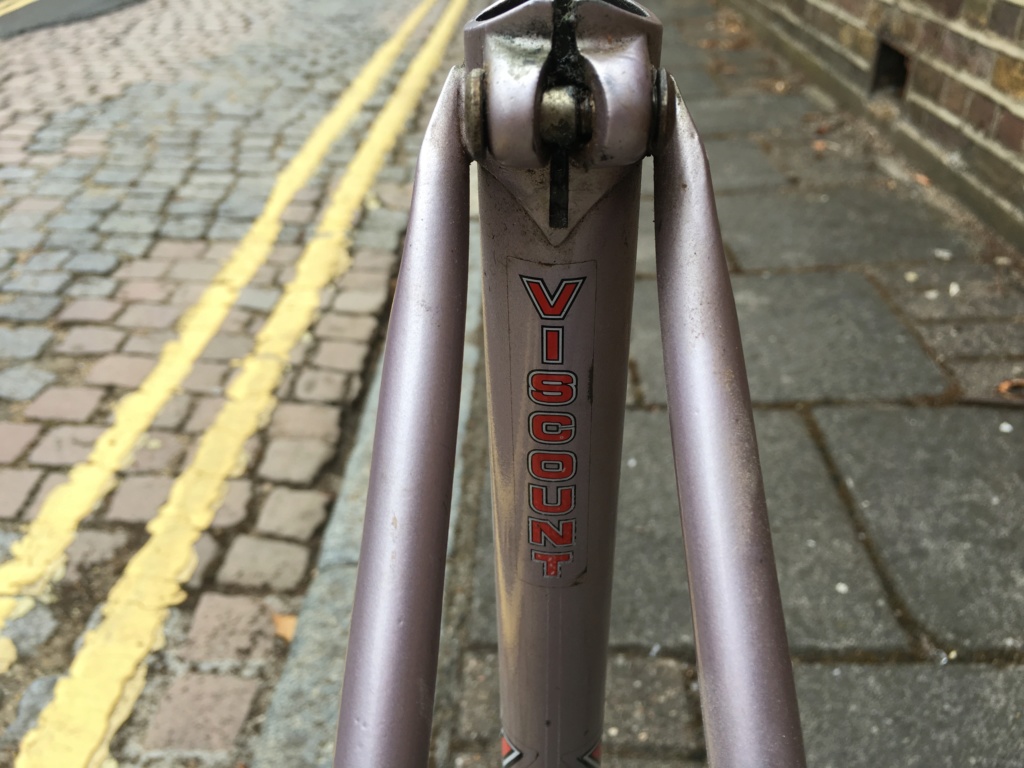 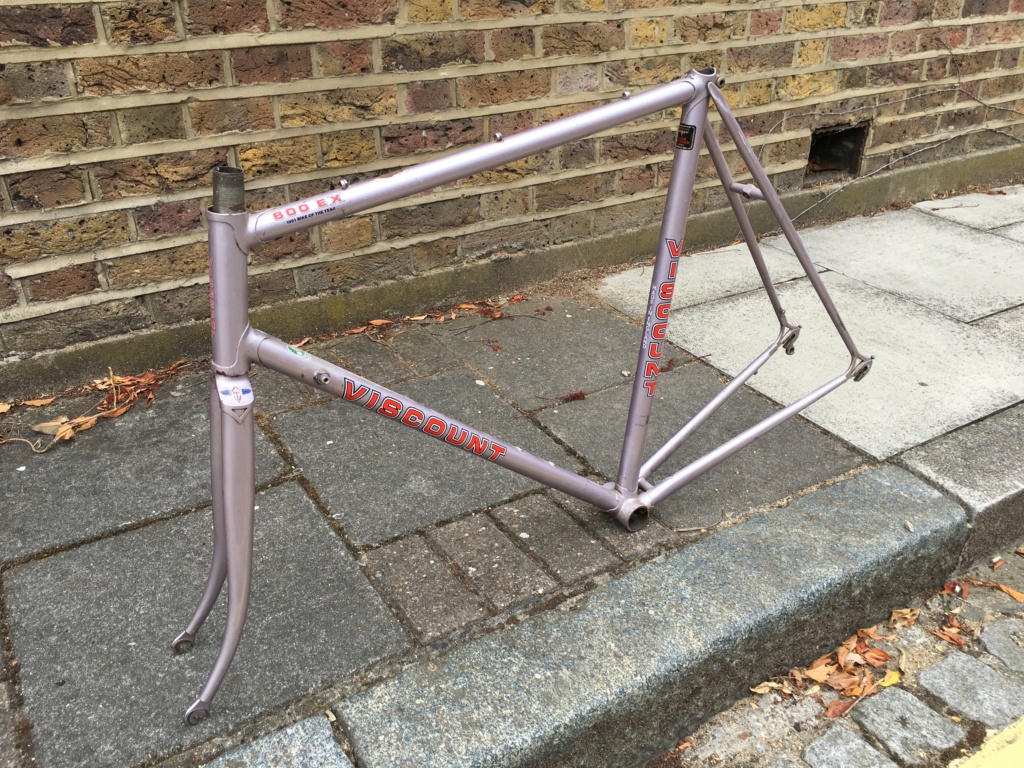 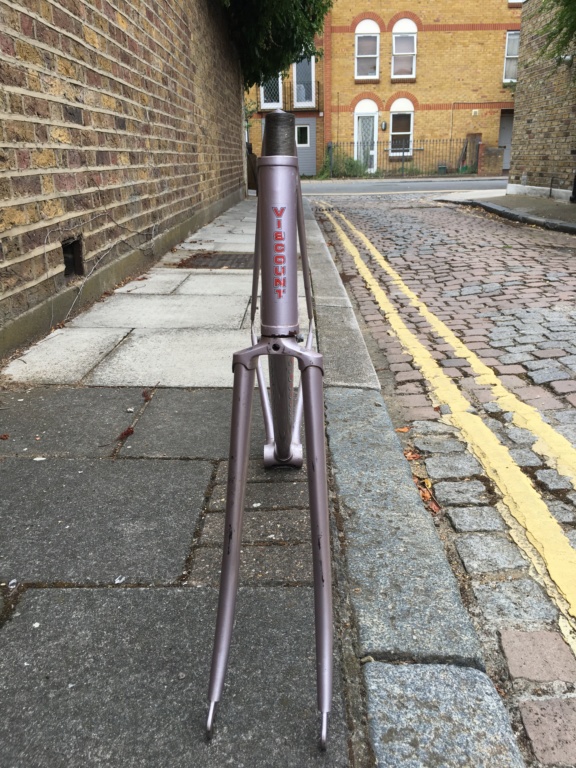 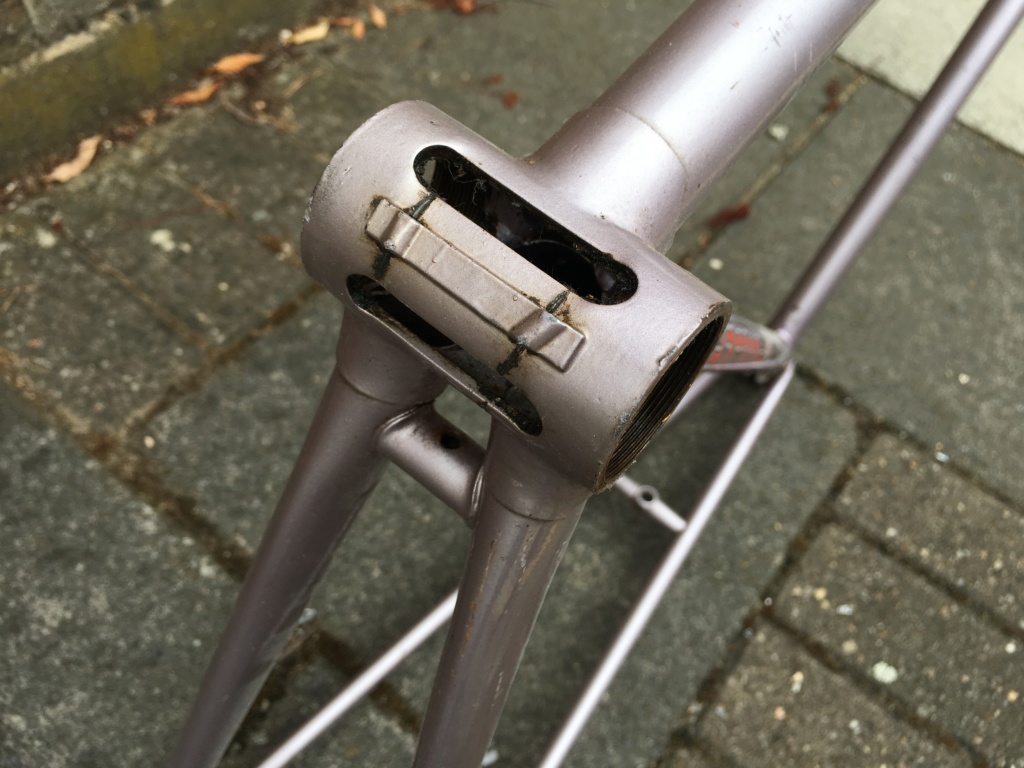 by sprockit
I've only seen the Viscount fork crown detailing on a couple of pictures here and there, likewise with the slotted BB shell. These two features, along with the rear derailleur mounting loop, the rear axle adjusters and the seat tube sticker denoting 'chrome molybdenum' tubing, are all that differ from my Sprint frame, the sticker on which reads 'high tensile' tubing.

The later, lugged, Aerospace frames are often distinguished by having the legend 'Viscount' in capital letters, stamped on the chamfer at the top of the seat stays.

Componentry varied on the same model of bike, and I know of a case where someone collected their bike, showed it to a friend, who ordered an identical one which arrived a week or two later - one had half-chromed forks whilst the other had fully painted ones.

by martin biggs
Been watching this one on e bay , just cant pin down the model

anybody got any ideas ?

by Whippet
I’d say it’s as the description / top tube stickers: A Sprint.

by Whippet
Here’s a full list, including the Sprint:

by Halla
I have a catalogue from 1982 which is currently mislaid, there was a sprint sold in that year, it was 5 speed. The frame was I think the same as many other of their bikes of that era. There were also others with that frame, such as the Super Sport, and touring models. The frame was ordinary steel. My Super Sport rode very well despite being on the heavy side of about 28lbs.

Halla wrote:I have a catalogue from 1982 which is currently mislaid, there was a sprint sold in that year, it was 5 speed. The frame was I think the same as many other of their bikes of that era. There were also others with that frame, such as the Super Sport, and touring models. The frame was ordinary steel. My Super Sport rode very well despite being on the heavy side of about 28lbs.

I have one myself and regard it as my best bike - it handles well and rolls very smoothly.

The transfer has the signature of Ian Hallam.

Sprints were made in 5-speed, 10-speed and 12-speed variants. Mine is 12-speed, and I acquired a crashed 5-speed one for some parts.

At Christmas 1982 a Sprint with 25" frame would have set you back £136, according to claireysmurf elsewhere on this forum. 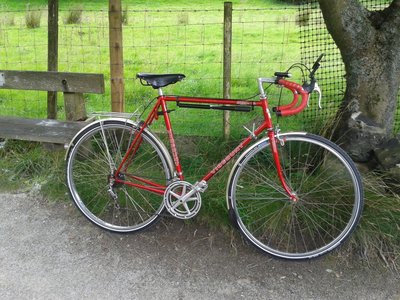