quiksilver wrote:This is mine before conversion.

Hi
Thanks for the photo.
Dead easy to ID this one. I should know, I had one!! It is a UK 1978 Viscount Sebring or - but it is extremely unlikely - a re imported 1976 US only Viscount Sebring. The frames were lugged and made in Taiwan. Bottom bracket shell was threaded for conventional cup and cone bearings. Not a bad frame really but it is worth bearing in mind that it was not made from "Aerospace", Reynolds or Columbus type tubing. Considering the parts Viscount Sebring's came with e.g. Shimano 600, Tourney, SR, etc. it was amazing value at £85 in 1978.
The Viscount "Aerospace" bikes - Pro, GP, Victor, Sport, Grand Tour, GPM - were the ones with the posher fillet brazed frames made of aerospace spec. chromoly steel tubing. The first year of Viscount's production, 1974 saw just 3 models for sale: Aerospace Pro either with tubs or clinchers and an Aerospace GP.
It may sound hard to believe with all the factually incorrect stuff circulated on the internet but the Aeropscae Pro was a hugely successful road and cyclocross race bike. In the US for instance Mick Ives and other team mates really showed the home grown racers the backs of their tyres in 1976. Even more amazing was the fact that most of the race wins were on completely stock 'Pro's plucked off the shop floor. Viscount wanted to build a £100 race bike that actually won races. They did. Lots. It must have been a real worry for the bigger British manufacturers seeing their race division bikes which cost as much as five times more being wiped out by £100 Campy free local bike shop sourced bikes!!! Heady days.
Top

Thanks for I.D. ing it for me. I find the frame is quite light after converting and is a pleasure to ride. I had to retain the original cup and cone BB because of clearance issues in the shell with the amount of down tube extending into it. Will post a pic of it converted soon.
Top

Hmmmm, am having probs up loading, all my pics are too large. When I can sort that I will post.
Top

This is my converted Viscount, I retained as many of the original parts as poss but cables, bartape, seatpost etc needed replacing, as did the wheelset. 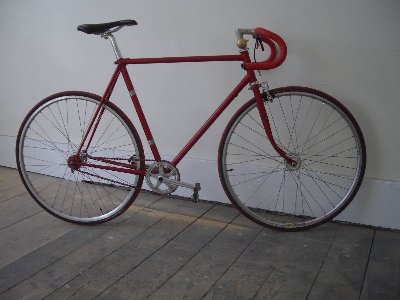 quiksilver wrote:This is my converted Viscount, I retained as many of the original parts as poss but cables, bartape, seatpost etc needed replacing, as did the wheelset.

Looks COOOOOOOL in a way that new fixies can't. MUCH cheaper too!!
Top

Cheers. Funny how things work out, I only bought the Viscount as a cheap beater while I did up my Bianchi over winter, but winter has come and gone and the Bianchi is still in the cupboard and I am loving riding the Viscount.
Top

Resurrecting an old topic here!
I've got an old Viscount that I want to use as a commuter.
It's nice and light and has the clean fillet brazed frame which is great, BUT how the hell do you get the bottom bracket out???
The spindle is totally stuck so there's no option for using as is.
Can anyone help?
I'm tempted to just start bashing it!
Top

They were fitted with pressed in bearings originally, I think they have a small cut out in the BB shell to aid removal?
Top

So maybe jam a flat end screw driver in that and lever them out?
I might give that a go tonight.
Top

Yours is a nice conversion by the way quicksilver
Top

I bought mine in 1979 from Mal Rees Cycles in Hayes for (IIRC) £97.50 - Blue Aerospace Sport with the death fork, wonderful ride and totally reliable.

Sold it to an enthusiast in the mid-90's - I hope it's still running.
The weekend comes, my cycle hums
Top

stoat wrote:Yours is a nice conversion by the way quicksilver

Thank You, mine is a later model without the said cutouts/slots but I am sure I remember reading this before? You will know anyway when you look at your machine. Post some pics and add to the thread

I am the proud owner of a Viscount Aerospace Sport, purchased in 1978 (thanks Mum!). Cobalt blue with half chromed fork. Also shorty mudguards - replaced at time of purchase with a pair of Bluemels Olympic in silver. And I took off the 'suicide' additional brake levers after not very long. And upgraded to a Brooks saddle, a Competition, not one you often see. 27" wheels with Michelin 50 tyres. Shimano brakes and gears (600).

In 1999 the bottom bracket eventually got too wobbly and so the frame went to Argos in Bristol for a ream and sleeve, came back still in cobalt blue but now entirely blue as the half chrome on the fork was rusted.

The Birmalux seat pin cracked some time in the late 1990s, as I was riding home. Completed the journey by taxi! Got a beautiful new seatpost that was no good because back in 78 we got big frames with next to no seat pin sticking out so having a lovely aero bit on the seat post meant I coudn't reach the ground. Got a less swanky post.

It is a much better bike than the teen sports market it was aimed at. As it happens, it's not my main bike these days, I ride around mostly on a Witcomb sometimes with an Isla Rowntree trailer bike attached. The Witcomb was puchased to keep me going while the Viscount was receiving attention! Now the Viscount is my 'sunny day' bike.

The bars and brake levers got replaced, its had various cranks, wheels, derailleurs etc, all normal wear and tear stuff over 30 years use, but it still has orginal centre-pull brakes and Union pedals.

To summarise: for bottom bracket problem, get it reamed and sleeved.

Oh, and no-one's mentioned Tony Doyle yet. All those Cycling Weekly back page adverts.
Rushing through the air at 12 miles an hour will lift the gloomiest thoughts from the mind...and what torpidity of soul is not surmounted by the continuous, delicate interaction of nerve and muscle....C. THEODORE EWART, M.D.
Top

Big T wrote:I transferred most of the bits onto a Falcon Black Diamond frame, which then got stolen!

Bit of an update...
So I checked the BB again, took off the circlips and managed to prise the BB shells out.
The spindle has a crack in it

I took it down my lbs and was advised that the BB shell would be too small to accept any modern BB if it was threaded, I don't know if this is the case or not?

rmw - Would you mind telling me how much argos charged for the work and do you remember which BB you put in once it had been reamed by argos?

I'm wondering whether I can fit a threadless BB so am currently searching for one small enough to deal with the clearance issues the protruding downtube causes...!
Top
Post Reply
2780 posts