If anyone's interested, I just (Sat morning) took a train to Letchworth and went to the Jubilee Road store. They still had quite a lot of shoes, although I didn't look at the sizes. There were a couple of panniers left, and quite a bit of clothing, although it was almost all L or XL. The only computers came in a set with lights that was more expensive.

I'm very grateful to you all for the heads-up.
Top

Reading these posts I checked my new shoes - I take Euro 44s in most makes. These were too big so I nipped back down the road with the shoes & receipt. No arguments, just a big smile and "yes just change them for the ones you want." The 43s fit nicely thankyou and I can't fault the service.
If at first you don't succeed - cheat!!
Top

speedsixdave wrote: A set of Ortleib hooks (c. £20 for four) has sorted that problem, but they're no longer quite the bargain they started out as...

Did the ortlieb hooks fit the rails on the lidl panniers or did you have to replace the rails as well? If they fitted ok was it ql1 or ql2 hooks that you used?

Can't remember exactly, but I think ql1. Will post a snap tomorrow if I get round to it.

Well this may be a bit late now, but hopefully the new improved search facility will make this useful in the future!

I think mine are Ortlieb QL1 hooks, I don't know whether QL2 would work as well. I re-used the original rail, but the hooks do not fit directly on - I undid all the bolts on the rail, moved the rail to the inside of the pannier, and fitted the hooks directly to the pannier body, but with the bolts running through the rail on the inside. See snaps here: 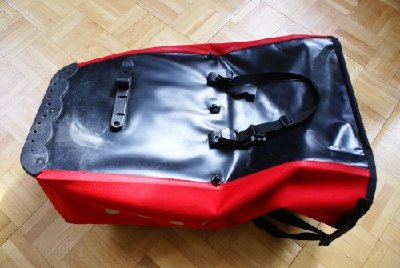 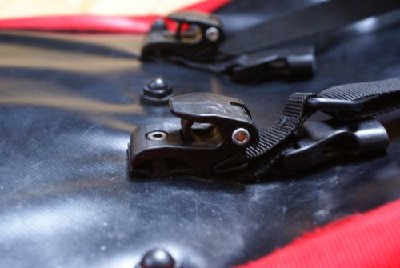 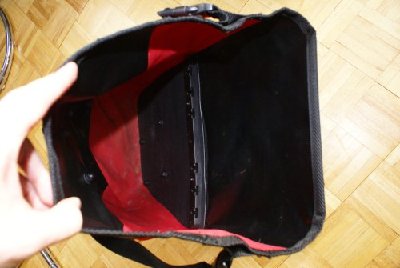 It's a little bit of a bodge, but it's worked fine for over a year now with everyday use. And the panniers are great!
Big wheels good, small wheels better.
Two saddles best!
Top

where's the best place to pick up these Ortlieb QL1 hooks?
Top

They are listed on Ortlieb spares list, so any LBS or Ortlieb retailer should be able to get them for you.
There is your way. There is my way. But there is no "the way".
Top

Re: spare hooks for lidl panniers

We have been using Lidl panniers for a few years and have found the fabric and build quality very durable, just the hooks let them down. By chance I came across a place in Germany that sold identical panniers and were happy to sell the hooks at 1 euro each. They can be contacted at info@vonderpalette.de. I don't know the cost of postage to the UK as I had them sent via friends in Germany. You have to specify which hooks or they could send the ones for the bottom of the pannier. If you use four hooks on each pannier I know from experience they will not break under even a very heavy load.
Top

speedsix, thanks for the photos. I got a pair of the lidl panniers and thought that ortleib hooks wouldn't fit on directly. My current plan is to use tape behind the rail connecting the two panniers and use them as a throwover style when using both and then just have the standard hooks if I just want to use one for light loads. I am thinking on the best way to do it and I might need to get some buckles for the webbing.

cygnetory, Interesting find. I thought that the panniers and certainly the hooks and rails couldn't be made just for lidl. I had a look at that companies site and they stock a range of cycle luggage by Ideale and one of the panniers looks very familiar

I don't know what they would charge posting just hooks to the uk.
Top

Didn't I read recently that they don't allow unions? I'm not happy handing over my money to them. And yes I know that lots of stuff is made or sold by ununionised labour in appalling conditions, but when I know about it I prefer to avoid them.
Top

Unionised or not I don't know but they pay their staff around 50% more than Tesco.
Top

I gave them a quick google and couldn't find pay rates. There was plenty (I looked under Lidl unions) about not allowing unions and what that has led to both here and abroad. It appears that they spy on staff, restricy visits to the loo, impose harder working conditions even than Tesco and so on. Quote from one ex-worker


"I worked in a Lidl while I was at Uni. There would regularly be just two members of staff rota'd in to cover a whole DAY, which would start at 7am and finish around 9pm, because you'd have to be there early to accept and put out the morning's delivery, and while the shop would close at 8pm, your shift would finish at 8 and you'd be expected to tidy the store ready for tomorrow, which could take up to an hour. I once did three consecutive 14 hour shifts without consultation. I realise that farmers and the like would laugh at a 14hr shift as being easy, but being stood (because you weren't allowed chairs - reason being that you couldn't see if customers were trying to steal by leaving items in the bottom of a trolley) behind a till for 12hrs straight, from open to close, because the other member of staff is too busy to leave what they're doing is terrible. It's so monotonous, and because you had to scan items at 60 a minute (yup, one a second! Tesco aim for 30ish) I got a repetitive strain injury from throwing my right arm out repeatedly to grab the next item on the conveyor and fling it past the scanner.

After I left I received a letter from Lidl telling me that I'd been overpaid by nearly £300, and that I'd need to repay it within 14 days or face legal action. There was no way I was standing for that, as I'd worked countless hours of unpaid overtime (especially the 'cleaning hour'). I wrote a very strong letter outlining my grievances, and said that I'd consult USDAW (shop workers union) if they carried on. I got a reply 7 days later saying that they'd 'reviewed my case' and no longer needed the money back. No apology was given."

There is more to unions than the annual pay round. Without them there would be no protective legislation or support for workers.

Sorry to ramble on but it matters.

Quote obviously not from a male - if the average lad doesn't develop RSI in his mid teens he never will!!
Top

Re: spare hooks for lidl panniers

Cygnetory wrote: If you use four hooks on each pannier I know from experience they will not break under even a very heavy load.

How did you find getting the panniers on and off using four hooks? I find it can be quite awkward just with 2 on both types of panniers that I have.
Top

It's a bit of a long story, but we bought two pairs of Lidl panniers 3 or 4 years ago. Worries about the durability of the hooks meant we took the hooks off one pair and put them on the other. These were easy to take off, but could become detached on rough terrain. We wanted to use the second pair of panniers and so bought eight hooks from vonderpalette for a total of 10 euros. These are a new design and are much stiffer and quite hard to get on and off the rack. They probably have the advantage of being more secure though. We have only used them for shopping so far, not a camping trip but they seem ok. I suppose all things having been considered you do get what you pay for, although I still think that the Lidl panniers are excellent value and have served us well for many hundreds of miles.
Top

I wonder whether they have changed the hooks from the ones that people have had problems with? I have attached a pic of the ones my set came with. They look pretty strong and I doubt whether they would bounce off very easily. Are they similar to the original ones you had or the replacements you ordered? 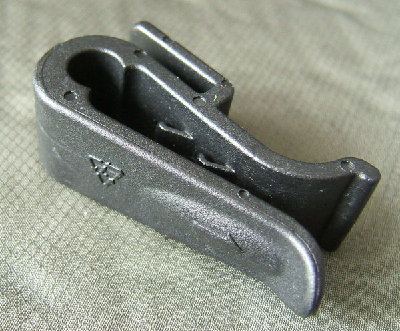