Your Favourite Cycling Book Is....?

Your Favourite Cycling Book Is....?

I like reading cycling books and wonder if anyone would like to recommend a book they have particularly enjoyed? Cycling history, cycle touring, technical or biography.
Top

'Touring Bikes' by Tony Oliver, a very interesting technical insight into touring bike design - sadly it's getting very rare and expensive now.
Remember folks 'A pessimist is just an optimist with experience!'
Top

It's nearly £70 on Amazon! Looks interesting though.
Top

I rather liked A Peiper's Tale (autobiography). It's not the most professionally edited book I've ever read, but it was clearly written form the heart by someone who loves cycling. It is race oriented. I can imagine that some people wouldn't like that, but I enjoyed the book without having a strong personal interest in racing.

I also have read and enjoyed a couple of books by Matt Seaton.
“In some ways, it is easier to be a dissident, for then one is without responsibility.”
― Nelson Mandela, Long Walk to Freedom
Top

Richard's Bicycle Book is very dated now but had a huge influence on me in my early years of riding and maintaining bikes. I've enjoyed other books since, but on nothing like the same scale.
Top

It's difficult to write a good cycling book and it can be so varied, repair, pro-racing, mountain biking.

These are remarkable books IMO.

1. The story of the Raleigh Bicycle by Gregory Houston Bowden, written by a relative of Sir Harold Bowden who was key in overseeing the enterprise for decades and Frank Bowden, founder of Raleigh according to many. Published 1976. Some exciting reading especially about the early record setting rides from Land's End to John O'Groats, they did them on 3 speeds! Yes, they did as well as some info about past racers like Reg Harris. It would be nice if there were more books written about how it was back then and other companies, Phillips etc. and as it is, this book does not seem to be well known. Forward by Alan Sillitoe. Book faithfully follows the basic history of the company: http://www.nottinghamshire.gov.uk/home/ ... meline.htm

2. From Lance to Landis by Walsh. Some don't like it but if you like a real page turner and captivating read, it's good even without having a bias on this situation but just to be informed.

3. The Complete Book of Long-Distance and Competitive Cycling by Tom Doughty, 1983 or any number of other cycling 'manuals' from this general era. There was a real bike boom and it was popular in the late '60s, '70s and early '80s and a lot of enthusiasm by the authors.

4. Bike Love , might appeal more to others but is a book of short stories written by different people on their bikes and the stories they have, all kinds of things. Fairly good, some might like it more than others.

5. Ascent by Yeats. A history of the Tour de France with an emphasis on the Mountains. There are a number of Tour books out there, so in a general way, I'm sure most are good, I've just happened to read this one.

6. Major Taylor, 2 books are out there on this American black rider from the early part of the 20th century, he also rode in France. Exciting and Inspirational. Tells about how the racing was back then. Of course, the modern 'Madison' is styled on the old Madison Square Garden races. He himself must have been very gifted.

7. The Cycling Plus repair manual from the newsagent that is like a magazine with a dvd and on the stands now is about as good as any repair manual I've read honestly. The explanations are very clear with the pictures. Sometimes repair manuals can be a bit dry. That said, it'd probably be good to have other manuals too, it can't cover all the detail but it has a lot of information.

Honourable Mention. Any number of the short stories by the late Alan Sillitoe, just read summat by him. He grew up in Nottingham and worked for Raleigh. There is a lot in his writings referring to bicycles even if they were not straight bicycle books. He was a remarkable author and had a great style. http://en.wikipedia.org/wiki/Alan_Sillitoe , 2nd honourable mention to A dog in the hat by Joe Parkin. It tells a bit of his riding Kelmis races in Belgium.

I'm sure that book out there on Fausto Coppi is good, too I'd like to read Tom Simpson's "put me back on my bike" I think. 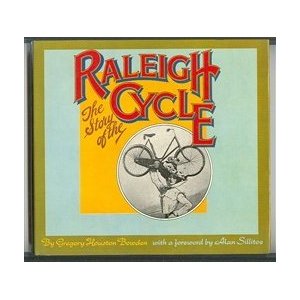 Tom Simpson's book is good and an insight to a man very driven and with a taste for all that cycle success brought.

Wonder Wheels is a lovely book by a lovely lady, Eileen Sheridan and back in print.

Beryl Burton's Personal Best is informative about her life but can be a bit repetitive and one or two chapters are bit undramatic with just listings of that year's successes, but deals with stuff like her relationship with Carol and that 12 hour record.

Just finished Heros Villains and Velodromes, about Chris Hoy and the track team rise to stardom, it is good but does jump around a bit between years especially at the beginning as it goes back and forth to chart british track failures and successes.
I stand and rejoice everytime I see a woman ride by on a wheel the picture of free, untrammeled womanhood. HG Wells
Top

For one of the funniest books about cycling read Tim Moore's French Revolutions. Laugh out loud funny

A few of my favourite touring narratives
Josie Dew, The Wind in my Wheels
Anne Mustoe, A bike ride, Lone Traveller or in fact all of her books.
Bettina Selby, Riding the Desert Trail and all her others.
Pam Goodall, Riding it Out
Barbara Savage, Miles from Nowhere
Rob Lilwall, Cycling home from Siberia
Tom Kevill-Davies, The Hungry Cyclist
Mark Beaumont, The man who cycled the world
Currently enjoying Rob Penn's Its All about the Bike, much better than the TV programme that went with it.
'Why cycling for joy is not the most popular pastime on earth is still a mystery to me.'
Frank J Urry, Salute to Cycling, 1956.
Top

The Crane cousins 'Journey to the Centre of the Earth' was one that inspired me.
Also really enjoyed Mark Beamont's 'The Man who Cycled the World',
Josie Dew's series of books (some better than others),
'Chasing Lance' by Martin Dugard,
I found Anne Mustoe's books a bit dull and historical for me, but they were ok.
Still working my way through Ian Hibell's classic.
Top

"Fat man on a bicycle" by Tom Vernon, I remember his quote ( a bicycle is for stopping)
Top

One More Kilometre and we're in the Shower by Tim Hilton - idiosyncratic but very absorbing. Covers everything from the singing club run to Coppi's love life, passing through Frank Patterson, 50s Communist cycling clubs in Paris,Samuel Beckets love of track racing and how it led to him calling a play Waiting For Godot, village halls, English frame builders, Robert Blatchford,British long distance record breaking, time trials, cross toasting etc etc. Sounds odd I know but a fascinating read written by a man who's cycled for most of his life and can't even drive a car.

Tommorow We Ride by Jean Bobet - brother of Louison and maybe the only intellectual to ride in the peloton - giving up an academic career, at Aberdeen University of all places, to ride with his brother. Though Jean describes himself as a mediocre racer he was, by UK standards, a very good one winning Paris Nice, 3rd in Milan San Remo, 14th and 15th in the Tour etc. It's a damn good read and the description of his brothers last ride before his death from cancer is very moving. Louison put as much effort into that one short ride as any of his TdF stages.
Top

Josie Dew's Long Cloud Ride is great, reminds me how much I want to move to NZ and how much I'll give up cycling if and when I do lol.
Top

pete75 wrote:One More Kilometre and we're in the Shower by Tim Hilton - idiosyncratic but very absorbing. Covers everything from the singing club run to Coppi's love life, passing through Frank Patterson, 50s Communist cycling clubs in Paris,Samuel Beckets love of track racing and how it led to him calling a play Waiting For Godot, village halls, English frame builders, Robert Blatchford,British long distance record breaking, time trials, cross toasting etc etc. Sounds odd I know but a fascinating read written by a man who's cycled for most of his life and can't even drive a car.

I tend to like the books on Major Taylor, who FACED DISCRIMINATION AND VERY HATEFUL NAMES AND ACTS against his well-being even in the face of the self righteousness of VIOLENCE and those WHO IGNORE HATE SPEECH and even showing forgiveness to these STALKING MURDERERS.
Top
Post Reply
113 posts