by ericonabike
I'm using a 30-year-old bike on a 100km ride next Sunday. Iwas out today for 40 km or so, and found that both brakes and bars made my hands really sore! The key area is that between thumb and adjacent finger, which when braking, from the hoods in particular, got really sore. I don't get this problem normally, but the Campag brake levers, hoods and Cinelli bars seem to combine against me! Has anyone any ideas as to the best way to pad that are of my gloves - preferably inside, to give a greater degree of comfort?

by Colin63
Might it be an idea to to stick a strip of high density foam across the top of the brake hood to see what difference it makes to your hands. I can't think that gloves would help as the padding on gloves doesn't cover that part of the hand.

by Mick F
Have you ridden this bike before, or is it new to you?

I'm riding a 27 year old bike with Cinelli bars and Campag brake levers - yes they are Ergo nowadays, but I used to use Campag Victory circa 1986. Same bars still now.

I've always used gel mitts and never had a problem like you describe.

What sort of gloves are you using now?

by ericonabike
Maybe..I was hoping to avoid padding the hoods or bars as the ride I'm doing is the Retroronde in Belgium - specifically for older machines. And so I wanted to avoid spoiling the lines and original condition of the bike! My thinking was to use some sort of foam padding inside the glove, but this may be impractical.

Just a thought.
I bought a pair of mitts from Lidl some time back and was very pleased indeed coz they were a bargain. I went back and bought another pair the next day.

Trouble is, I found that although they were gel mitts, they didn't have any padding whatsoever between the thumb and the index finger!

That could be your problem.

by Mark1978
Riding with Lidl mitts today. I too thought what's the point of the gel inserts on the top of your hand which never touch anything!

Mark1978 wrote:Riding with Lidl mitts today. I too thought what's the point of the gel inserts on the top of your hand which never touch anything!

Have you got them on the appropriate hands?

OP.....try moving the saddle back to take the weight off your hands.

Mark1978 wrote:Riding with Lidl mitts today. I too thought what's the point of the gel inserts on the top of your hand which never touch anything!

Have you got them on the appropriate hands?

I did think that

. Maybe they put the thumbs on the wrong side!

531colin wrote:[
OP.....try moving the saddle back to take the weight off your hands.

Would that not put more weight on the hands?

I would look at the angle of the brake hoods to bar tops.
You could try angling the bars up a bit which would lift the hoods a little higher.
Or how about a plaster where the sore spot is?

I some times ride with palms of my hands on the hood tops - gives a slight more aerodynamic position as well.

531colin wrote:[
OP.....try moving the saddle back to take the weight off your hands.

Heres a little game for you.....stand with one foot a comfortable distance in front of the other foot (maybe a foot in front

, or 300mm if you're metric )
....lean forward in a "racing crouch", and note how your weight is now on your front foot. Now stick your bum out back, and note how your weight is distributed between your 2 feet.
Its not exactly the same on a bike, but there are similarities.....pushing the saddle back means you can distribute your weight between the contact points....hands, feet, bum.
Setting the saddle forward is OK for racing, if you push hard down on the pedals the reaction (equal and opposite, if I remember Newtonian physics at all) tends to support your torso....but if you freewheel, the weight comes onto your hands.

Suggestion 1: cut pieces of foam corresponding to the area required for padding and stick these pads to the gloves with Evostik impact adhesive . I don't think it will so comfortable glueing the foam to the inside of the gloves, though you could try. This foam is stretchy and flexible, so should give a reasonable fit.

Suggestion 2: Using the cut pieces of foam, tape them to your hands with micropore tape

Again, probably not as comfortable as glueing to the outside of the gloves. Experimentation is the key.

ericonabike wrote:I'm using a 30-year-old bike on a 100km ride next Sunday. Iwas out today for 40 km or so, and found that both brakes and bars made my hands really sore!

I remember having this problem about 30 years or more ago. As I recall it was always when wet so I would have been wearing a cape with my hands set in position on the lever hoods. Other times my hands would be moving around much more so there would be no issue. Back in those days the tops of my bars were possibly a bit lower than now, and certainly 1960s/70s bars were more rounded and the lever fitted further around the bend. Combining these features makes me think that when riding the hoods my palms would have been lower than they are now riding Ergo levers putting more weight on the hands. (indeed I know this for fact because my fixed has an old style set up). With modern Ergo levers giving a flat run into the tops of the bars I find that I ride with my thumb/finger junction right at the very back of the hood with the heel of my palm on the bars themselves - a position that is not possible with a 1960s/70s type set up. About once in every 15 years I try riding with mitts but quickly remind myself why I do not like them, preferring bare hands - just my preference. I note that you say you are already wearing gloves - might this not be a part of the problem as the edge of the glove at that point rolls back?

So I'd suggest that a possible answer is to raise your bars a little paying attention to the height of the part of the bars/lever hoods that you are holding. 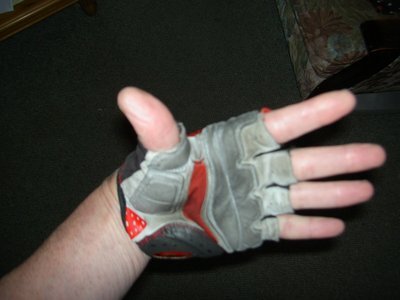 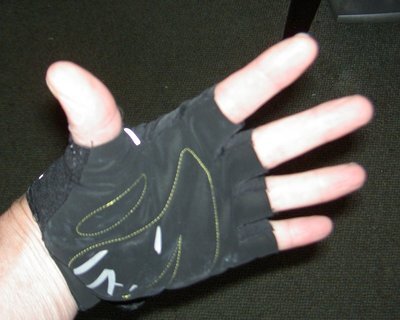 Bad Gloves came from Lidls, and notice the lack of support between index finger and thumb or even the lack of padding at the base of the thumb, there's not a trace of padding, gel or thickness where it matters and I found them little more than useless.

I have two pairs, and if someone had bought them as their first foray into mitts they would be wondering why anyone bothers with them!

by ericonabike
Thanks for all the replies. Yes, the bars are certainly less ergonomic than more modern designs: a much sharper curve, and a sharp slope down to the hoods. Trying to get the top part horizontal would leave the brake levers pawing the air, and they won't easily be repositioned further round the bend, as it were. And unlike modern designs, the cables emerge from the top of the hoods, so your hands can't rest there. Certainly makes you appreciate how comfortable [and efficient] modern bar and brake designs have become - despite the set-up being top-of-range Campag, I have to brake much earlier than with the Shimano 105 set-up I'm used to, in order to stop at the same point!

Anyway, after reflecting on the fact that Sunday's ride involves being on the cobbles for a fair distance, I've gone for practicality over appearance! I've attached high density foam to the inside of the drops, and to the brake hoods. In a nod to appearance, I've used black taps on the bars, to match the tape, and white tape on the hoods. It looks....different, but feels wonderful!
All times are UTC
Page 1 of 1
Powered by phpBB® Forum Software © phpBB Limited
https://www.phpbb.com/