I've often cycled and walked past this Cycling Storage sign in King Street, Chester but not noticed till today the triangular badge beneath saying
Road & Path Cycling Association. Does anyone here know of this group? Is it older than the CTC?
Link to the photo of the sign
http://www.geoffnelder.com/closeup-cycstoragesign.jpg
website
blog
Tweet
Top

Geoff_N wrote:I've often cycled and walked past this Cycling Storage sign in King Street, Chester but not noticed till today the triangular badge beneath saying
Road & Path Cycling Association. Does anyone here know of this group? Is it older than the CTC?
Link to the photo of the sign
http://www.geoffnelder.com/closeup-cycstoragesign.jpg

Unlikely that this organisation is older than the CTC, which dates back to 1878, more likely another parallel or locally based organisation that fell by the wayside I would think and I would guess at early twentieth century for that sign as compared to the late nineteenth century CTC signs like the winged wheels.

I bow to your knowledge.
Out of interest that Pied Bull Inn has its origins on that site dating from the 11th Century and a few ghosts including a cellar man and a barmaid - allegedly.
website
blog
Tweet
Top

There is a Redditch Road and Path Cycling Association which dates back to 1885 apparently, but I don't know if it was part of a larger organisation. Redditch is a bit far from Chester for them to have stored their bikes there.
Top

Geoff_N wrote:I bow to your knowledge.

I wouldn't do that, I'm only guessing!
Top

It was translated from

Spotted another one of these in New Quay, Ceredigion, while on holiday last week. A quick Google shows that these signs survive in Lichfield and Wigan too, and the club seems to be mentioned a few times in the newspapers.com archives...

Of cycling associations there is no end. Mr. R. B. Oakley is the promoter of the latest, and he states that the Road and Path Cycling Association is an "old friend with a new face." It will be confined to genuine amateurs, and several inducements are offered, which the hon. sec. will no doubt be pleased to explain. The R. and P.C. A. has met with a good deal of hostile criticism generally, and on one point in particular. Apropos of this, we invited Mr. Oakley to enlighten us as to the special terms offered to intending members in the purchase of cycles. " We stated in our prospectus," Mr. Oakley states, " that ' almost every maker of eminence of cycles and accessories had either placed us on wholesale terms or on special terms.' It was no part of our business, and it would no doubt have been regarded as a breach of confidence to divulge in a public communication the terms accorded by any particular firm. With one exception, viz., of a firm to whom we did not address ourselves— Eadie's—every one of the firms enumerated by our entries, and some thirty others, have accorded to us the privileges named in our prospectus. " As a matter of fact the smallest discount accorded to us by any firm in the trade is 22.4 per cent. This comparatively low rate is only on one particular class of article. The discounts for the other products of the same firm are 32><, and of all the other firms very much in excess, some of them going up as high as 60 per cent. In some cases the terms are expressly stated as wholesale, while in others it is obvious from the magnitude of the discounts, without expressly saying so, that they are in fact wholesale terms. Anyhow, the discounts allowed to the Association are far beyond those granted to private customers, or even to the customers of the co-operative stores, and pro tanto it is a benefit to a cyclist to become a member of the Road and Path Cycling Association which is all that we contended for. " I have not only written to the firms, but have their replies and the terms in writing, and shall be quite prepared to show the whole of the quotations to any respectable and independent person." Mr. Oakley's invitation to "any respectable and independent person " should be accepted, for more diametrically opposed statements than his and his opponents we have seldom seen.

The Road and Path Cycling Association are displaying the greatest energy and arranging and supplying full details for delightful spins about pretty and interesting parts of the country around London. Cyclists who have not the chance, or the wish, to ride with their own particular friends will be well advised in sending for particulars to Mr. R. B. Oakley, the hon. secretary, at Rooms 22 to 24, 11, Queen Victoria-street, E.C. There is every chance that these carefully-planned parties will prove very successful.

Without wanting to get into the whole CTC/CUK thing, it strikes me that resurrecting the name of the Road & Path Cycling Association wouldn't be a bad idea for any new touring-focused organisation!
cycle.travel - maps, journey-planner, route guides and city guides
Top

Richard Fairhurst wrote: ... Without wanting to get into the whole CTC/CUK thing, it strikes me that resurrecting the name of the Road & Path Cycling Association wouldn't be a bad idea for any new touring-focused organisation!

My suggestion wouth be "Shared-use Path Association. That could be divided into two interest groups ie bellringers and non-ringers.

Here is some additional information

I believe it dates from the days of Road and Cinder Tracks.
I stand and rejoice everytime I see a woman ride by on a wheel the picture of free, untrammeled womanhood. HG Wells
Top

I agree that Path is liable to misinterpretation nowadays (even among cyclists) but it's part of the club's history so would be a shame to change it*. Out of interest I looked up some other cycling clubs I knew to date back to the 19th century and found that Bath CC is five years older.

The Bath CC is one of the oldest cycling clubs in the country, having been formed in 1880 during the “Penny Farthing” era. It began as the Bath Arial Rowing and Bicycle Club. Four years later the cyclists broke away from the rowers and changed the name to the present one. The reason for the break seems to have been the cyclists’ wish to run road races which at the time was greatly frowned upon.

http://bathcc.net/about/
So road racing in Britain originated long before that bloke who's name I've forgotten during WWII! (but obviously it disappeared in the meantime for legal reasons). There is still an Arial Rowing Club but ten miles down the river in Bristol and there still seems to be quite an overlap between rowers and cyclists.

They don't seem to have left any historic road signs though.

*Well that's for the club to say not me!
Top

A slight resurrection of this thread. I noticed another Road and Path Cycling Association sign in Wigan, on the former Victoria Hotel next to Wigan Wallgate Railway Station, together with a CTC Winged Wheel on the opposite side of the front door, photo taken yesterday. I found the number of cyclists riding on the busy footpath past the sign sadly ironic,
(I realise path had a different meaning in the context of the association). 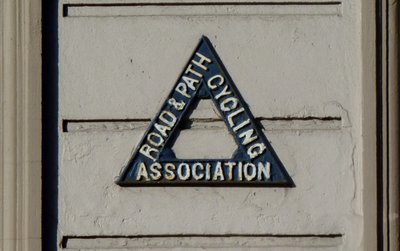 The full story of this organisation and it's (lack of) relationship to the CTC is at this Cycling North Wales link.
https://www.cyclingnorthwales.uk/cyclin ... sociation/
There is a wonderfully acidic piece of writing quoted from the CTC gazette May 1895 in the article
regarding the different levels of subscriptions to the R&PCA.

A picture of the whole building frontage here on Geograph :
https://www.geograph.org.uk/photo/5899882
Top

I must have walked past that hotel millions of times, and never took any notice of it.
Brought up in Wigan, went to primary school there, but moved out of the town to Standish. Went to Shevington County Secondary School and left after GCEs in 1969 then joined the RN.

Thanks for bringing this up!