...........you know the kind I mean - there's a thin cable that retracts into a plastic case - the ones that I've seen have been combination locks - I've never had one, never even handled one.

A situation has developed at my local Lidl whereby the only fixed feature that I can lock the bike to has very limited clearance between it and the wall. There's not enough room to thread any 'D' lock or any cable lock that I know of - except the thin cable type.

I only want to lock the bike to deter any casual passing-by scroat - absolute security is elusive - but does anyone know how good these things are? Has anyone had any good or bad experiences with them? Does anyone have a favourite that they'd buy again?
Top

I've got one of these that goes with me all the time just in case I need it.
http://www.evanscycles.com/products/squ ... wgodHW0AAw
Although I've used it lots of times, I've never had a situation where someone wanted to cut it.
No doubt it deters a casual walk-by thief.
Mick F. Cornwall
Top

they are all rubbish if someone attacks them with even the most feeble tools. I quite like the ones with little levers on the number wheels simply because they can be worked by feel, even in the dark.

I have a feeling that you can increase the deterrent value slightly if you make the lock look different to other locks of that sort; a thief will I think try to go for an easy target, and a lock that is easily recognised as being of a particularly feeble type is a sure fire thing in the eyes of the crims. Doubt is one thing but if the bike is secures is a bit grotty too, then he'll most likely just move on to easier pickings elsewhere.

I had one which was probably only a deterrent to the most casual of thieves, and I used to joke that you could probably cut the cable with a blunt pair of scissors. Its very fragility turned out to be an advantage on the day that it seized up so that I was unable to open it when I returned to my bike outside a cafe. A friendly builder working nearby cut through it with one blow of his club hammer on a very blunt chisel!

Having said that, that type of lock is so light and convenient that I still use one for short stays in relatively safe locations.
Ray
The trouble with the world is that the stupid are cocksure and the intelligent are full of doubt - Bertrand Russell
Top

It depends how much you value keeping your bike, but would a 6mm cable alarmed motorcycle lock or a frame lock like the Axa Defender that has an add-on 10mm cable fit through the gap? Just how thin is the gap?

Personally, I'd go to a shop with a better bike rack instead if you have any choice. Except Morrisons because their advertising lorry parked on the cycle track next to a hazardous junction on Tuesday.
MJR, mostly pedalling 3-speed roadsters. KL+West Norfolk BUG incl social easy rides http://www.klwnbug.co.uk
All the above is CC-By-SA and no other implied copyright license to Cycle magazine.
Top

I have a thin cable combination "cafe lock" which is alarmed (made by Yale - TESCO sells - or did a few months ago - them) - IIRC about £12.

Cutting the cable, obviously, sets off an ear-piercing alarm that attracts attention! - BUT - the it also has a "disturb mode" which means that if it's touched the alarm goes off (after a short delay to let you open the combination lock) ... a bit too sensitive when used outside in the breeze, that's enough to trigger it.

I have an ABUS one. I carry it in my saddle bag whenever I ride solo just in case I need to quickly pop into a shop or cafe for some reason. I wouldn't trust it to stand up to any beating or flummox even a lightly prepared thief. But it may stop the opportunist bike thief. Bit it's better than nothing. If you're regularly going to be locking your bike up in the same place for more than a couple minutes then get something better!
~ ~ the tempo cyclist ~ ~ the tempo cyclist ~ ~
Top

when the club emerged from the pub one night a friend found his lock had changed its combination and would not open. I said I had heard that a good sharp pull would do it.It did . It was so easy we were horrified , and I would never use anything like it except as a decorative addition to real chains.
http://s189.photobucket.com/user/borisacat/library/Cycle%20Paths
Top

I have a cable lock from Wilkinsons which I have no illusions that will just buy me enough time to notice someone is interfering with my bike and go out to challenge them. Wouldn't like to use it to park my bike anywhere I can't see it.

Even though this has a bracket it still manages to get in the way all the time.

I have a number of different locks from the 'light to heavy' in terms of weight and security, but the one I use when I'm only leaving my bike in sight and to prevent someone walking by and strolling of with my steed, is the one below. It uses a 1" padlock and a thin wire strop, weighing in at 49gms. The strops are available from eBay in different lengths and cable thicknesses - I think this is 2mm wire, 1m in length and with P&P was £5.80. The ebay seller I used is this one . 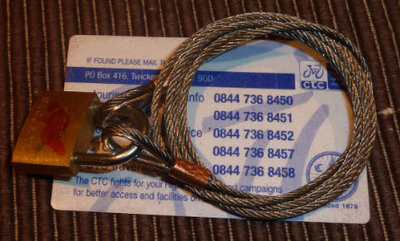 JohnW wrote:...........you know the kind I mean - there's a thin cable that retracts into a plastic case - the ones that I've seen have been combination locks - I've never had one, never even handled one.

A situation has developed at my local Lidl whereby the only fixed feature that I can lock the bike to has very limited clearance between it and the wall. There's not enough room to thread any 'D' lock or any cable lock that I know of - except the thin cable type.

I only want to lock the bike to deter any casual passing-by scroat - absolute security is elusive - but does anyone know how good these things are? Has anyone had any good or bad experiences with them? Does anyone have a favourite that they'd buy again?

Walk your bike round the store?
A shortcut has to be a challenge, otherwise it would just be the way. No situation is so dire that panic cannot make it worse.
There are two kinds of people in this world: those can extrapolate from incomplete data.
Top

The 'elf and safety drones would have you out within seconds.
Top

I use something like this for locking in-sight or next to me.

Bought one in Germany a few years ago for about 5 or 6 E - surprised to see it so much cheaper here.

That thing of yours Mick F looks terribly over-priced.

I have something similar that I have used on campsites as an additional protection but it has a sound alarm as well - originally intended to protect/guard laptops.

Any tips for securing a cable lock to the frame and not having it fall sideways, rub against your leg or otherwise get in the way all the time?
Top

I use a thin spiral cable and suitcase padlock outside my favourite caff, but only because I can see the bike from my usual table. If I'm with a bunch I'll be happy not to have it in sight, since it has a plain metal frame that looks repulsive with its usual splatter of crud, whereas most of my chums are cleaning fetishists with sparkling carbon efforts that fairly scream "pinch me".
Have we got time for another cuppa?
Top
Post Reply
29 posts