by drossall
Seriously? I grew up near Winnats, and think of it as no more than a routine grind. Hardknott and the Bwlch y Groes were both much harder.

by Mick F
Not done Hardknot or Winnats, but Bwlch y Groes wasn't bad at all even though I was towing a heavy trailer.
Not that I've ridden all these hills discussed, but so far I'm not fazed by any of them.
They are only hills. Take your time, relax, and get in the right gear.

by drossall
To be fair, my only attempt on the Bwlch was as an inexperienced teenager, on 40*28. I stalled on the steepest bit.

Hardknott was decades later, and I'm not as fit as I was, though I was never a climber. But I'm sure it's harder than the Bwlch, and far harder than Winnats.

by Chat Noir
Interesting question, Simon Warren’s books provide a good selection and set of judgements but the debate between riders will always continue – that’s part of the fun.

This year, Hardknott definitely the hardest I’ve done in UK and probably hardest any time (first time couldn’t get up the second steep section without a rest and then couldn’t remount it was so steep, but managed whole of it a month later on the coast to coast sportive). Bealach na Baa a beautiful climb and setting, continuously challenging but never so severe that upward progress curtailed, staying on the bike with the traffic the bigger challenge although they all made efforts to let me get by. Rosedale Chimney is a climb I sometimes get up and sometimes get stopped by the really steep bit after the second hairpin (and the café stop at the bottom probably a factor), but is do-able with a low gear (I use 30 x 30) and not too long. In Yorkshire, Park Rash is the hardest I do on a regular basis (again, the café at the bottom often has an influence!), very steep and then carries on being steep for a long time before any recovery available.

I suspect Great Dun Fell is harder and hope to give it a go before long; some of the south Yorkshire and cobbled climbs look severe, but I’ve not done them either.

The hardest I’ve done this year was abroad, in Georgia, going over the Abano Pass in the Caucasus mountains. Dirt road, driven by lorries and 4x4 vehicles, the Garmin showed we went upwards for more than 25 miles, 2600 m of ascent to 2962 m. In places the road was rock that had been scraped bare, very steep, but never in the realms of 25% or 30%, perhaps 20% maximum, but the steepest was the last few miles. We were on MTBs, weighing 25 kg with camping gear and food supplies, so added to the struggle, but we needed these bikes to cope with conditions, panniers, fast descents and very harsh surfaces. Turns out the BBC made a programme few years ago about the world’s worst roads and featured this – the Georgians really chuffed with this! 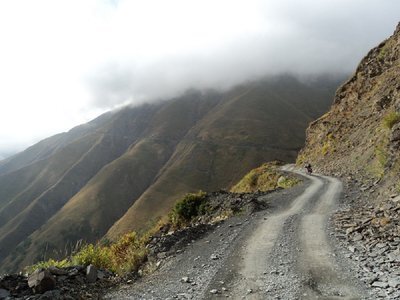 The only time I've gone up it as I was at the second hairpin a car passed me just before it. I got round the bend then faltered so walked the next 50 yds til it eased and got back on again. When I got to the top and passing the car park the occupants of the earlier car were standing on the roadside applauding my efforts. I received it gracefully and didn't make them any wiser.

drossall wrote:Seriously? I grew up near Winnats, and think of it as no more than a routine grind. Hardknott and the Bwlch y Groes were both much harder.

It is a routine grind, given appropriate gearing. It's when you haven't that it becomes difficult - I thought I was in danger of pulling the handlebars off.

by gloomyandy
I rode up the bealach na ba earlier this year on my touring bike (26 front x 36 rear!) with full touring and camping gear. It was hard work but the main problem was dodging the traffic coming down (though I must say they were very good!). A guy on a road bike came past me at one point but a little higher he had to stop because of traffic and seemed unable to get started again so I passed him (slowly!).

Jackson Bridge is a local climb and I've ridden it a few times on my carbon summer bike (34x28) and have always found it ok. Similarity the climb over Holme Moss (though really Holme Moss is more of a challenge due to the pretty much continuous climb from Holmfirth).

It is hard to even compare these climbs due to the difference in length and character. They are all good, but the bealach will always be special as it was part of a fantastic tour and was a long held target for me ever since I first drove over the road to Applecross many years ago.

by khain
Lowther Hill at 725m is higher than any public road and extremely steep. You won't find the road on maps as it's not public but is tarmac all the way up and shouldn't be a problem to cycle on. I've only ever walked up and that was hard enough.

khain wrote:Lowther Hill at 725m is higher than any public road and extremely steep. You won't find the road on maps as it's not public but is tarmac all the way up and shouldn't be a problem to cycle on. I've only ever walked up and that was hard enough.

by Paulatic
Leadhills highest village in Scotland I think.
You can see the sign for it in my profile picture. The first time you do it you think the summit is just around the corner. Wishful thinking lol

Edit: I probably should of said Wanlockhead as it closer. I mention Leadhills as I always go in and out through the village. When I'm in the shop I always comment on what good weather they keep up there.

As I only ever set off up there on a good warm dry sunny day.

Paulatic wrote:Leadhills highest village in Scotland I think.
You can see the sign for it in my profile picture. The first time you do it you think the summit is just around the corner. Wishful thinking lol

Thanks - I never knew that!

by rjb
While this may not be the longest or steepest i have always found Trentishoe hill on Exmoor to be tough. Its on the exmoor coast between Combe Martin and Lynmouth. It ascends from the Hunters inn up to St Peters church above the heddon Valley. According to bike hike It rises 370 ft in 0.46 miles which works out at about 1 in 6 and its pretty well constant. Its tough because you will generally have climbed plenty more on route here. The sign at the bottom points out its a cycle route but unsuitable for motor vehicles.

Anyone else ridden it.

by NATURAL ANKLING
Hi,
Been there several times and in the dark too, tried to find a way from Combe Martin (housing estate built there recent and road map is no good) to Lynton on the coast and ended up doing a 5 mile loop back to where I started, no map or compass, like I said 02.00 in the morning.
Up the side of the inn.........looked and wasn't sure hence getting lost, a bummer as tried and failed twice now, wrote down instructions but no

Ah the church, driven down that road I think many times and sure I cycled it too, next time maybe.
Porlock is nice up but down stopped three times to burn my fingers on the front rim, like I could do anything to cool them

by rjb
It's a long time since I took that back road from Combe Martin. I had 2 attempts before I found it. It's very steep to start with and looks like someone's drive but there was a discrete sign which I noticed on the 2nd attempt. It's a nice climb up the valley with super views. I use google maps street view to look at difficult junctions before I get there.