Next year I have a significant wedding anniversary (30th). I would like to go cycle touring in Germany (actually I wanted to cycle in the hebrides, starting at Oban but TOH is a reluctant cyclist), we speak German and I would have been happy to have gone over there with our bikes on the train and camped. But TOH wants comfort and doesn't want to take the bikes with us but hire them there, or have them as part of the 'package' (I would prefer my own however). This is the compromise. Not sure if I can push the compromise further. Has anyone done this and can anyone recommend a company? Prefer southern Germany or Austria, though I'd happily go anywhere (but not France or Italy). And it has to be early July as he's a teacher (in Scotland obviously).
Top

It has a wealth of information, the "Discover Germany by Bike" booklet is excellent. It contains details of all the major cycle routes and there are plenty of others which you can find out by getting in touch with the regional or local tourist offices.

I can't advise on bike hire but one of the things I've seen, on both the Rhine and Mosel, are the cruise ships which carry a number of bikes for use by passengers.

German Youth Hostels are generally very good and you can book a family room in most. I prefer to use my own bike as well and my solution is to take my car with the bike in the back. I then book myself into a hostel, have three or four days touring the local area and then move on. If you do something like this, you can make your way to Bavaria in stages and sample plenty of very enjoyable cycling on route.

My personal recommendations would be Prum, in the Eifel mountains, not far from the Belgian border. It has an excellent hostel and some lovely cycle routes. Also high on my list is Berkastel-Kues. A nice hostel and the view over the Mosel is stunning, the cycle routes are very good but the climb up to the hostel is a killer - it sits on a crag above the town. There was some talk that this particular hostel may be closing but there are several others on the Mosel. Creglingen on the Romantische Srasse and Oberbernhards in the Rhon area are both well worth while.
Top

This could fit the bill. The MS Normandie cycle cruise holiday on the Danube looks good and the prices are quite reasonable. Cabins are small but en-suite and all food is provided, so hopefully this addresses the comfort issue, and the cycling is all downriver so it can't be too demanding!
PS: They'll even supply electric-assist bikes if you really want to embarrass TOH.
Top

TOH doesn't cruise, makes him sound like a fussy so and so, but he does hostel. He has plantar fasciitis at the mo and has had all summer.
Top

Donau Touristik http://www.fahrradreisen.de/veranstalter/donautouristik.htm organise self-guided holidays along the Danube. They hire out bikes or you can take your own. In July I did a 7-day tour from Passau to Vienna. Great hotels, lovely cycle paths and good bikes. The Austrian hospitality was second to none.

A highlight of the trip was the ferries that carry bikes from one side of the Danube to the other, a couple of Euros each way.
Top

We did a Danube boat and bike with www.radreisen.at (who are re-sold by many companies) and it was fabulous. I didn't like the idea of cruising but I don't think it is like cruising (or not my view of it) as with only a 3hr evening journey one evening to leapfrog a boring bit and into Vienna and then a final night overnight back to start at Passau the rest of it was us cycling every day with the boat as a travelling sag wagon and bed. Daily distances a bit short for some perhaps but it was 30C so we didn't mind. Bikes available are OK but step through design and heavy but on a flat river it is of no concern - pedal assist available too.
Top

Elizabeth_S wrote:TOH doesn't cruise, makes him sound like a fussy so and so, but he does hostel. He has plantar fasciitis at the mo and has had all summer.

Acutally to clarify, TOH snores and has become immune to sharp elbows; I don't do small rooms with him.
Top

Tried ear plugs of all types but I have very, very good hearing so they only deaden the sound and I'm prone to ear infections, so they are pretty much out. Plus he exhales at my face which is really really annoying, twin beds are even more annoying as he is so far away I can't elbow him. Beginning to wonder how we've made it to 30 years!
Top

Elizabeth_S wrote:Plus he exhales at my face which is really really annoying, twin beds are even more annoying as he is so far away I can't elbow him. Beginning to wonder how we've made it to 30 years!

Mrs P complains that I breathe at night. She's yet to suggest an alternative...

There are several companies running holiday hire packages for Bodensee - Stuff for the OH to see/do, miild climate, easy riding as its mostly flat, you can also visit Switzerland and Austria if you do a circuit of the lake. Easy access by air via Zurich or Munich - should be something for everyone!

Germany is a wonderful for a cycling holiday. There are numerous posts on this site . For organised holidays search on "Oogle" There are quite a few to choose from . I have been going to Germany for about 30 years , I often used Steven Bent`s cycling and walking holidays but sadly this year he went into `administration`. There may be a chance of the holidays returning under another company. I toured the Bodensee (Lake Constance)with another company now H F holidays it was a "bought in "holiday run by Austrians who had no idea about treating their customers. I now take my own bike as the usual hire bikes are very basic and on some holidays you have to pay a deposit on the bike. If you and your husband want a "luxury " holiday Susie Madron`s cycling for softies in France is worth cosidering ,the holidays tend to be expensive but the hotels and food are good.
Top

A couple of years ago I found myself in Rothenburg ob der Tauber on the Romantic Road (Romantische Straße) without a bike. There were a number of bike hire shops (I understand) and locally available maps detailing the network of cycle paths and several loops. I didn't plan anything until I got there, but I think it would make a great base for cycling. The bike I hired was from a local shop rather than some organised cycle holiday affair. My bike was very basic, but more exotic ones were available. Some words and pictures:

Last year I went on another holiday in southern Germany. Again it wasn't a cycling holiday, but there were several options I discovered when we got there. I never got round to writing a blog post about that trip, but there are a number of things that might be relevant to you. We stayed in Schluchsee. Bags of cycle paths and trains that accept bikes.

Our hotel was one of many in the area that gave its guests these cards: 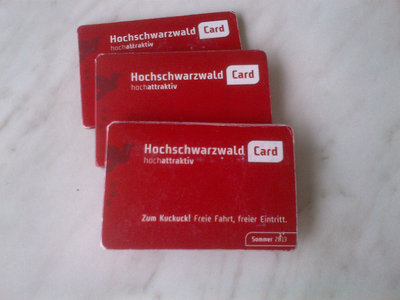 They entitled us to free e-bike hire or discounted use of other options. (Also free use of the trains and boat trips on the lake etc.)

I hired a 29er (because I'd never ridden one) and an e-bike (because it was free).

(I think it's worth considering cycle hire on an ad hoc basis, especially if TOH is not as keen as you.)

Apologies if you already knew all this stuff. I didn't

SWMBO and |I have done a couple of cycling holidays on the Mosel, the teraine is flat along the river obviously but there are some more interesting paths off, and particularly into the Eifel. There is also a cycle route through the Eifel along the river Kyll which I am yet to explore but does look interesting.

Plenty of cake shops, intersting towns and castles with lots of accomodation and bike friendly so worth a visit.

I have seen lots of bike hire but can't offer anything specific because we take our own.

You will love it.