For discussions within the Cycle Training profession.
Post Reply
2 posts • Page 1 of 1

There I was leading a CTC Holiday group in deepest Northumberland - Powburn actually - and we'd just turned right off the main road into a cafe when a car screeched up and out got these two people who said what an exemplary right turn we'd just done. A bit random, thought I, and asked why they were interested and they replied that they were cycle trainers - Cycle Experience, I think, but I can't be sure. Anyway, a conversation ensued and I told them about my rear tyre which was on its last legs, having had a bad time on the rough through the Wark Forest. They concurred that it didn't look too happy and said they had a spare or two and would drop one into the YHA at Wooler that evening. I said I thought the tyre would probably make it to Berwick so wasn't unduly bothered but thanked them in anticipation of the trouble they were going to for a complete stranger.

Well, the tyre exploded about a mile from Wooler and I wondered how on earth I was going to complete the tour. Would my new friends deliver the tyre to Wooler? I would know in a few hours, or it would probably be a bus for the rest of the way (I was riding a 20" wheel folder - see below).

I need not have worried: the tyre was duly delivered while we were out at dinner and I just couldn't believe my luck at bumping into these two wonderfully kind folk. Thank goodness our right turn had been exemplary or they might not have stopped at all !!!

Whoever you are, I just want to repeat my undying thanks for your help. It's never good when a tour leader doesn't make it to the end of a trip and without your help, I most certainly would not have made it. The likelihood of finding a 20" tyre in Wooler was slim, to say the least. 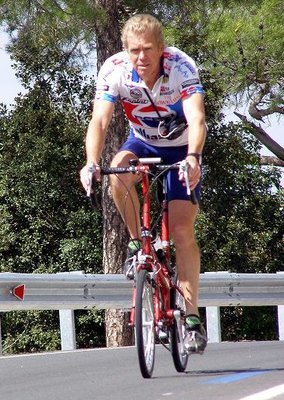 It's good to know that there are still some helpful,kind hearted people about!
Jason Patient is the Regional Manager,but it will not have been him,as he only rides a bike!
No doubt find out who it was at BikeRite 20 in Wooler in October.
Top
Post Reply
2 posts • Page 1 of 1