Anything about use of this forum : NOT about cycling
Post Reply
15 posts • Page 1 of 1

I wonder why URLs in posts don't open up in a new page/tab anymore... (this is easy to do in code)

I like that as you can open several links referred without having to lose the original or wait for a 'open in new tab' right-button menu (it's also standard on most forums too, so expected).

Or it could be yet another firefox bug that happens only for me, only on this forum...

/robert with 150 tabs cluttering things up, but handy since I /plan/ to read them all before closing them...
Top

No. You need to qualify that.

Some of us are on Macs.

It's command-click on a Mac!

(Command is the key with the ⌘ cloverleaf on it, and either 'cmd' or 'command'. Control is the key that says 'ctrl' or 'control'.)
cycle.travel - maps, journey-planner, route guides and city guides
Top 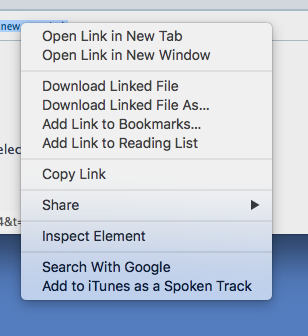 Even if it's raining, I rarely bother with a mac.

For me, right clicking brings up several options of which the first is "open in new tab."
Top

But you know all that.

Richard Fairhurst wrote:That's true, but command-click on a Mac is the equivalent of control-click on a PC to open in a new tab, which is what was being discussed here.

What's being discussed is a new tab and/or a new page.
As per all the other linked threads on this subject.

Cntrl/click on a Mac gives you the choice of a new tab or a new page.
Cmd/Click only opens a new tab.
Mick F. Cornwall
Top

No, not "only". If you really insist (and assuming we're talking about Safari)...

Command-click is either a new tab or a new window, depending what you've set in Preferences->Tabs. Command-option-click is the opposite. (And there's also shift to open a new tab/window and bring it frontmost, and you can reverse that with a preference too.)
cycle.travel - maps, journey-planner, route guides and city guides
Top

hujev wrote:I wonder why URLs in posts don't open up in a new page/tab anymore... (this is easy to do in code)

According to this thread, there was a change between phpBB 2 and 3. It's probably that.

The underlying reason is probably that W3C accessibility guidelines discourage forced new tabs/windows. I'd support that view; like you, I think, I tend to open several threads in different tabs, but I do it under my control by right-clicking, as others above have described. I hate sites that force new windows on me, and have been known to install browser extensions to over-ride that behaviour. Forcing new windows that I don't want, and requiring me to install such an extension, is much more intrusive than leaving me to open the windows that I want. Forced tabs on mobile devices are particularly hard to manage.

The thread I linked to says that the forum operator can amend the code to re-instate the new windows, but I'm glad that this has not been done.
Top

If I go to other fora, they ALL without exception always open a new page logged in or logged out.
Mick F. Cornwall
Top

PS:
Just checked.
I'm wrong regarding logged in or out on this forum.
It's the way it used to work, and I've not checked since.

Yes, Richard, you are correct of course, but by altering Preferences, you don't get a simple choice or new tab or new page.
Mick F. Cornwall
Top

Yes, you do. You make the choice by holding down alt/option, or not.

Anyway… OP, do you have a middle button? Most browsers will use that as "open in new tab".
Top

Bez wrote:Yes, you do. You make the choice by holding down alt/option, or not.

Not really.
It produces a "pop-under" new window. If that's what you want, that's fine.

Far easier, it to only hold one button down - Control - and click. This gives you a menu, and you chose whatever you want. You don't need to change System Preferences at all either.

There's always more than one way to skin a cat, so do whatever you want I suppose. Personally, I find Cntrl/Click the simplest and intuitive method and do it without thinking. This method also does spell-check etc. Cntrl/Click always produces a menu.
Mick F. Cornwall
Top

There's a phpBB extension that does this, but already there's much discussion about which particular links should be affected, and which not...
https://www.phpbb.com/customise/db/extension/elonw/

It's quite possible to force new tabs for external links, but making it a user preference is more work. Especially as each theme has to be modified.

So I tend to err on the side of telling people how to open links in a new window in their particular browser: this method then works for the entire World Wide Web.
Top
Post Reply
15 posts • Page 1 of 1