Use this board for general non-cycling-related chat, or to introduce yourself to the forum.
Locked
21766 posts

How to make big returns from Brexit...

I think you've hit on the reason for the leave campaign and why it was run by wealthy folk and financed by even wealthier ones.
Top

pete75 wrote:I think you've hit on the reason for the leave campaign and why it was run by wealthy folk and financed by even wealthier ones.

Double your money every year. Given it's free probably worth going and seeing what sort of pyramid scheme they're selling...

Perhaps it's real, bung a £1000 in it and in 10 years you'll have a million quid!
Makes me wonder why that guy wastes his time doing seminars...
Top

kwackers wrote:Makes me wonder why that guy wastes his time doing seminars...

Quite. Probably the most reliable way to make money from Brexit right now.
Top

Yes, shorting opportunities galore, the banksters are rubbing their hands with drooling anticipation…

After May's humiliation yesterday where do we go from here? With the party conferences starting on sunday its going to be an interesting couple of weeks.. Pass the popcorn.

Lance Dopestrong wrote:
Not me matey, or thirsty, or short of fuel or cash. Im prepped, and if it all goes smoothly then the preps wont be needed, but wont be wasted in the long term.

Yep but also lay in about 500 12 bore cartridges in case the underclass turn to violence , robbery, raping and looting. Hull Extreme BB a good bet. They'd drop a chav at 60 yards.

I do have a shotgun, but my licence doesn't allow quite that many cartridges...

Are you sure? Normally a shotgun licence allows unlimited ammunition. Restrictions only apply to section 1 ammo.
Top

al_yrpal wrote:After May's humiliation yesterday where do we go from here? With the party conferences starting on sunday its going to be an interesting couple of weeks.. Pass the popcorn.

The humiliation wasn't yesterday IMO. It was a few weeks back when May accepted far too many amendments to the original Chequers plan that the rEU had already rejected. Yesterday was just an entirely predictable confirmation that Barnier's negotiating team hadn't been undermined by their politicians like her party had undermined her negotiators. I don't know what they're putting in the drinks of most UK journalists in Brussels, but it seems to be hallucinogenic from the bizarre coverage in most of the press this morning, including portraying the rEU doing exactly what they said they would as "mobsters" and "vengeful".

Where do we go from here? I'd guess at power struggles and diversion tactics vying for coverage during the party conferences yet to come, then either confirmation of no-deal over the next few months if the money-traders think they can get away with it politically, or going back to rEU with a "Chequers lite" plan that she should have taken this month.

I hope that the People's Vote campaign for a third referendum, this one on a real deal and not unicorns and rainbows, keeps building momentum, but I don't really expect it to succeed in time.
MJR, mostly pedalling 3-speed roadsters. KL+West Norfolk BUG incl social easy rides http://www.klwnbug.co.uk
All the above is CC-By-SA and no other implied copyright license to Cycle magazine.
Top

mjr wrote:.....
I hope that the People's Vote campaign for a third referendum, this one on a real deal and not unicorns and rainbows, keeps building momentum, but I don't really expect it to succeed in time.

Some people (experts who should know?) are saying there is now not time to sort a referendum before we leave anyway. What I can't understand is why Parliament has suddenly become incapable of repealing legislation it has made. Plus I'm sure the EU would extend the 2 years if it were to give the UK time for a referendum.

Last week there were polls apparently showing that Labour would gain 1.5m votes were they to back a 2nd referendum (https://www.theguardian.com/politics/2018/sep/20/labour-could-win-15m-more-votes-by-backing-brexit-referendum), I do wonder if Labour might start being more positive about a 2nd referendum (particularly as May's future is getting ever more precarious).

I'm going to guess that Labour are well aware of the danger of pushing for a referendum in which Leave With No Deal is one of the options.

If this was the 'winning' choice, Labour would be in exactly the same position the Tories are in now, completely unable to deliver what was voted for.

There is a significant risk this option would win, especially bearing in mind the near-demented coverage of Salzberg in the press.
Top

From another thread but also appropriate here:

pjclinch wrote:I can't understand why people are not far more concerned with the really important issues around passports. Like their colour. 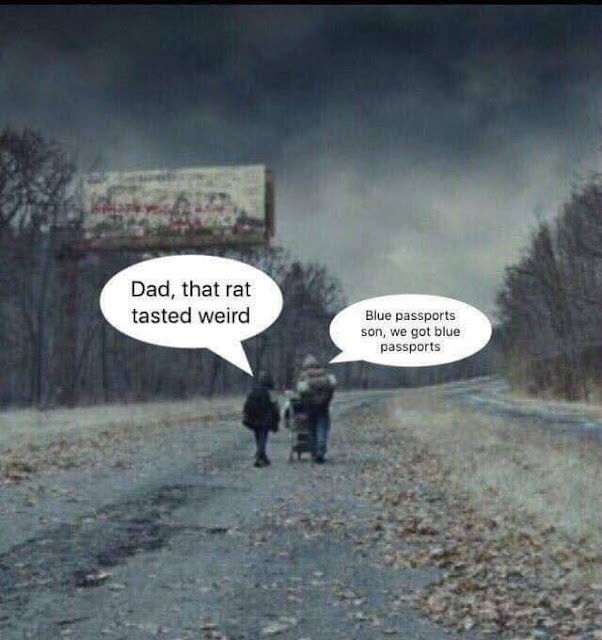 ....as anyone with an atom of commonsense and moral could have predicted months ago.

A few days ago I recall posting a link to a prediction about street riots in the event of a 'no deal' outcome. Perhaps we should be prepared for them. Indeed, I'm not sure I wouldn't be applauding the rioters, rather than condemning them. Especially if they go for those bastions of Little Englander Brex**iteerism: the boozer, the fast-food outlet, the gambling den, etc. etc.

Is my 'card marked' now with MI5, for posting that? As if I care!

Suppose that this room is a lift. The support breaks and down we go with ever-increasing velocity.
Let us pass the time by performing physical experiments...
--- Arthur Eddington (creator of the Eddington Number).
Top

After Salzburg, looks like Brexit fantasy may finally be starting to meet reality.

They need us more than we need them?
Easiest negotiation in history?
Top

pjclinch wrote:I can't understand why people are not far more concerned with the really important issues around passports. Like their colour.

Up a smelly brown creek without a paddle.
As for May she won't be long in the job and a GE isn't far off IMHO.

And the next Tory leader will be a whole lot worse than May, who has dug us into this mess without even believing in brexit. I can't abide any Tories, but I suspect she has at least a little regard for the welfare of the 90% of the population who will suffer most from the isolation the brexit leaders crave.
Top
Locked
21766 posts