by mercalia
"Give not that which is holy unto the dogs, neither cast
ye your pearls before swine, lest they trample them
under their feet, and turn again and rend you."

seems like a Chinese company has learnt that lesson the hard way?

"I really wanted to believe that Mancunians could be trusted with nice things. Just over a fortnight ago, a Chinese company called Mobike brought 1,000 shiny new silver and orange bikes to my city. Unlockable with a smartphone and available to rent for just 50p for half an hour, they could be ridden wherever you liked within Manchester and Salford and, crucially, could be left anywhere public once you were done.... 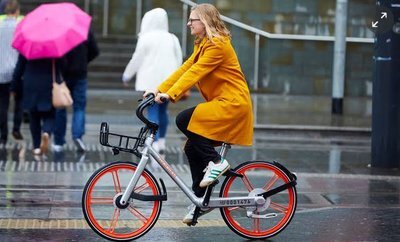 Two weeks on and I fear that a dream is all it was. There are Mobikes in the canal, Mobikes in bins and I am fed up with following the app to a residential street where there is clearly a Mobike stashed in someone’s garden. ...

On Thursday, none of the eight bikes showing on the app as being near my house were actually there. I was so incensed when I reached the location of the ninth and could see it locked away in a backyard that I lost control of my senses and knocked on the door. A young man opened it and I asked nicely if I could rent the bike. He looked surprised and said, no, it was his, and anyway, he needed it later. I explained that was not how the system worked, that the bikes were public, and that if everyone was as selfish as him the whole thing would collapse. He rolled his eyes and told me I would be trespassing if I dared try to fetch it."

by ChrisOntLancs
this is why we cant have nice things

talked to a couple of people on them and they think they're great, it's a great idea, and why wouldn't it be? there's always that small percentage of people that don't have a sense of responsibility, or gratitude. i think about people that aren't paid great wages, they're living some ways out of town and have to spend a huge chunk of their wages on public transport. they're the people who will be missing out when the prices of deposits and/or hire are increased.

a lot of people just don't care about other people, and i don't think it's geographical, or even to do with class (as people have inevitably suggested). it's that sense of community. people don't care because they have no emotional investment besides themselves, and sticking a bee on your car isn't going to change that.

kids smash up a bus stop because it's something to do, and they're not the ones getting soaked on the way to work in the morning.

by [XAP]Bob
Maybe they need to set up a monitoring scheme to ensure that the bikes are actually used by multiple people - and available for use.

I presume there was a 'report this bike as locked away' option in the app - at which point the last user gets charged...

The limited availability of docking stations can be a pain for other sharing schemes, but it does also mean that bikes are returned to known, and generally reasonably convenient, places when not in use by the hirer.

by ChrisOntLancs
i think docking "zones" would be a great compromise between the two problems - people complaining that they have nowhere to dock the bike vs people docking the bike inside their home. i believe there is some GPS magic that prevents them being left on private property, so i don't see why that same tech couldn't be used to make sure they're only left in certain areas. i mean "anywhere outside this big box is not allowed, but it's a big box and you can literally just leave it there". if the ban is for private properties it's a bit too specific to self-police, and the margin of error is very slight.

by LollyKat
From the full article:

by RickH
It does need to be a "dockless" system to suffer vandalism - http://www.bbc.co.uk/news/uk-northern-ireland-40481065 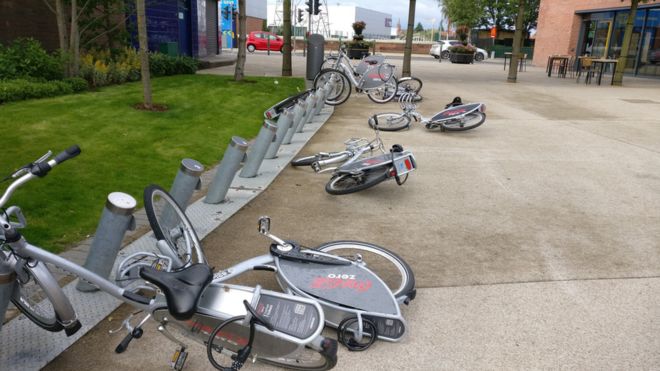 mercalia wrote:"Give not that which is holy unto the dogs, neither cast
ye your pearls before swine, lest they trample them
under their feet, and turn again and rend you transportless

My bold
Says it all really,doesn't it?
Morons abound

i'd expect nothing less from the pretend lefties at the guardian

owen jones wrote a book about demonisation of working class people, now he bullies them on twitter.

this behavior comes from all walks of life, it just manifests itself in different forms.

by 661-Pete
I fail to see any connection between the vandalising of these mobikes and 'working class people', whether demonised or not. The article does not state the income or occupation of any of the perpetrators.

661-Pete wrote:I fail to see any connection between the vandalising of these mobikes and 'working class people', whether demonised or not. The article does not state the income or occupation of any of the perpetrators.

I agree, but from which ever group the culprits come from it just shows their mindlessness,

by Si
Interesting to see how these schemes compare.

With ours (Big Birmingham Bikes) we intended to give out about 3500 bikes to people from deprived areas - all they had to do was either do L2 bikeability or sign a disclaimer to say they were safe on the road, and promise to use the bike frequently or give it back. The immediate reaction was: "never work - they'll all be on ebay as soon as they are given out, no one will look after them, thousands of people will get killed due to bad riding" etc. Turned out rather different. We've had a handful appear on ebay (and after a friendly chat the sellers were persuaded to keep it and use it, or give it back), most have had good use (bear in mind many went to people who didn't previously cycle so a few miles each week is all we ask), they seem in pretty good condition for the most part, and we've had no more crashes reported than you'd expect from people with shop bought bikes.

Some major pluses too: they've helped to create 12 (I think...maybe more by now...they keep springing up) CUK and BC Community Cycling Clubs in placed where'd you'd never normally expect to see much cycling. A number of volunteers from these CCCs have become bikeability instructors and are teaching many more people to ride. Also the city's schools bikeability scheme has been taken over and dramatically expanded by Big Birmingham Bikes. The success of this cycling initiative has also helped us to get the go -ahead for our first proper continental style segregated cycleways along major routes.

I regularly talk to people who have benefited from being given one of these bikes and by and large they love them, and in a number of cases it's been life changing.

We are about to start the next round: 2000 adult bikes to give away plus a bike library scheme for children's bikes.....get a free bike, if they use it enough they can trade it in for the next size up when they out grow it, the old one being refurbed and put back into the system for someone else.

So in our case, yes we did do the scheme differently, but it has been a major success...hard bloody work....but a major success. And we've found that people have been very respectful and grateful, but more than that: one of the best things is that a good number have wanted to give something back and have done all sorts of volunteer stuff to help their communities, thus making the whole thing much more sustainable.
All times are UTC
Page 1 of 1
Powered by phpBB® Forum Software © phpBB Limited
https://www.phpbb.com/