by Mick F
They've got it bad Up North. Nowt here, just a tad windy. Bright, sunny and dry.

How's it with you?

by philvantwo
Nearly 5 inches up here in the Midlands mick f!

by thirdcrank
We had a light dusting on Thursday evening, but it froze hard so the pavements were treacherous. No reports of anybody trapped on Shap (old joke there

by tatanab
South West Midlands, about 5" since 4 a.m. and still falling steadily. Some rural roads closed, motorists steadily turning main roads into ice rinks. I did not go out today because I would have had to remove mudguards to stop clogging and I could not be bothered - and it is nice and warm by the computer versus just below freezing outside.

by Mick F
Our daughter was going to be driving down here from Bedford later today, but there's so much snow there, she can't at present get the car out. As far as I can tell, the main roads and motorways are slow and difficult, with temps at or below freezing, so she's not coming.
You have to get past Exeter before the temperature is ok.

Here, is bright and sunny, and our washing is getting a good blow on the line.
Temp at +10degC

by PDQ Mobile
N Wales has a fair bit of snow.
The higher the route the more testing/ difficult it will be.
At sea level and close to the coast there's very little. (in the West, North coast might be different)
Above 100 to 200 meters is where the freezing level is at moment.
Though there is wet snow lower than that.

by reohn2
They promised us 10 to 20cm last night and got nowt,there's the odd flake ATM but the sky doesn't look laden so I'm expecting it'll just remain cold for the time being.
I wonder what it's like in Vorpal's neck 'o the woods 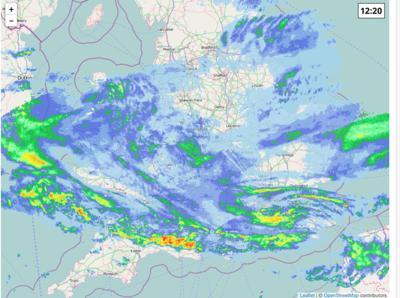 by gaz
Woke up to a light dusting, maybe 1/4 of an inch. Rain has set in since, much less left now.

by PDQ Mobile
Re, Precipitation radar.
I think the radar for the whole of Europe is always much more interesting!!
It shows much better how the weather systems develop and move. The big picture!

by thirdcrank
I don't know whether to be pleased, or paranoid about my data security.

Within a couple of minutes of posting about my washing machine above, an open-backed tranny arrived and took it away. Normal service resumed or am I being tapped?

by NATURAL ANKLING
Hi,
A few miles from south devon coast, I can sit in my lounge and see Haytor dartmoor

by [XAP]Bob
Just been out and cleared and salted a path to the local shops from way up the road.