Use this board for general non-cycling-related chat, or to introduce yourself to the forum.
Post Reply
260 posts

Gulls and how they work out how to steal food

hi,
The rats are back no solution to that I'm afraid.
Both the bird boxes I put up Seem to be occupied.
Blue tits are in the blue tit box.
No idea what's in the other box which has a sparrow size hole, This is a home-made brand-new box which has not been occupied for a year since I put it up.
Straw poking out of both holes.
Several tits in the bush on the end of the garage, blackbirds there always.
Bird table doesn't get much use because it's being raided by the rats/Rat?
Ground hedge Sparrow's, forgot their name now?
On the ground around the feeding box by the bush.
Robbins to hanging around.
One pigeon only now and again.
Mostly driedMeal worms, Other stuff like suet and nuts which are high calorific value, I've put down a few but thinking that they will be good food for the rat so on limiting that food.
NA Thinks Just End 2 End Return + Bivvy
You'll Still Find Me At The Top Of A Hill
Please forgive the poor Grammar I blame it on my mobile and phat thinkers.
Top

I have two squirrels who climb up the wall 3 floors up for free meal. You can easily tell them apart now as one , like last year has started to lose fur around its neck area & shoulders from fleas due to staying in its nest during the cold weather and the second one still has a 100% coat, presumably as eiher its nest isnt infested or it isnt staying inside so much.
Top 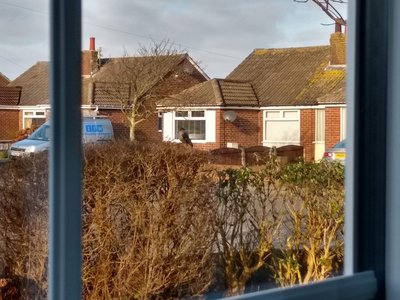 Sparrow Hawk ? chasing sparrows in and out of the bush. Active for quite a few minutes but didn't catch any. As he dived and circled the bush the sparrows scurried to the other side out of the way. In the end it gave up and flew away.
You'll never know if you don't try it.
Top
Post Reply
260 posts