Use this board for general non-cycling-related chat, or to introduce yourself to the forum.
Post Reply
360 posts

Hi,
Me lottoloadamoney tickets ran out.......thanks for reminding me to buy some more

Edited I just thought most of my wins come from Euromilions, I we crash out will I be excluded from the Euro lottery?
NA Thinks Just End 2 End Return + Bivy
You'll Still Find Me At The Top Of A Hill
Please forgive the poor Grammar I blame it on my mobile and phat thinkers.
Top

Just buy an Irish lottery ticket through your nearest bookies. Perhaps that would be the way to buy euro millions if the UK gets kicked off it.

Of course I believe it's run by a UK company so perhaps it gets the Brexit condition and only gets sold to UK with Europe getting cut out.
Top

Yeah. The problem with Brexit campaigners is that they think just this: that the laws of politics, the land, and yes, even physics* bend to their rhetoric. They're wrong, hence the omnishambolic clusterschmozzle that we’re now suffering

I don't think there are any climate change deniers.
The argument is WHY there's climate change, not that it doesn't exist.
Mick F. Cornwall
Top

Tangled Metal wrote:Just buy an Irish lottery ticket through your nearest bookies. Perhaps that would be the way to buy euro millions if the UK gets kicked off it.

Of course I believe it's run by a UK company so perhaps it gets the Brexit condition and only gets sold to UK with Europe getting cut out.

It's run by Camelot in partnership with FDJ and Spain's SELAE. I suspect the prize is paid to UK winners by Camelot from the UK, so it'll be unaffected by any extra transaction charges if we leave the Single European Payments Area (and that's not inextricably linked to the EU, as Switzerland is in SEPA, but May seems determined to bonkersly leave anything with "European" in the name), although maybe Camelot's costs will go up and they'll pass that on.
MJR, mostly pedalling 3-speed roadsters. KL+West Norfolk BUG incl social easy rides http://www.klwnbug.co.uk
All the above is CC-By-SA and no other implied copyright license to Cycle magazine.
Top

[...] Yes, we could export/import smoothly before joining the EU and we probably could again with time to transition, but we never tried to double the volume of goods being checked at the border overnight, did we? That's how crashing out will cause problems.

[...]Again. Looking into your Chrystal ball how crashing out will cause problems. Bit hysterical 'crashing out'. If it was properly planned and using modern technology, double volumes should not be a problem IMO.
By the way. Any chance of the winning lottery numbers.

Oh come on! "Crashing out" is a widespread name for it, so don't criticise me for using it. Even officially, it's called "a disorderly departure". It's only the most extreme Leavers and their friends at places like the BBC who are trying to sanitise breaking our treaties and commitments with peaceful terms like "a no-deal Brexit" or "WTO terms".

It doesn't take much of a crystal ball now that we are so close to it happening. Some of the costs of no-deal are already being borne by businesses who feel it's mission-critical to prepare for it.

PS - please use the quote function properly, else the site doesn't send me notifications.
MJR, mostly pedalling 3-speed roadsters. KL+West Norfolk BUG incl social easy rides http://www.klwnbug.co.uk
All the above is CC-By-SA and no other implied copyright license to Cycle magazine.
Top

When I took my wife her morning cup of tea there was an item on the telly with the strapline "Should we be panic buying?" Whatever the answer, the media seem keen to promote the next big story.
Top

It's a miscarriage of democracy. Leave only won because it lied, promising all things to all people, and it looks like getting away with it.

Evidently the Remain camp did a fair amount of lying and brainwashing at the taxpayers expense. How could you or anybody even know for a fact the reason 17 milion people voted? I don't even remember any promises. How ridiculous!

I don't claim to know the reason all 17 million people voted, but Leave didn't win by 17m. It won by about 1.3m, which is notable in two ways: firstly, it means just 650,000 voters change their minds and the result goes the other way; and secondly, it's considerably less than the 3m UK nationals denied a vote because they've lived abroad too long.

What I do claim is that Leave's lies won them more than 650,000 votes and more than 1.3m - that much seems pretty certain from the extensive analysis done by http://www.LordAshcroftPolls.com and others.

No idea why you're bringing the Remain camp into this and how can you not remember the NHS/£350m promise? Here's a photo to refresh your memory: 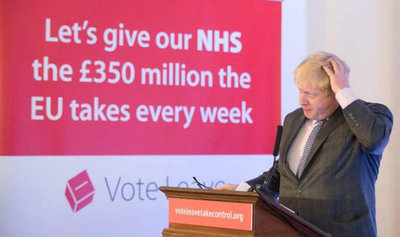 A lot depends on the definition of a promise. Think more of "aspirations" - a common word when politicians fail to deliver.
Top

Tangled Metal wrote:When oil prices zoomed up did petrol suddenly stop being supplied or did the price just go up and everyone moaned but still bought it?

When oil supply fell abruptly, not only did the price go up sharply but usage was limited, leading to motorways becoming fun new picnic areas:

No amount of demand will help if the supply cannot get through unprepared ports. That isn't doom and gloom - it's realism. It'll give me no comfort to say "told you this was going to hurt the country" - I would much rather Leavers woke up now and avoided doing this damage.

I take it you're referring to the 70s. I was actually referring to more modern times personally (I was 7 or 8 at the end of the 70s) so less relevant to my view of the current situation.

So when did you mean, then? I'm not going to keep playing this guessing game.

Tangled Metal wrote:More recently high prices haven't been an issue. There's no supply issue at the moment. If you're thinking after March there will be a drop in supply then I doubt that will happen. Not long now to find out.

Probably less likely for oil than many products because we don't import much oil from the EU. A lot will depend on how Norway treats us. https://www.statista.com/statistics/381 ... ingdom-uk/

Tangled Metal wrote:Right now my view is the truth of Brexit will not be a cliff edge nor will it be a unicorn future of amazing trade deals around the world to account for losses in trade with EU.

I'd agree with that. The main risk of a cliff edge is if the borders are completely screwed up but even then, that's likely to be fixed as a priority. I still reckon there's going to be huge short-term economic damage from the loss of so many trade deals and because it'll take a couple of months to become apparent, we'll probably see more lying Leavers trying to shift blame to anything else that happens in the meantime, or onto Remain supporters yet again for not getting behind a cause we don't believe in.
MJR, mostly pedalling 3-speed roadsters. KL+West Norfolk BUG incl social easy rides http://www.klwnbug.co.uk
All the above is CC-By-SA and no other implied copyright license to Cycle magazine.
Top

thirdcrank wrote:A lot depends on the definition of a promise. Think more of "aspirations" - a common word when politicians fail to deliver.

No way, not this time. Vote Leave crossed the line: they stood on a platform saying (literally - see above) "let's do X" and many people then voted for them on the basis that they would do it. May can witter on about what people voted for, but it's pretty clear that more of them voted for the NHS to get £350m/week more than voted for, say, spending a currently-estimated £500m/week on leaving the common market.
MJR, mostly pedalling 3-speed roadsters. KL+West Norfolk BUG incl social easy rides http://www.klwnbug.co.uk
All the above is CC-By-SA and no other implied copyright license to Cycle magazine.
Top

Nope.
They are deniers that it's mankind doing it.
Mick F. Cornwall
Top

Nope.
They are deniers that it's mankind doing it.

You stitched me up good and proper there Mick

Anyway it was a good opportunity to post a link to further discredit some of the 'expert deniers'.
Top

Climate change denial is a fruitcake idea, promoted by many of the illuminati of the Brexit movement, including, but not limited to: Peter Lilley, Owen Paterson, Graham Stringer, John Redwood etc

The economics of Brexit are utterly fruitcake.

Fruitcakes should be on plates, not in politics.

[if you really want to debate the semantics of climate change denial, I suggest you start a separate thread.]
Top
Post Reply
360 posts