Use this board for general non-cycling-related chat, or to introduce yourself to the forum.
Post Reply
7 posts • Page 1 of 1

... Living in his nowhere land.

With 40 odd days left till Britain's exit, the man, the architect of the vote is keeping an ultra low profile that makes Lord Lucan look conspicuous.

Where all of his contemporaries have done well, moved on, Osborne a successful newspaper man, Clegg living la vida in California working for Facebook, poor old condom head is stuck yeah verily in an absurd rut.

Will Cameron always be the man who wrecked his country, in a clumsy attempt to save his party? At worst, a bad Brexit could break not just the economy, but the union – giving Scotland new reasons to seek independence, even pushing Northern Irish voters towards unification with the south. He could be the man who broke up Britain. What a legacy... 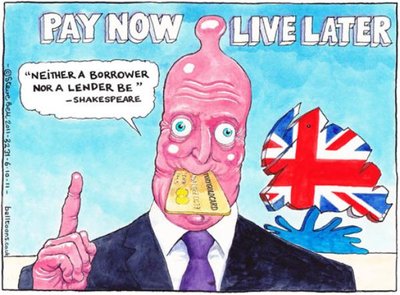 Making all his nowhere plans for nobody

Doesn't have a point of view.

Knows not where he's going to.
Top

Has anyone searched all the pig farms?
Suppose that this room is a lift. The support breaks and down we go with ever-increasing velocity.
Let us pass the time by performing physical experiments...
--- Arthur Eddington (creator of the Eddington Number).
Top

well raised your spirits a bit from this dismal thread
Top

Well the Guardian knows where and what he has been doing