Use this board for general non-cycling-related chat, or to introduce yourself to the forum.
Post Reply
85 posts

Always reminds me of the first day at grammar school, when they were just finishing the roof of the new school canteen & kitchen. Excitement, trepidation, awe at the fine edwardian building and the masters sweeping about in long black capes, wearing a frown for all small boys, especially the new ones.

Well, the last one (baking, especially ladywife bread) but not them others. Perfumed ladies - yuk, especially if they're plastered with a ton of face muck so they look like a-one o' them animated dollies in Boots. Real ladies smelling of themselves. Much nicer.

Creosote - sort of remarkable, especially when it rots your sinus.

How does one deal with (clean) a dog stinking of dead deer, put him out in the dog hoose awhile?
Entertainer, juvenile, curmudgeon, PoB, 30120
Cycling-of course, but it is far better on a Gillott
We love safety cameras, we hate bullies
Top

My favourite smell at the moment, is the warm puppy smell.
Sailor, our border collie is now three months old and loves walks and fresh air.

Three dog-smellers! I do not have a dog but I must try smelling one

Here he is, fast asleep in his bed.
Have a sniff! 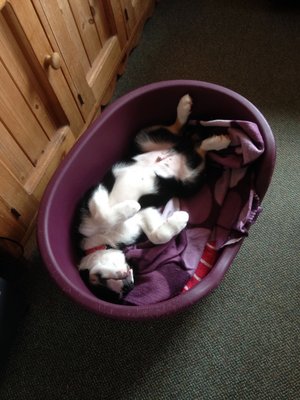 Plus One! I love to hate dogs actually, never had one but I used to borrow a neighbours dog, he went crazy when he saw/smelt me cos he knew: bryn means walkies!
..
Sailor,what sort of name is that for a dog?

Can he swim?
Entertainer, juvenile, curmudgeon, PoB, 30120
Cycling-of course, but it is far better on a Gillott
We love safety cameras, we hate bullies
Top

Favourite smell is of Honeysuckle, lovely when you cycle past.
I'm looking after a friends house while she's away. Each time I check it I'm reminded she has two dogs, one some sort of spaniel. Truely horrible smell

. I don't think she notices it.
Top

Riding by the canal there is a lovely stink of wild garlic
Entertainer, juvenile, curmudgeon, PoB, 30120
Cycling-of course, but it is far better on a Gillott
We love safety cameras, we hate bullies
Top

Cyril Haearn wrote:How does one deal with (clean) a dog stinking of dead deer, put him out in the dog hoose awhile?

When I walked Monty the German Pointer who belonged to Daughter Two (when she was all day at college or working a 12 hour day shift as a psycho-nurse) he would often perform the rot-rolling. He was, anyway, usually covered in estuary mud ... to an alarming degree.

I would walk 10 or 11 miles with the beast; he would do 5X that running up and down the Lune Estuary when the tide was out, We'd both be ready for a freshen up when we got back. It's the shower, then - a big one upstairs.

To get Monty in the shower was not easy, least of all because I couldn't let him trapse through the hoose wagging and padding clarts over every single thing. So, I kept him by the back door, got nekkid, nipped out the door when no neighbour was peering over the fence, picked up Monty in both arms then marched us both up the stairs into the big shower, carefully avoiding the wallpaper.

Marching nekkid through the hoose with a squirming evil-smelling muddy pointer in your arms has a peculiar sort of pleasure to it. Monty thought not, mind, and would squirm then moan when in the shower. For a dog that loved to throw himself about in the tideline or down a filthy wet bog 'ole, he had a strong dislike of the shower and it's wetting of his doggy person......

Cyril Haearn wrote:Riding by the canal there is a lovely stink of wild garlic

Lancaster canal atween Haverbreaks and Galgate will be awash in the wild garlic about now - swathes and swathes of it, gripping the eye and nose. 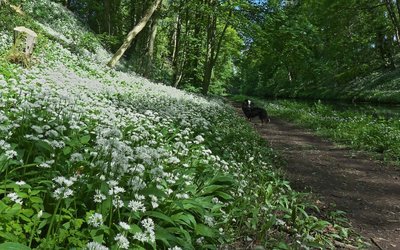 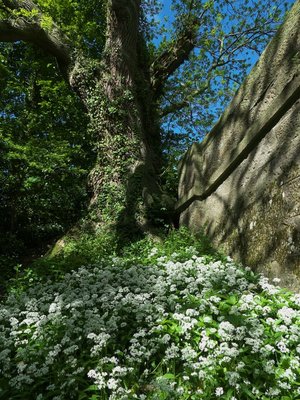 Mick F wrote:Here he is, fast asleep in his bed.
Have a sniff! 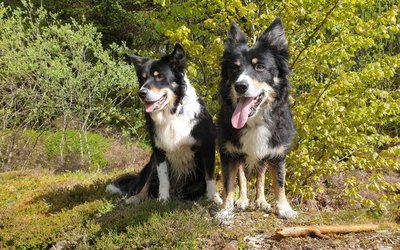 Resting from the stick 1 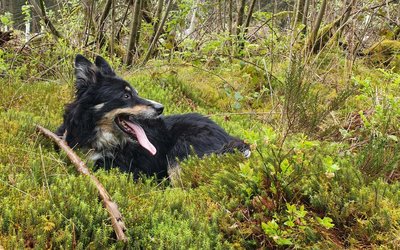 Resting from the stick 2 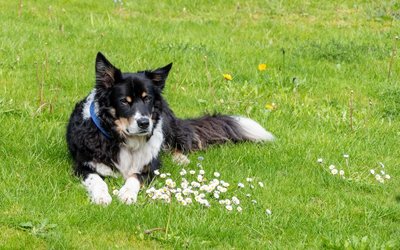 Tricolours.
Sailor is our fifth BC and our first tricolour. He's got brown bits in his ears and on both back legs plus the odd bit elsewhere.
He's fast asleep now having had a good walk through our woods.

He'll be walked again this afternoon I would think. He's allowed on the roads now, but scared stiff of cars. He's going to take quite some acclimatising to the vehicles on the roads.
Mick F. Cornwall
Top

@bryn: dry dog is best. Our two, a good while ago now:

https://youtu.be/4T16EJJ1Xfw
Have we got time for another cuppa?
Top
Post Reply
85 posts