by Pastychomper
Another ex-cartridge-user here. One of my schools mandated fountain pens and Parkers were all the rage (to the point that I was sometimes mocked for not using one). I tried one for a while but it flowed faster than the cheap pens I was used to, wasting ink and giving thick lines that didn't work well for my small writing. I still keep a cheap fountain pen for when I want to write neatly.

I used to be a fan of Pilot's tiny-tipped, liquid-ink rollers for making tiny notes in margins, but don't bother so much these days. Now I'm into mechanical pencils, preferably 0.7mm and metal-barrelled. I often have artificially greasy skin, which interferes with a lot of cheap ballpoints.

by skyhawk
Hmm interesting thread, can't read it all, I don't collect pens but have two rolled gold Cross pens and a chrome one I use all the time

I have a tablet, somewhere, no idea where 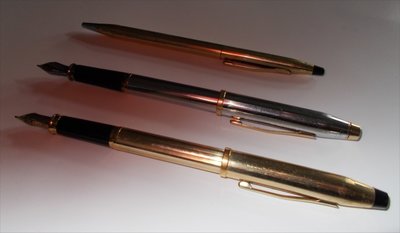 by tatanab
At school (1960s) Platignum and Osmiroid were the usual fodder. One chap had a Parker which we lusted after. I've had several cheap Parkers since. I do not recall anybody using anything other than fountain pens be it cartridge or ink sac. Although I seldom use it, these days I quite like my Pilot Vanishing Point, primarily because it is different.

by fausto copy
Anyone remember Osmiroid? (Edit- someone beat me by 2 minutes

)
I bought one through primary school as it was recommended for us left-handers.
The tip of the nib curves left so it's supposed to write smoother.
Never worked for me.
Now I tend to use Excel notebooks

and if writing letters to my Godmother in Australia, I choose Apple Chancery as the font, so it looks like nice handwriting.

by Tangled Metal
Anyone remember those plastic pens with a kind of fake FP nib. The ink wicked from the reservoir through the plastic nib and it kind of wrote like a calligraphy pen with a thick and thin writing direction. I thought it was a pentel but can't see it.
All times are UTC+01:00
Page 2 of 2
Powered by phpBB® Forum Software © phpBB Limited
https://www.phpbb.com/